China Takes Over Lead From Europe In 2013 Photovoltaic Installations

A booming photovoltaic market in Asia has propelled China to a global leader in photovoltaic energy installations in 2013, according to the latest edition of the JRC’s PV Status Report.

The EU has retained its domination in cumulative installed capacity – its total of 80.7 GW represents a 57 % share of the world’s 140 GW of solar photovoltaic electricity generation capacity at the end of 2013. However, this is down from a 70% share in 2012, reflecting Europe’s stagnating market.

The report combines up-to-date information on photovoltaics in 2013, collected from public and commercial studies and own research. It finds that despite an overall drop in solar energy investments – amounting to 23% compared to 2012 – the falling prices for photovoltaic cells and modules have allowed for a 23% increase in the annual installation capacity with respect to the previous year.

The photovoltaic industry has changed dramatically over the last few years, with markets shifting due to a greater demand in Asia: from the total of 39.5 GW of new installations in 2013, 12.9 GW were set up in China and 7 GW in Japan. For a first time China has left behind the EU (10.6 GW), which has dominated the market in the past decade. 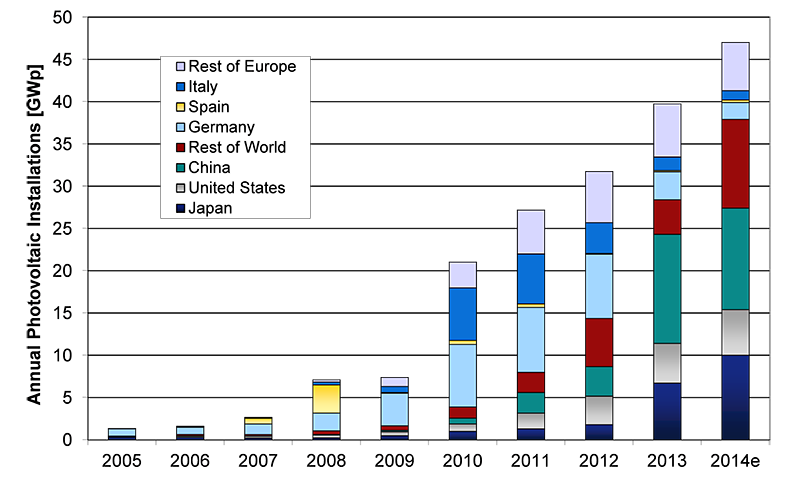 Since 2005, solar photovoltaic electricity generation capacity in the EU has increased from 1.9 GW to 80.7 GW at the end of 2013. It can cover 2.9% of EU’s electricity demand, or the electricity needs of Belgium or Finland. But EU’s share globally is declining both in relation to the growing market worldwide and in actual installation figures.

Its share in cumulative capacity, amounting to 70% in 2012 and 57.6% in 2013, is projected to fall below 30% by 2020, according to a forecast by the International Energy Agency (Medium-Term Renewable Energy Market Report 2014) due to a shrinking market. Such development is partly a result of supporting schemes in some member states which missed to adequately address the very rapidly growing market.

The biggest drop in photovoltaic installations was recorded in Germany (from 7.5 GW in 2011 and 7.6 GW in 2012 to 3.3 installed GW in 2013) and in Italy, where it was more than halved compared to the new installations in each of the previous three years.