Cassiopeia A, or Cas A for short, is one of the most well studied supernova remnants in our galaxy. But it still holds major surprises. Harvard-Smithsonian and Dartmouth College astronomers have generated a new 3-D map of its interior using the astronomical equivalent of a CAT scan. They found that the Cas A supernova remnant is composed of a collection of about a half dozen massive cavities - or "bubbles."

This composite image shows two perspectives of a three-dimensional reconstruction of the Cassiopeia A supernova remnant. This new 3-D map provides the first detailed look at the distribution of stellar debris following a supernova explosion. Such 3-D reconstructions encode important information for astronomers about how massive stars actually explode. The blue-to-red colors correspond to the varying speed of the emitting gas along our line of sight. The background is a Hubble Space Telescope composite image of the supernova remnant. 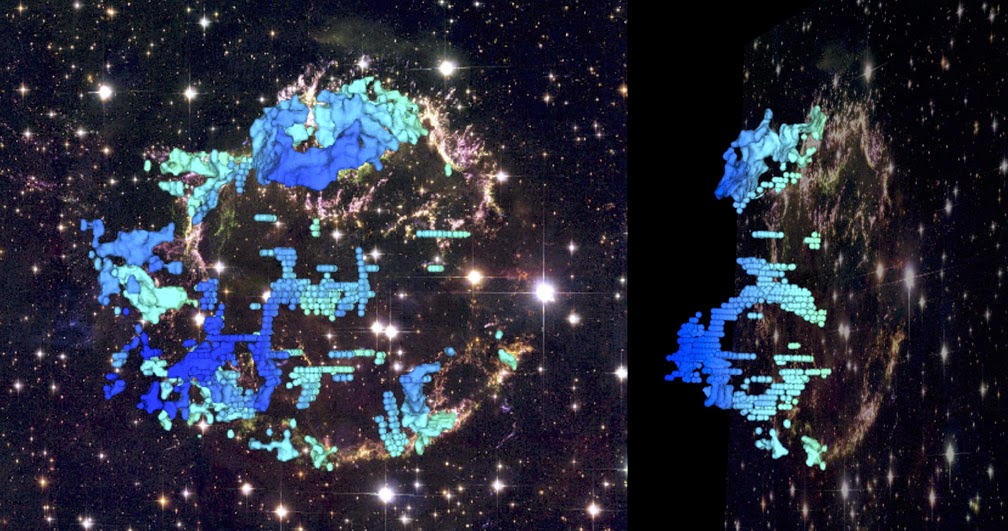 "Our three-dimensional map is a rare look at the insides of an exploded star," says Dan Milisavljevic of the Harvard-Smithsonian Center for Astrophysics (CfA). This research is being published in the Jan. 30 issue of the journal Science.

About 340 years ago a massive star exploded in the constellation Cassiopeia. As the star blew itself apart, extremely hot and radioactive matter rapidly streamed outward from the star's core, mixing and churning outer debris. The complex physics behind these explosions is difficult to model, even with state-of-the-art simulations run on some of the world's most powerful supercomputers. However, by carefully studying relatively young supernova remnants like Cas A, astronomers can investigate various key processes that drive these titanic stellar explosions.

A photograph of Cas A from NASA's Chandra X-ray Observatory reveals the supernova remnant's complex structure. In this representative-color image low-energy X-rays are red, medium-energy ones are green, and the highest-energy X-rays detected by Chandra are colored blue. 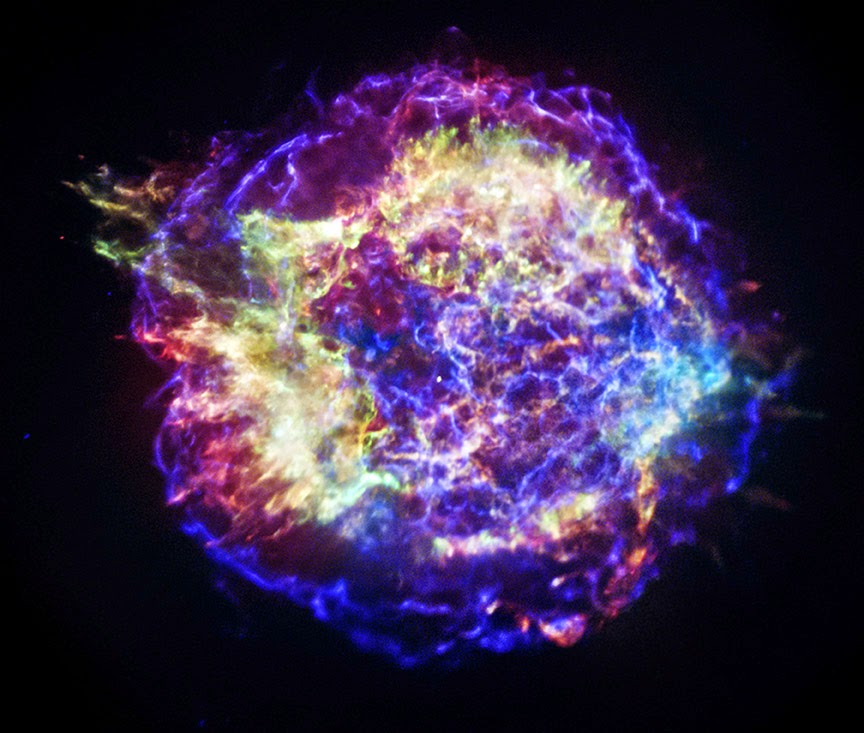 "We're sort of like bomb squad investigators. We examine the debris to learn what blew up and how it blew up," explains Milisavljevic. "Our study represents a major step forward in our understanding of how stars actually explode."

They found that the large interior cavities appear to be connected to - and nicely explain - the previously observed large rings of debris that make up the bright and easily seen outer shell of Cas A. The two most well-defined cavities are 3 and 6 light-years in diameter, and the entire arrangement has a Swiss cheese-like structure.

The bubble-like cavities were likely created by plumes of radioactive nickel generated during the stellar explosion. Since this nickel will decay to form iron, Milisavljevic and Fesen predict that Cas A's interior bubbles should be enriched with as much as a tenth of a solar mass of iron. This enriched interior debris hasn't been detected in previous observations, however, so next-generation telescopes may be needed to find the "missing" iron and confirm the origin of the bubbles.

The researchers have posted an interactive version of their 3-D map online at https://www.cfa.harvard.edu/~dmilisav/casa-webapp/.