Bubbles Half The Size Of The Milky Way

Compared to other galaxies, the Milky Way is a peaceful place. But it hasn't always been so sleepy. In 2010, a team of scientists working at the Harvard-Smithsonian Center for Astrophysics discovered a pair of "Fermi bubbles" extending tens of thousands of light-years above and below the Milky Way's disk.

From end to end, the newly discovered gamma-ray bubbles (magenta) extend 50,000 light-years, or roughly half of the Milky Way's diameter. 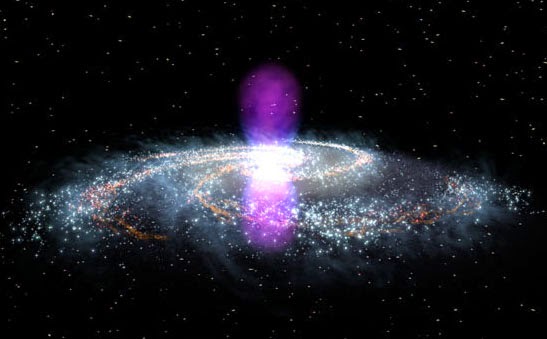 Fresh from giving the January 6 Rossi Prize lecture at the Winter American Astronomical Society meeting, three physicists who discovered the Fermi bubbles - Douglas Finkbeiner, Tracy Slatyer and Meng Su - spoke with The Kavli Foundation, revealing that studies of the Fermi bubbles may offer insight into the history of our galaxy. With more study, they could also help in the hunt for dark matter.

"It now seems that, in the past, our black hole was tens of millions of times more active than it is currently," said Meng Su, a Pappalardo Fellow and an Einstein Fellow at the Massachusetts Institute of Technology and the MIT Kavli Institute for Astrophysics and Space Research. "Before the discovery of Fermi bubbles, people were discussing that possibility, but there was no single piece of evidence showing that our black hole could be that active. The Fermi bubble discovery changed the picture."

Hints of the Fermi bubbles' edges were first observed in X-rays (blue) by ROSAT, which operated in the 1990s. The gamma rays mapped by the Fermi Gamma-ray Space Telescope (magenta) extend much farther from the galaxy's plane. 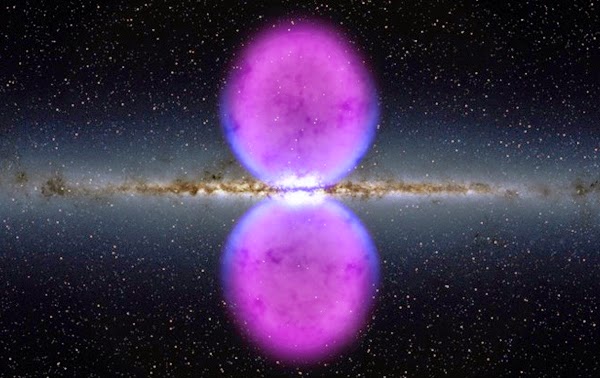 But that's not all. Further study of the Fermi bubbles, which the astrophysicists first discovered when looking for dark matter, may in fact help identify dark matter. That's because the center of the galaxy, from whence the bubbles originate, is thought to be one of the best places to find evidence of dark matter. Such evidence could be detected as an excess of gamma rays, produced when dark matter particles interact with one another. To find that excess, astrophysicists will need to thoroughly understand the Fermi bubbles. That understanding will allow the researchers to confidently subtract the gamma rays emitted by the Fermi bubbles from the overall gamma-ray signal before looking for an excess of gamma rays coming from dark matter.

Data from the Fermi Telescope shows the bubbles (in red and yellow) against other sources of gamma rays. The plane of the galaxy (mostly black and white) stretches horizontally across the middle of the image, and the bubbles extend up and down from the center. 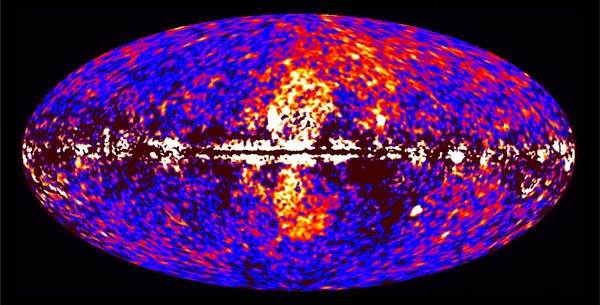 In some of the most accepted models of dark matter, "we expect the signals from the galactic center to be significantly brighter than anywhere else in the sky," said Tracy Slatyer, an assistant professor of physics at the Massachusetts Institute of Technology and an Affiliated Faculty member at the MIT Kavli Institute for Astrophysics and Space Research. "So just giving up on the galactic center is not generally a good option."

Indeed, Slatyer continued, there are already hints of dark matter appearing in gamma-ray maps of the galactic center - hints that may eventually lead to the discovery of dark matter.

Douglas Finkbeiner, a professor of astronomy and of physics at Harvard University and a member of the Institute for Theory and Computation at the Harvard-Smithsonian Center for Astrophysics, agreed.

Contacts and sources:
Kavli Institute for Astrophysics and Space Research
on January 28, 2015