Scientists led by University of Birmingham asteroseismologists have discovered a solar system with 5 Earth-sized planets dating back to the dawn of the Galaxy.

Thanks to the NASA Kepler mission, the scientists announced today (Tuesday 27 January 2015) in The Astrophysical Journal the observation of a Sun-like star (Kepler-444) hosting 5 planets with sizes between Mercury and Venus.

Illustration showing Kepler-444, which hosts five Earth-sized planets in very compact orbits. The planets were detected from the dimming that occurs when they transit the disc of their parent star, as shown in this artist's conception. 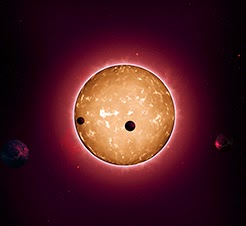 Kepler-444 was formed 11.2 billion years ago, when the Universe was less than 20% its current age. This is the oldest known system of terrestrial-sized planets in our Galaxy - two and a half times older than the Earth.

The team carried out the research using asteroseismology - listening to the natural resonances of the host star which are caused by sound trapped within it. These oscillations lead to miniscule changes or pulses in its brightness which allow the researchers to measure its diameter, mass and age. The planets were then detected from the dimming that occurs when the planets transited, or passed across, the stellar disc. This fractional fading in the intensity of the light received from the star enables scientists to accurately measure the size of the planets relative to the size of the star.

This animation starts by showing us Kepler's field-of-view in the direction of the constellations Cygnus and Lyra. We are next taken to the vicinity of the Kepler-444 planetary system, located some 117 light years away. Kepler-444, the parent star, was formed 11.2 billion years ago when the Universe was less than 20% its current age. This pale yellow-orange star is 25% smaller than the Sun and substantially cooler.

In the animation we see its five planets transiting in front of the stellar disc. Having sizes between those of Mercury and Venus, they cause a tiny dimming of the light received from the star during transit. The last segment of the animation emphasizes the compactness of this system. The five planets orbit their parent star in less than 10 days or, equivalently, at less than one-tenth Earth's distance from the Sun. In a way, this system may be thought of as a miniature version of the inner planets in our own Solar System.

Dr Tiago Campante, from the University of Birmingham's School of Physics and Astronomy, who led the research, said: 'There are far-reaching implications for this discovery. We now know that Earth-sized planets have formed throughout most of the Universe's 13.8 billion year history, which could provide scope for the existence of ancient life in the Galaxy.

'By the time the Earth formed, the planets in this system were already older than our planet is today. This discovery may now help to pinpoint the beginning of what we might call the "era of planet formation".'

Professor Bill Chaplin, from the University of Birmingham's School of Physics and Astronomy, who has been leading the team studying solar-type stars using asteroseismology for the Kepler Mission, said: 'The first discoveries of exoplanets around other Sun-like stars in our Galaxy have fuelled efforts to find other worlds like Earth and other terrestrial planets outside our Solar System.

'We are now getting first glimpses of the variety of Galactic environments conducive to the formation of these small worlds. As a result, the path towards a more complete understanding of early planet formation in the Galaxy is now unfolding before us.'

Contacts and sources:
Faye Jackson
University of Birmingham
on January 28, 2015