Satellite images have revealed that a remote Arctic ice cap has thinned by more than 50 metres since 2012 – about one sixth of its original thickness – and that it is now flowing 25 times faster.

The image shows the rate of ice cap elevation change between 2010 and 2014 observed by the CryoSat satellite, which is overlaid onto an image acquired by the Sentinel-1A satellite. Red regions show where the ice surface has lowered due to ice loss. 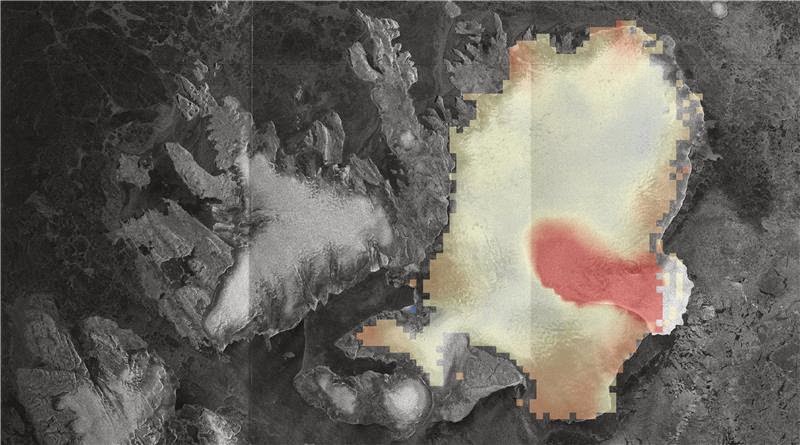 A team led by scientists from the Centre for Polar Observation and Modelling (CPOM) at the University of Leeds combined observations from eight satellite missions, including Sentinel-1A and CryoSat, with results from regional climate models, to unravel the story of ice decline.

The findings show that over the last two decades, ice loss from the south-east region of Austfonna, located in the Svalbard archipelago, has increased significantly. In this time, ice flow has accelerated to speeds of several kilometres per year, and ice thinning has spread more than 50km inland – to within 10km of the summit.

“These results provide a clear example of just how quickly ice caps can evolve, and highlight the challenges associated with making projections of their future contribution to sea level rise,” said the study’s lead author Dr Mal McMillan, a member of the CPOM team from the University of Leeds.

The study, published in Geophysical Research Letters and reported online today by the European Space Agency (ESA), is the first to make use of measurements from ESA’s latest Earth observation satellite, Sentinel-1A.

Sentinel-1A, the first satellite developed for Europe’s Copernicus programme, was launched in April last year, while CryoSat has been in orbit since 2010.

Dr McMillan said: “New satellites, such as the Sentinel-1A and CryoSat missions, are essential for enabling us to systematically monitor ice caps and ice sheets, and to better understand these remote polar environments.”

Melting ice caps and glaciers are responsible for about a third of recent global sea level rise. Although scientists predict that they will continue to lose ice in the future, determining the exact amount is difficult, due both to a lack of observations and the complex nature of their interaction with the surrounding climate.

“Glacier surges, similar to what we have observed, are a well-known phenomenon,” said Professor Andrew Shepherd from the University of Leeds, the Director of CPOM.

“However, what we see here is unusual because it has developed over such a long period of time, and appears to have started when ice began to thin and accelerate at the coast.”

There is evidence that the surrounding ocean temperature has increased in recent years, which may have been the original trigger for the ice cap thinning.

“Whether or not the warmer ocean water and ice cap behaviour are directly linked remains an unanswered question. Feeding the results into existing ice flow models may help us to shed light on the cause, and also improve predictions of global ice loss and sea level rise in the future,” said Professor Shepherd.

Long-term observations by satellites are the key to monitoring such climate-related phenomena in the years and decades to come.

Contacts and sources:
University of Leeds