The discovery of a 55,000-year-old partial skull in Northern Israel provides new insights into the migration of modern humans out of Africa. The rare find is reported in the journal Naturethis week by an international team of Israeli, North American and European researchers.

A key event in human evolution was the expansion of modern humans of African origin across Eurasia, replacing all other forms of hominin (humans and their predecessors), around 40,000-60,000 years ago. However, due to the scarcity of human fossils from this period, these ancestors of all present-day non-African modern populations have largely remained a mystery.

This is the interior of the Manot Cave in Israel's Galilee, where a 55,000-year-old skull sheds new light on modern human migration patterns. 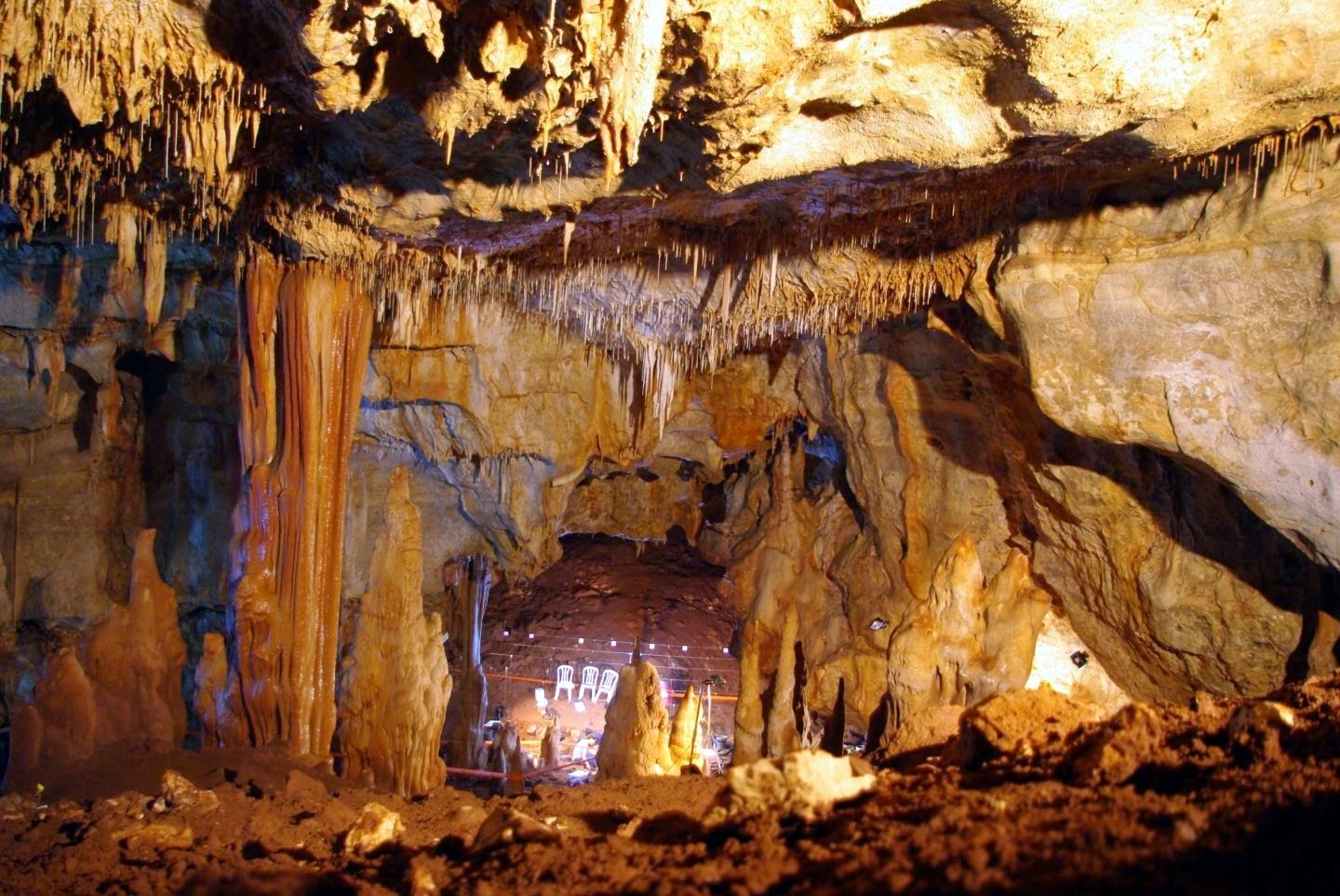 Now, researchers describe a partial skull that dates to around 55,000, which was found at Manot Cave in Israel's Western Galilee. The Manot Cave was discovered in 2008 during construction activities that damaged its roof. Rock falls and active stalagmites had apparently blocked the initial entrance to the cave for at least 15,000 years. The Hebrew University of Jerusalem's Cave Research Center conducted an initial survey of the cave and reported the findings of archaeological remains.

Prof. Israel Hershkovitz of Tel Aviv University led the anthropological study of the skull, and led the excavation together with archaeologists Dr. Ofer Marder of Ben-Gurion University, and Dr. Omry Barzilai of the Israel Antiquities Authority.

This image shows inside the Manot Cave in Israel's Galilee, where a 55,000-year-old skull sheds new light on modern human migration patterns. 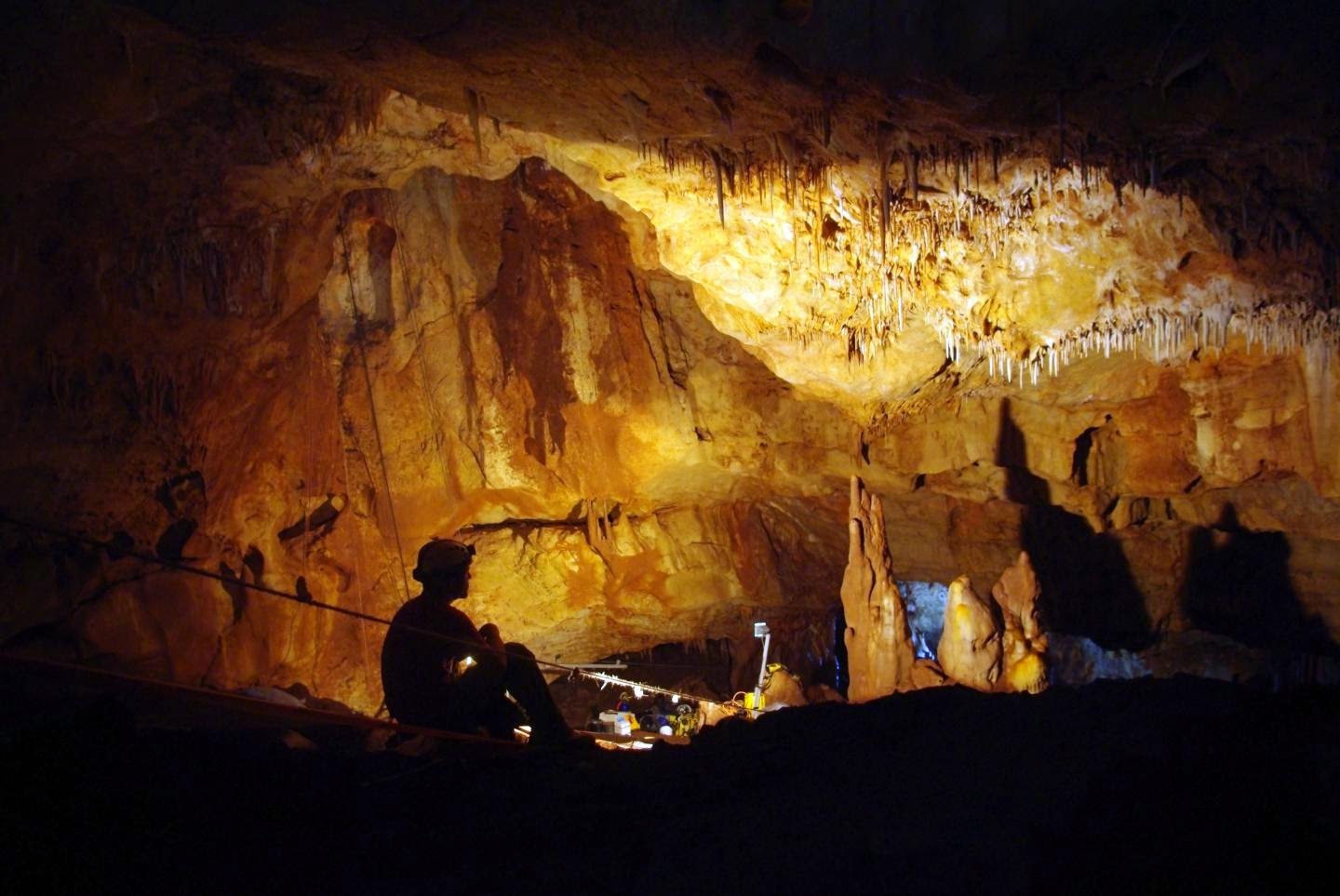 The skull has a distinctive "bun"-shaped occipital region at the back. In this way its shape resembles modern African and European skulls, but differs from other anatomically modern humans from the Levant. This suggests that the Manot people could be closely related to the first modern humans that later colonized Europe.

This finding represents the first fossil evidence from the critical period when genetic and archaeological models predict that African modern humans successfully migrated out of Africa and colonized Eurasia. It also represents the first fossil evidence that during the late Middle Paleolithic, the Levant was occupied not only by Neanderthals but also by modern humans.

The researchers suggest that the population from which this skull is derived had recently migrated out of Africa and established itself in the Levantine corridor during a time span that was favorable for human migration, due to warmer and wetter climatic events over the Northern Sahara and the Mediterranean.

The excavation at Manot Cave was initiated and supported throughout the years by the late Mr. Dan David, founder of the "Dan David Prize", and his son Mr. Ariel David. The ongoing research is financially supported by the Dan David Foundation, the Israel Antiquities Authority (IAA), Case Western Reserve University (CWRU), the Leakey Foundation, the Irene Levi Sala CARE Archaeological Foundation, the Keren Kayemet L'Israel (JNF) and the Israel Science Foundation (ISF). Radiocarbon dating research has been supported by the National Science Foundation (NSF), the Exilarch's Foundation and the MPS-WI Center for Integrative Archaeology and Anthropology.
on January 29, 2015