Uranium isotopes leave a distinct ‘fingerprint’ in the sources of volcanic rocks, making it possible to gauge their age and origin. Geologists have gained a new understanding of how the Earth’s crust is recycled back into its interior based on these uranium isotopes.

From the beginning of time, uranium has been part of the Earth and, thanks to its long-lived radioactivity, it has proven ideal to date geological processes and deduce Earth’s evolution. Natural uranium consists of two long-lived isotopes uranium-238 and the lighter uranium-235. A new study of the global cycle of these uranium isotopes brings additional perspectives to the debate on how the Earth has changed over billions of years as revealed in a recently published study in the journal Nature.

A numerical simulation shows how Earth's crust (blue) is subducted and transported into the mantle (orange). 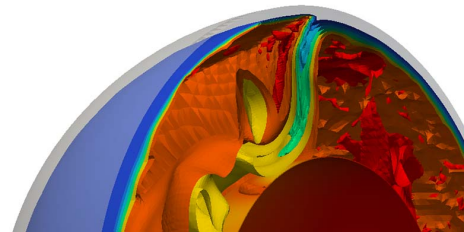 From early Earth history, the continental crust (the Earth’s thick solid outer skin that we live on) has accumulated mass from the underlying hot mantle. Most of the newly formed crust, however, is lost again. At mid-ocean ridges at the bottom ocean, where plates drift apart, new oceanic crust is constantly produced as basaltic rocks when hot volcanic lava emerges from the mantle and solidifies. The oceanic crust moves away from the mid-ocean-ridges and ultimately gets transported back into the underlying mantle through “subduction” at ocean trenches.

Uranium is enriched in the rocks of the continental crust; however, at Earth’s surface, different environments over time have influenced its mobility. In an oxygen-free atmosphere, as prevailed on early Earth, uranium stayed immobile in rocks as tetravalent uranium (IV). Only after atmospheric oxygen was formed did uranium become oxidised to its mobile hexavalent uranium (VI). This more mobile uranium may then be released during the weathering and break-down of rocks and transported to the oceans in aqueous form. As the cooling oceanic crust moves away from the mid-ocean-ridges in the oceans, seawater eventually percolates through cracks in its rock and in the process uranium gets incorporated into the oceanic crust, in a similar way that a sponge takes up water.

“The radioactive nature of uranium isotopes has long been key in reconstructing early Earth history, but we now see that they also have another story to tell” explains Morten Andersen, a geochemist in the Department of Earth Sciences at ETH Zurich.

For this work, conducted at the University of Bristol including Morten Andersen (now Earth Science, ETH Zurich) along with researchers from the Durham (UK), Wyoming and Rhode Island (US), used the ‘fingerprint’ carried in the ratio of the two uranium isotopes.

In order to examine the uranium cycle (and the rock cycle), the researchers analysed mid-ocean ridge basalts (MORBs), the hot volcanic lava that is produced from the upper and well-mixed part of the mantle. The ratio of the uranium isotopes in MORBs can be compared with those found in ocean island basalts in places such as Hawaii and the Canary Islands. These islands are so-called “hot-spots” with lava formed from hot mantle plumes that up-well beneath the oceanic crust. Compared to the MORB mantle, the island basalts are made up of material transported to the surface from a much deeper, less well-mixed, mantle sources.

Heavy uranium from surface to the deep

The isotope ratios for uranium-238 to uranium-235 are significantly greater for MORBs than for ocean island basalts. The ratios are also higher than that found in meteorites. This suggests that the MORBs contain a “fingerprint” of the uranium from the oceanic crust, drawn down from the surface and into the upper part of the Earth’s mantle through subduction, according to Andersen.

Through convection – slow movements of material in the upper mantle – the material was eventually mixed around and carried to the area of the mid-ocean ridges and transported back to the surface in the lavas that make up MORBs.

In contrast, the island basalts’ ratios of uranium-238 to uranium-235 correspond to those of the meteorites used in the study and showed that these rocks could not have the same mantle source as the MORBs. The researchers explain that ocean island lavas comes from a deeper, less mixed, mantle source and therefore any uranium added from the surface originates from a much earlier time in Earth’s history, when the surface environment was very different from today.

Study co-author Heye Freymuth of the University of Bristol explains: “Although uranium was incorporated into the oceanic crust since the initial rise in atmospheric oxygen about 2.4 billion years ago, the ocean crust did not incorporate higher amounts of uranium-238 as the oceans did not yet have adequate supplies of oxygen.”

“An important result of this study is how changing conditions on the Earth’s surface and the increase of oxygen in the atmosphere influenced the composition of deep Earth. Our results suggest that due to changes over the past 600 million years, uranium was mobilised from the surface, transported into the Earth’s interior and distributed within the mantle,” says Andersen.

The study of uranium and the crust’s cycle brings new perspectives to the debate about how the face of the Earth has changed over billions of years. “This is currently one of the hottest research topics for Earth scientists,” Andersen points out. Particularly lively debates take place on how the concentration of oxygen in the atmosphere evolved; after all, it is associated with many other geological weathering processes, including the fate of uranium. The current study is mainly fundamental research in a relatively young research area.

The identified uranium isotope signatures could in future be used commercially to detect unknown uranium deposits and help understand processes of uranium mobility. The first basic scientific work pointing to the potential of uranium-238 to uranium-235 variation on Earth was published in 2007. The study by Andersen and his colleagues is the first to use the uranium isotope ratio for the examination of igneous rock and apply it to the recycling process in deep Earth.