A Rare Glimpse At The Elusive Saharan Cheetah

Research by scientists and conservationists from the Wildlife Conservation Society, the Zoological Society of London, and other groups published this week in PLOS ONE shows that critically endangered Saharan cheetahs exist at incredibly low densities and require vast areas for their conservation. The research also offers some of the world's only photographs of this elusive big cat

Research by scientists and conservationists from the Wildlife Conservation Society, the Zoological Society of London, and other groups published today in PLOS ONE shows that critically endangered Saharan cheetahs exist at incredibly low densities and require vast areas for their conservation. The research also offers some of the world's only photographs of this elusive big cat. 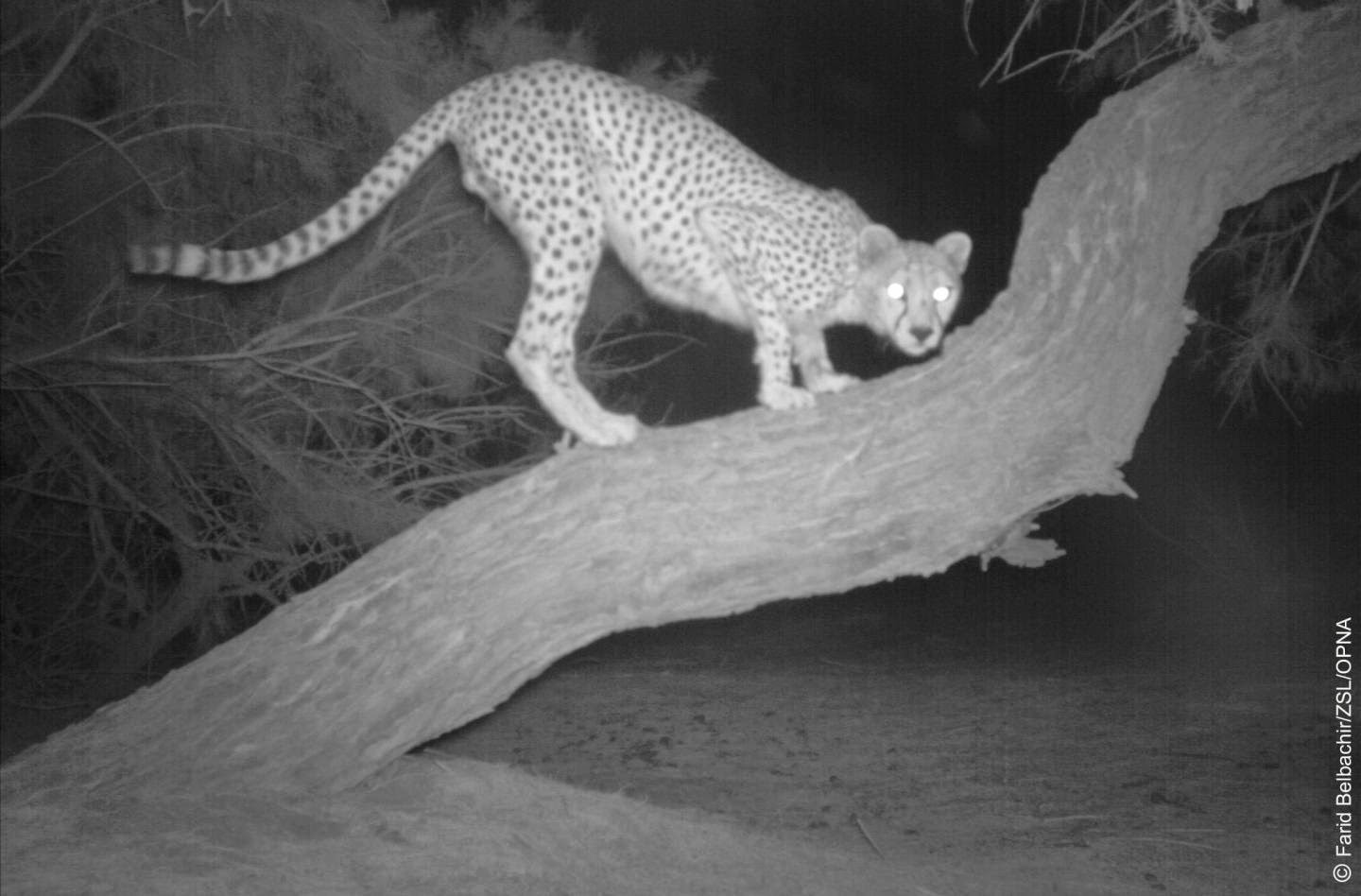 The findings are a result of the monitoring of Saharan cheetahs, a critically endangered cheetah subspecies, in Ahaggar Cultural Park, Algeria. Remote infra-red camera traps were used and the photographs gathered have provided the world's scientific community with some of the only close-up photographs ever taken of the Saharan cheetah. There are thought to be fewer than 250 of these animals left in the Sahara, making them one of the rarest carnivores on the planet.

The findings by scientists and conservationists at WCS, ZSL, University College London, UK, and Université de Béjaïa, Algeria, in collaboration with the Office National du Parc Culturel de l'Ahaggar, show that the Saharan cheetah adapts its behavior to cope with the harsh desert environment in which it lives. They are active at night, probably to avoid heat or contact with humans, and must cover a vast amount of ground to find prey.

Research into how cheetahs survive within extreme desert conditions gives scientists a better understanding of how best to approach their conservation. The survival of large carnivores within the Sahara desert indicates that at present the Ahaggar Cultural Park is still a relatively healthy habitat; however there are threats to cheetah and their prey. Authors argue that more needs to be done to secure this habitat's long-term survival.

Farid Belbachir, lead-author from Laboratoire d'Ecologie et Environnement, Université de Béjaïa, Algeria, said: "This is the first time we have been able to collect scientific data on the rare Saharan cheetah, as in the past we have had to rely on anecdotes and guesswork. We hope that this important carnivore does not follow the path to extinction like other Algerian desert species such as the addax antelope and dama gazelle."

Dr Sarah Durant, co-author from WCS and ZSL, added: "This research provides us with important new insights into the world of this remarkable desert-dwelling large cat. I hope that it not only provides invaluable scientific information about the ecology of the Saharan cheetah for the first time but also reminds the world of the value of studying and protecting desert species and their environments, which are often overlooked by researchers and conservation programs."

Confined to desert environments, the Saharan cheetah lives in pockets of north and west Africa. The report shows that Saharan cheetahs are more nocturnal, more wide-ranging and occur at lower densities than other cheetahs living in Africa.