A First Peek Beneath The Surface Of A Comet

In some of the first research findings to be published from the European Space Agency's Rosetta Mission to the comet 67P/Churyumov-Gerasimenko, scientists including astronomer Peter Schloerb of the University of Massachusetts Amherst report early measurements of the comet's subsurface temperature and production of gas from the surface of its nucleus.

Writing this week in Science, an international team with lead author Samuel Gulkis of the Jet Propulsion Laboratory, Pasadena, describes the first millimeter-wave measurements made from June through September 2014, of the comet's nucleus, subsurface temperature and of water vapor and other molecules in the coma of gas and dust that is beginning to form around the comet as it approaches the Sun.

Writing this week in Science, an international team describes the first millimeter-wave measurements made from June through September 2014, of the comet's nucleus and of water vapor and other molecules in the coma of gas and dust that is beginning to form around the comet as it approaches the Sun. 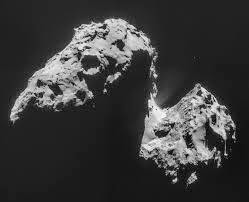 The researchers used NASA's Microwave Instrument on the Rosetta Orbiter (MIRO), launched as a part of the European Space Agency's Rosetta Mission, to study heat transport in the comet's nucleus along with outgassing and development of the coma as interrelated processes. Data from MIRO's millimeter-wave radio receivers help to map temperature and spectral information during the day, night and across seasons as the comet approached the sun.

Schloerb, a planetary scientist who brings special expertise in radio astronomy and remote sensing to the team, says such measurements and monitoring of the interplay between gas emissions and surface temperature over time by MIRO provides key information that allows scientists to better understand the evolution of the gas and dust that comprise the comet's coma.

Observations of the comet at millimeter wavelengths allow astronomers to measure the temperature beneath the surface of the comet's nucleus and properties of the gases in the coma as well.

"An important contribution is that we're sensing not only the subsurface, we're also looking at the important properties of gases inside the coma. Our instrument puts the two together, providing an integrated look at the important physical processes that make the comet work," the UMass Amherst astronomer says.

Schloerb adds, "That's valuable because we can measure temperature within the surface and then see the gases that are produced directly as the nucleus heats up. The surface and subsurface temperatures vary quite a lot as the comet rotates and changes its orientation towards the sun during its orbit. It will be fun to relate this driving force behind the gaseous emissions and then see how the molecules produced behave in response as the comet moves toward the sun."

"In our initial results, not surprisingly, we found important day-night and seasonal variations in the temperature of the nucleus. It is northern summer now, so the northern latitudes are quite warm, while some southern latitudes are un-illuminated at this time and very cold. We're the only instrument that can make measurements of this un-illuminated part of the comet, so our measurements are completely unique in that area."

Schloerb says the team's observations from Comet P67 show a comet spectrum was not consistent with water vapor coming out the same in all directions. Instead, water vapor flowed out mainly from the illuminated side.

"Right away, by looking at the shape of the spectrum, we knew the emissions were very asymmetrical, with most gas being produced on the dayside where comet was being heated up. This is not a new result, we've known this in a general way for 30 years from ground based observations, but it was sure interesting to see it up close where we can look at the detailed behavior."

Another of the important properties of gases inside the coma, besides composition, is their speed as they escape, Schloerb says. MIRO has the ability to measure the outflow speed of the gasses, which is fundamental to the interpretation of observations of the coma and a key parameter needed to check theoretical models.

The UMass Amherst astronomer, who has studied comets for decades and led the worldwide radio observations of Halley's comet as a part of the International Halley Watch in the 1980s, says, "This has been a pretty neat experience. I've never been on a spacecraft project before, but as a planetary scientist I always wanted to do this. After all those years of sitting and looking through a telescope, to see the spectra come in and make the first maps ever of the comet nucleus is really satisfying."

A component of one of the receivers was built at UMass Amherst by Neal Erickson, a world expert on millimeter and submillimeter receivers.

Contacts and sources:
University of Massachusetts Amherst
on January 26, 2015