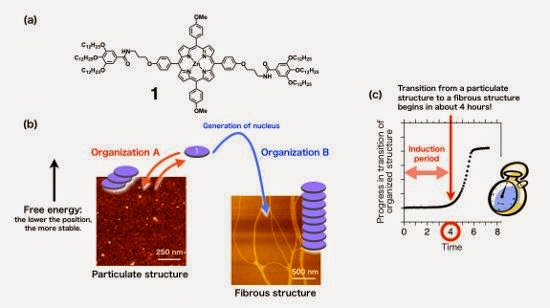 The results of this research will be published in the German Chemical Society’s journal “Angewandte Chemie International Edition” in the near future.

Molecular self-organization is widely observed in nature, and is a critical phenomenon in terms of developing systems that perform complex functions as seen in such natural mechanisms as photosynthesis and neurocircuits. Attempts have been made to develop new materials capable of executing advanced functions using the principle behind the phenomenon of molecular self-organization.

Controlling such timing is similar to the mechanism behind the biological clock in organisms from the viewpoint that in both cases, such time-controlling process is carried out by a network of molecules consisting of several chemical species.

Self-organization is a vital concept in diverse fields such as materials science, nanotechnology and biotechnology, and is attracting much attention as a new method of synthesizing materials. By applying the method we developed in this research, we intend to develop advanced systems that are capable of emitting light or changing electrical conductivity at desirable timings. In the future, we hope to develop smart materials that autonomously function corresponding to the passing of time, like biomolecular systems do.

This research was funded by the Japan Society for the Promotion of Science’s grant-in-aid for scientific research on innovative areas, “dynamical ordering of biomolecular systems for creation of integrated functions” (Koichi Kato, Project Leader, National Institutes of Natural Sciences), and “π-system figuration” (Takanori Fukushima, Project Leader, Tokyo Institute of Technology).