"Weird Little Corner" Of The Already Weird World Of Neutrinos

In what they call a "weird little corner" of the already weird world of neutrinos, physicists have found evidence that these tiny particles might be involved in a surprising reaction.

Neutrinos are famous for almost never interacting. As an example, ten trillion neutrinos pass through your hand every second, and fewer than one actually interacts with any of the atoms that make up your hand. However, when neutrinos do interact with another particle, it happens at very close distances and involves a high-momentum transfer.

This MINERvA event display shows a coherent pion production candidate interaction. The neutrino enters the detector from the left and interacts with a nucleus, producing a muon and a pion. The colors indicate the amount of energy deposited at that point. 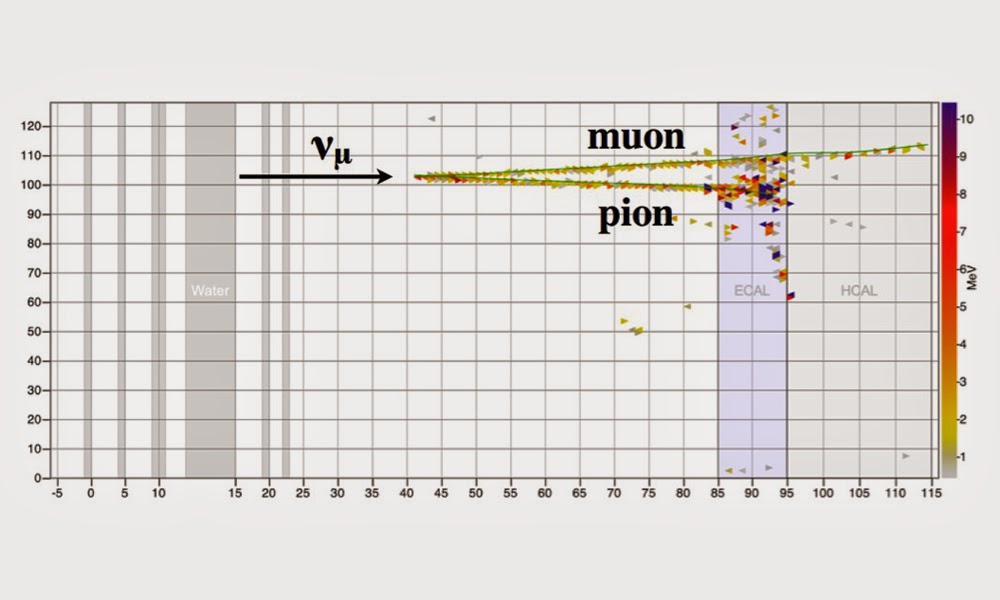 And yet a new paper, published in Physical Review Letters this week, shows that neutrinos sometimes can also interact with a nucleus but leave it basically untouched - inflicting no more than a "glancing blow" - resulting in a particle being created out of a vacuum.

Professor Kevin McFarland is a scientific co-spokesperson with the international MINERvA collaboration, which carries out neutrino scattering experiments at Fermilab McFarland, who also heads up the Rochester team that was primarily responsible for the analysis of the results, compares neutrino interactions to the firing of a bullet at a bubble, only to find the bubble was left intact.

"The bubble - a carbon nucleus in the experiment - deflects the neutrino 'bullet' by creating a particle from the vacuum," McFarland explains. "This effectively shields the bubble from getting blasted apart and instead the bullet only delivers a gentle bump to the bubble."

Producing an entirely new particle - in this case a charged pion - requires much more energy than it would take to blast the nucleus apart - which is why the physicists are always surprised that the reaction happens as often as it does. McFarland adds that even painstakingly detailed theoretical calculations for this reaction "have been all over the map."

"The production of pions from this reaction had not been observed consistently in other experiments," McFarland said. By using a new technique, they were able to measure how much momentum and energy were transferred to the carbon nucleus - showing that it remained undisturbed - and the distribution of the pions that were created.

"After analyzing the results, we now have overwhelming evidence for the process," McFarland says.

The two members of the collaboration who were primarily responsible for analyzing the results were Aaron Higuera, at the time a postdoc at Rochester and now at the University of Houston, and Aaron Mislivec, one of McFarland's Ph.D. students.

Working with Higuera, Mislivec wrote the computer code that allowed them to sift through the results and get a picture of the reaction. "Our detector gave us access to the full information of exactly what was happening in this reaction," Mislivec explains. "Our data was consistent with the unique fingerprint of this reaction and determined how these interactions happen and how often." The key to identifying the reaction was finding undisturbed carbon nuclei and then studying the two resulting particles - the pion, which is responsible for shielding the nucleus, and the muon.

Understanding this reaction, McFarland states, "is not going to make a better mousetrap, but it is exciting to learn that this weird reaction really does take place."

Researchers in the MINERvA collaboration measure low energy neutrino interactions both to support neutrino oscillation experiments and study the strong dynamics of the nucleon and nucleus that affect the interactions.

The work is funded by the Department of Energy, the National Science Foundation, and partnering scientific agencies in Brazil, Chile, Mexico, Switzerland, Peru and Russia.


Contacts and sources:
Leonor Sierra and Peter Iglinski
University of Rochester
on December 31, 2014