The Origin Of Theta Auroras Found

Auroras are the most visible manifestation of the sun's effect on Earth, but many aspects of these spectacular displays are still poorly understood. Thanks to the joint European Space Agency and NASA's Cluster mission combined with data from a past NASA mission called the Imager for Magnetopause-to-Aurora Global Exploration, or IMAGE, a particular type of very high-latitude aurora has now been explained.

The ESA/NASA Cluster and NASA's IMAGE missions were in a position around Earth on Sep. 15, 2005, to determine how solar material in the magnetic environment in near-Earth space creates a special kind of high-latitude aurora called a theta aurora. 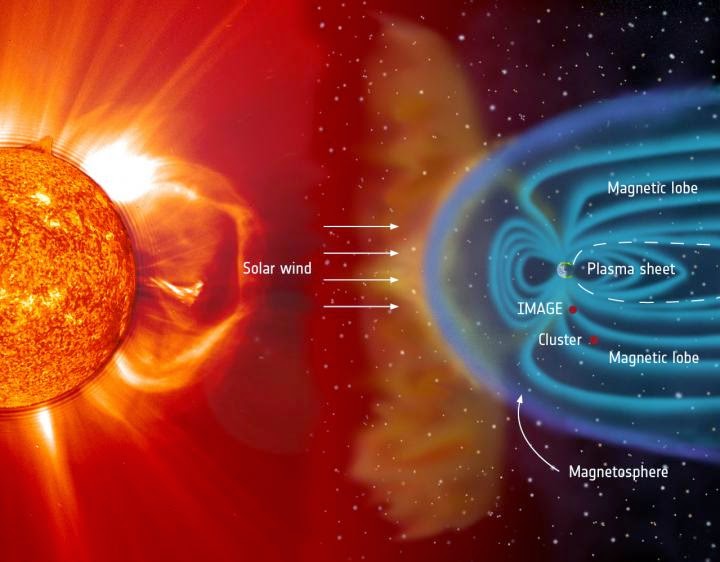 Known as a theta aurora -- because seen from above it looks like the Greek letter theta, an oval with a line crossing through the center -- this type of aurora sometimes occurs closer to the poles than normal aurora. While the genesis of the auroral oval emissions is reasonably well understood, the origin of the theta aurora was unclear until now. A paper in the Dec. 19, 2014, issue of Science shows that hot plasma funneled into near-Earth space from the sun helps cause these unique aurora.

"The possibilities have been debated since the first satellite observations of the phenomenon were made in the 1980s," said Robert Fear of the University of Southampton in the U.K. (formerly at the University of Leicester), and lead author of the Science paper.

Although separated by some 93 million miles, the sun and Earth are connected by what's known as the solar wind. This plasma - electrically charged atomic particles - streams from the sun and travels across the solar system, carrying its own magnetic field along for the ride.

The realignment opens the door so that solar wind material can funnel into the magnetosphere - the giant magnetic bubble surrounding Earth. This is what leads to the aurora, which is produced when the particles funnel down along Earth's magnetic field lines and strike atoms high in the atmosphere. The interaction with oxygen atoms results in a green or, more rarely, red glow in the night sky, while nitrogen atoms yield blue and purple colors. Normally, the main region for this impressive display is the auroral oval, which lies at around 65-70 degrees north or south of the equator, encircling the polar caps.

But when the interplanetary magnetic field points northward, auroras can occur at even higher latitudes, sometimes resulting in theta aurora. Prior to the recent work, scientists suspected that theta aurora had something to do with the particles observed in the lobe regions of the magnetosphere. The plasma in the lobes is normally cold, but previous observations suggested that theta auroras are linked with unusually hot lobe plasma - but just how was unclear.

"It was unclear whether this hot plasma was a result of direct solar wind entry through the lobes of the magnetosphere," said Fear. "Or if the plasma is somehow related to the plasma sheet on the night side of Earth. One idea is that the process of magnetic reconnection on the night side of Earth causes a build-up of trapped, hot plasma in the higher latitude lobes."

The mystery was finally solved by studying data collected simultaneously by the Cluster and IMAGE spacecraft on Sept. 15, 2005. While the four Cluster satellites were located in the southern hemisphere magnetic lobe, IMAGE had a wide-field view of the southern hemisphere aurora. As one Cluster satellite observed uncharacteristically energetic plasma in the lobe, IMAGE saw the arc of the theta aurora cross the magnetic footprint of Cluster.

The team found that the energetic plasma appeared on high-latitude magnetic field lines that had been closed by the process of magnetic reconnection driven by the northward pointed fields. This in turn caused the plasma to become relatively hot. Such observations support the idea that theta aurora are due to plasma trapped inside the magnetosphere, rather than material being directly pushed in from the solar wind.

"Solving the question of the origin of the theta aurora required Cluster's high inclination orbit that sweeps over the region where the aurora are generated together with the imaging capability of IMAGE, which is no longer functioning," said Melvyn Goldstein, Cluster project scientist at NASA's Goddard Space Flight Center in Greenbelt, Maryland. "Hopefully, future missions will give comparable capabilities to view the polar regions of the magnetosphere."