The Hot Blue Stars Of Messier 47

Messier 47 is located approximately 1600 light-years from Earth, in the constellation of Puppis (the poop deck of the mythological ship Argo). It was first noticed some time before 1654 by Italian astronomer Giovanni Battista Hodierna and was later independently discovered by Charles Messier himself, who apparently had no knowledge of Hodierna's earlier observation.

This spectacular image of the star cluster Messier 47 was taken using the Wide Field Imager camera, installed on the MPG/ESO 2.2-meter telescope at ESO's La Silla Observatory in Chile. This young open cluster is dominated by a sprinkling of brilliant blue stars but also contains a few contrasting red giant stars. 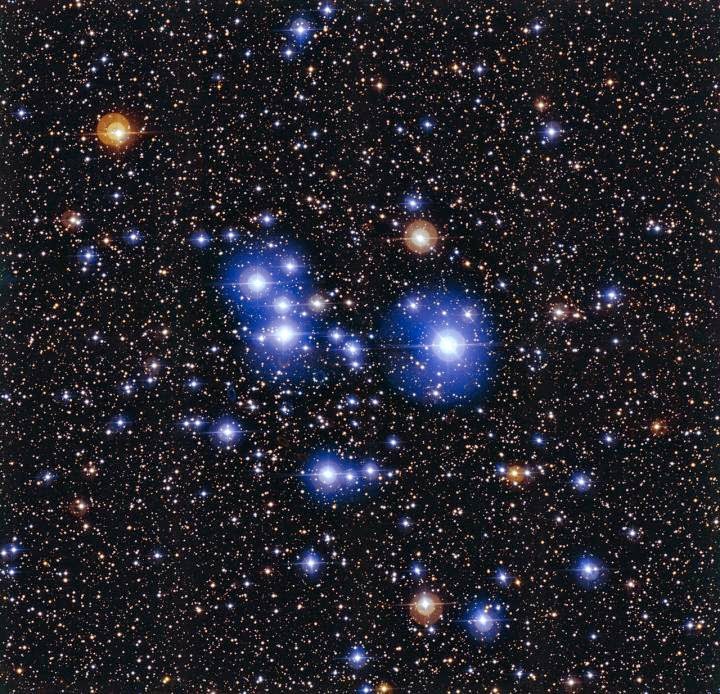 Although it is bright and easy to see, Messier 47 is one of the least densely populated open clusters. Only around 50 stars are visible in a region about 12 light-years across, compared to other similar objects which can contain thousands of stars.

Messier 47 has not always been so easy to identify. In fact, for years it was considered missing, as Messier had recorded the coordinates incorrectly. The cluster was later rediscovered and given another catalogue designation -- NGC 2422. The nature of Messier's mistake, and the firm conclusion that Messier 47 and NGC 2422 are indeed the same object, was only established in 1959 by Canadian astronomer T. F. Morris.

The bright blue-white colours of these stars are an indication of their temperature, with hotter stars appearing bluer and cooler stars appearing redder. This relationship between colour, brightness and temperature can be visualised by use of the Planck curve. But the more detailed study of the colours of stars using spectroscopy also tells astronomers a lot more -- including how fast the stars are spinning and their chemical compositions. There are also a few bright red stars in the picture -- these are red giant stars that are further through their short life cycles than the less massive and longer-lived blue stars [1].

By chance Messier 47 appears close in the sky to another contrasting star cluster -- Messier 46. Messier 47 is relatively close, at around 1600 light-years, but Messier 46 is located around 5500 light-years away and contains a lot more stars, with at least 500 stars present. Despite containing more stars, it appears significantly fainter due to its greater distance.

Messier 46 could be considered to be the older sister of Messier 47, with the former being approximately 300 million years old compared to the latter's 78 million years. Consequently, many of the most massive and brilliant of the stars in Messier 46 have already run through their short lives and are no longer visible, so most stars within this older cluster appear redder and cooler.