Planets orbiting close to low-mass stars — easily the most common stars in the universe — are prime targets in the search for extraterrestrial life.

But new research led by an astronomy graduate student at the University of Washington indicates some such planets may have long since lost their chance at hosting life because of intense heat during their formative years.

Illustration of a low-mass, M dwarf star, seen from an orbiting rocky planet. 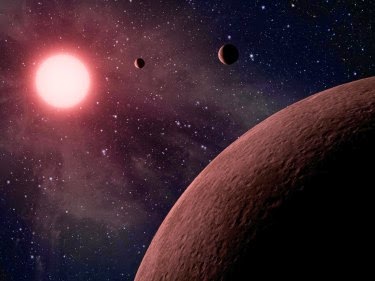 Low-mass stars, also called M dwarfs, are smaller than the sun, and also much less luminous, so their habitable zone tends to be fairly close in. The habitable zone is that swath of space that is just right to allow liquid water on an orbiting planet’s surface, thus giving life a chance.

Planets close to their host stars are easier for astronomers to find than their siblings farther out. Astronomers discover and measure these worlds by studying the slight reduction in light when they transit, or pass in front of their host star; or by measuring the star’s slight “wobble” in response to the planet’s gravity, called the radial velocity method.

But in a paper  published in the journal Astrobiology, doctoral student Rodrigo Lugerand co-author Rory Barnes, a UW research assistant professor, find through computer simulations that some planets close to low-mass stars likely had their water and atmospheres burned away when they were still forming.

“All stars form in the collapse of a giant cloud of interstellar gas, which releases energy in the form of light as it shrinks,” Luger said. “But because of their lower masses, and therefore lower gravities, M dwarfs take longer to fully collapse — on the order of many hundreds of millions of years.”

“Planets around these stars can form within 10 million years, so they are around when the stars are still extremely bright. And that’s not good for habitability, since these planets are going to initially be very hot, with surface temperatures in excess of a thousand degrees. When this happens, your oceans boil and your entire atmosphere becomes steam.”

Also boding ill for the atmospheres of these worlds is the fact that M dwarf stars emit a lot of X-ray and ultraviolet light, which heats the upper atmosphere to thousands of degrees and causes gas to expand so quickly it leaves the planet and is lost to space, Luger said.

“So, many of the planets in the habitable zones of M dwarfs could have been dried up by this process early on, severely decreasing their chance of actually being habitable.”

A side effect of this process, Luger and Barnes write, is that ultraviolet radiation can split up water into its component hydrogen and oxygen atoms. The lighter hydrogen escapes the atmosphere more easily, leaving the heavier oxygen atoms behind. While some oxygen is clearly good for life, as on Earth, too much oxygen can be a negative factor for the origin of life.

“Rodrigo has shown that this prolonged runaway greenhouse phase can produce huge atmospheres full of oxygen — like, 10 times denser than that of Venus and all oxygen,” said Barnes. “Searches for life often rely on oxygen as a tracer of extraterrestrial life — so the abiological production of such huge quantities of oxygen could confound our search for life on exoplanets.”

Luger said the working title of their paper was “Mirage Earths.”

“Because of the oxygen they build up, they could look a lot like Earth from afar — but if you look more closely you’ll find that they’re really a mirage; there’s just no water there.”

The research was funded by NASA’s Astrobiology Institute, through the Virtual Planetary Laboratory, headquartered at the UW.

University of Washington
on December 05, 2014