Looking Forward To The 24th Century: Cardiac Arrest Remains A Deadly Problem - But For Different Reasons From Today

The Star Trek universe is one of the most popular pieces of science fiction entertainment. Lots of the technologies seen in the TV and cinema episodes featuring Captain Kirk, Mr Spock or Captain Picard were once regarded as futuristic, but have now become reality - with examples including wireless communication or portable computers. 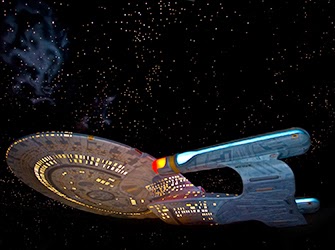 In a recent study by the University Department of Emergency Medicine at the MedUni Vienna, the make-believe future of the human race depicted in this series has been used to investigate the frequency and mortality of cardiac arrests in the 24th century.

Right from the start, the scientists were involved in the production of the Star Trek series. The famous researcher Stephen Hawking, a self-confessed Star Trek fan, once wrote in a preface that the series "expands the human imagination". Many of the technical devices that occur very early on in the series have become reality. Even in the pilot film in 1966, the crew was given a message on a sheet of paper that was emitted from a machine. In those days, the fax machine hadn't even been invented. It wasn't until 1979 that the first fax machines were connected to the telephone network.

Captain Kirk's "communicator" from 1966 can be regarded as the fore-runner to the modern-day mobile phone. Some manufacturers later declared that they had been inspired by Star Trek. The same goes for hands-free earpieces, flat screens, video phones or a type of laptop. All of these had been used in the Star Trek series long before they were used in the real world.

Scientists at the MedUni Vienna now used this vision of the future to take a look at emergency medicine in the make-believe 24th century. The result: even in the world of Star Trek, a cardiac arrest is associated with high mortality - albeit less due to general medical reasons than today. "The treatment of cardiac arrests is a very highly-researched field of modern medicine. Unfortunately, survival rates after an event such as this have continued to stagnate at a low level for many years," explains study leader David Hörburger. "The aim of the study was to analyse its epidemiology and treatment in the way it is fictitiously portrayed in the 24th century in the world of Star Trek in order to find inspiration for the present day."

A cardiac arrest is therefore associated with high mortality in the 24th century too (around 90 per cent). However, an analysis of how they are portrayed in the Star Trek series illustrates a significant shift in the cause from general medical to traumatological, i.e. death caused by severe physical injury, injury caused by "energy weapons" and poisoning, rather than by heart attacks or cardiac arrhythmias, which are the most common causes of present-day cardiac arrests. Says Hörburger: "This invites the conclusion that people in the future will be living much more healthily and will have better preventative medicine than we do now."

Another interesting result of this analytical glimpse of a make-believe future is that, today, people who suffer a cardiac arrest in hospital have the best chances of survival, followed by patients who have a cardiac arrest in the street. The poorest outlook is reserved for people who have a cardiac arrest at home. In the Star Trek future presented in this study, this situation is different - and can be explained by the technology of "teleportation", i.e. the lightning-fast transport of a human through the transfer of matter from one location to another. Hand-held medical scanners ("tricorders") were also used frequently in the programmes and helped to treat patients.