New research shows that modern human skeletons evolved into their lightly built form only relatively recently--after the start of the Holocene about 12,000 years ago and even more recently in some human populations.

This illustration shows that modern people (right) have unusually low density in bones throughout the skeleton, including the hand bone joints (metacarpal heads) shown here. This new study found that bone joint density remained high throughout human evolution spanning millions of years, until it decreased significantly in recent modern humans, probably as a result of an increasingly sedentary lifestyle. From left to right: modern chimpanzee, Australopithecus, Neanderthal, and modern human. 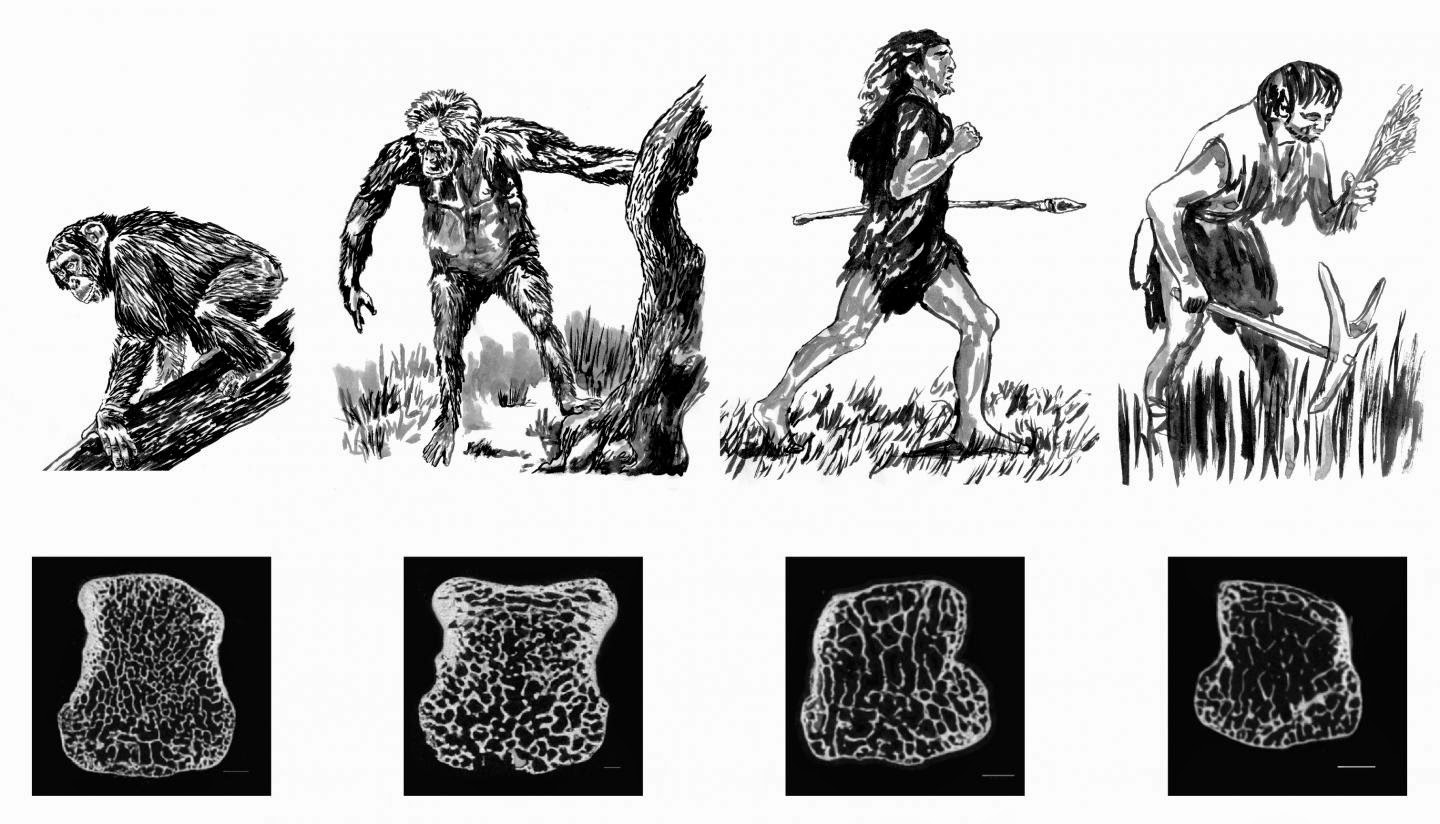 The work, based on high-resolution imaging of bone joints from modern humans and chimpanzees as well as from fossils of extinct human species shows that for millions of years extinct humans had high bone density until a dramatic decrease in recent modern humans.

Published this week in the Proceedings of the National Academy of Sciences, the findings reveal a higher decrease in the density of lower limbs than in that of the upper limbs, suggesting that the transformation may be linked to humans' shift from a foraging lifestyle to a sedentary agricultural one.

"Despite centuries of research on the human skeleton, this is the first study to show that human skeletons have substantially lower density in joints throughout the skeleton, even in ancient farmers who actively worked the land," said Brian Richmond, an author of the study, curator in the American Museum of Natural History's Division of Anthropology, and a research professor at George Washington University.

Compared to our closest living relatives--chimpanzees--as well as to our extinct human ancestors, humans are unique in having an enlarged body size and lower-limb joint surfaces in combination with a relatively lightweight skeleton. But until now, scientists did not know that human bone joints are significantly less dense compared with those of other animals, or when during human evolution this unique characteristic first appeared.

"Our study shows that modern humans have less bone density than seen in related species, and it doesn't matter if we look at bones from people who lived in an industrial society or agriculturalist populations that had a more active life. They both have much less bone density," said Habiba Chirchir, lead author of the paper and a postdoctoral researcher at the Smithsonian Institution's National Museum of Natural History, who started the work at George Washington University with Richmond. "What we want to know now is whether this is an early human characteristic that defines our species."

To explore this question, Chirchir, Richmond, and an international team of researchers used high-resolution computed tomography and microtomography to measure trabecular, or spongy, bone of the limb joints in modern humans and chimpanzees, as well as in fossil hominins attributed to Australopithecus africanus, Paranthropus robustus, Homo neanderthalensis, and early Homo sapiens.

Their results show that only recent modern humans have low trabecular density throughout limb joints, and that the decrease is especially pronounced in the lower joints--those in the hip, knee, and ankle--rather than the upper joints in the shoulder, elbow, and hand. The appearance of this anatomical change late in our evolutionary history may have been a result of the transition from a nomadic to a more settled lifestyle.

"Much to our surprise, throughout our deep past, we see that our human ancestors and relatives, who lived in natural settings, had very dense bone. And even early members of our species, going back 20,000 years or so, had bone that was about as dense as seen in other modern species," Richmond said. "But this density drastically drops off in more recent times, when we started to use agricultural tools to grow food and settle in one place."

This research provides an anthropological context to modern bone conditions like osteoporosis, a bone-weakening disorder that may be more prevalent in contemporary populations due partly to low levels of walking activity.

"Over the vast majority of human prehistory, our ancestors engaged in far more activity over longer distances than we do today," Richmond. "We cannot fully understand human health today without knowing how our bodies evolved to work in the past, so it is important to understand how our skeletons evolved within the context of those high levels of activity."