Mammals that lived during the time of the dinosaurs are often portrayed as innocuous, small-bodied creatures, scurrying under the feet of the huge reptiles. In reality, this wasn’t the case, and a new fossil from Madagascar further underscores this point, revealing fascinating perspectives on the growing diversity of Mesozoic mammals. 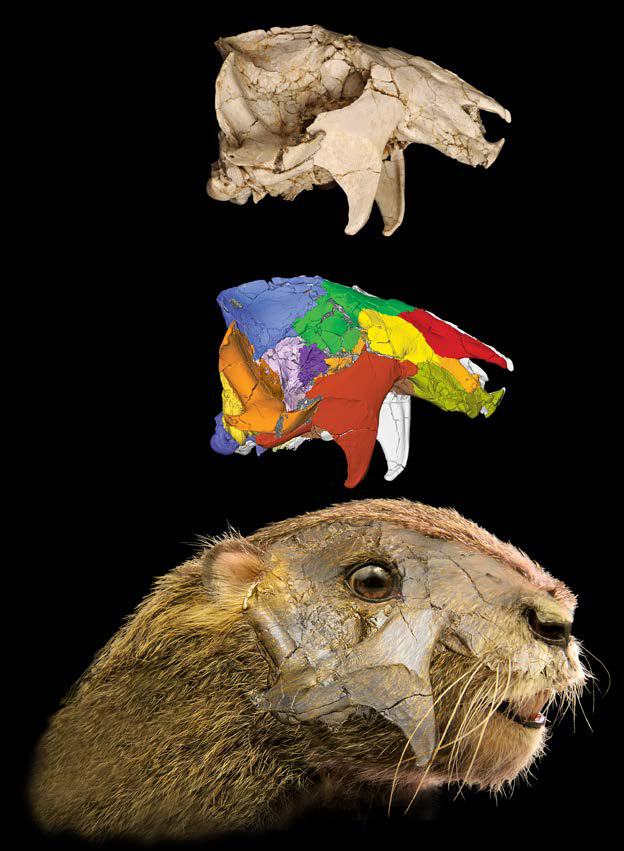 Vintana sertichi had previously been described in a preliminary note in November of this year, but a new memoir in the Journal of Vertebrate Paleontology delves far deeper into the morphology and paleoecology of this amazing fossil animal. The memoir brings together multiple experts to conduct a range of descriptive and comparative analyses and consists of multiple papers describing the geological setting of the fossil, its cranial anatomy, its dental morphology and function, its braincase, and its sensory abilities. David W. Krause of Stony Brook University, the editor of the volume and lead investigator on the project, says, "From an organizational perspective, there are two things about this monograph with which I am particularly delighted. First, that I was fortunate enough to be able to assemble such an outstandingly capable mix of specialists, students, and technicians to focus their attention on this amazing specimen.

Second, the emphasis on micro-CT imaging, and the thousands of hours spent on digital segmentation of each cranial element, was instrumental in allowing us to describe and understand the detailed internal anatomy of the cranium of this bizarre mammal."

Vintana is a member of an extinct and, until now, very poorly known group of mammals, the gondwanatherians, which are named based on their geographic distribution on the southern continents, also known as Gondwana. Previously known fossils of gondwanatherians had consisted only of isolated teeth and a few fragmentary lower jaw specimens.

The new specimen is a nearly complete and only slightly distorted cranium, which was painstakingly removed from a large block of sediment and later micro-CT scanned to provide fine details of both the external and internal anatomy of the animal. These scans also allowed the investigators to digitally separate, or segment, individual cranial bones and allowed them to virtually dissect the specimen without actually destroying it.

These hi-res scans also allowed the authors to include with the memoir, as supplementary material, 3D-interactive PDFs and high-resolution images.

Krause says, "We hope that the memoir will serve as a useful reference for all future discoveries and analyses of gondwanatherian mammals represented by craniodental material."

The cranium displays some bizarre features, like enlarged flanges for attachment of chewing muscles, a strangely tilted braincase, and large eye sockets. Analysis of these features and others reveals that Vintana was a badger-sized, herbivorous animal that was agile and active, with keen senses of smell, vision, and hearing.
John Wible, of the Carnegie Museum in Pittsburgh and one of the experts on the investigation who analyzed the skull and ear region of the fossil, says "With this monograph, the shroud of mystery over the enigmatic, extinct mammal clade Gondwanatheria is lifted. Through CT scans, the amazingly preserved skull of Vintana sertichi is dissected, described, and reconstructed. The authors breathe life into this fossil by reconstructing its brain, inner ear, jaw musculature, orbit, and nasal cavity, and set the bar high for how such studies will be done in the future."