Left:The Stuttgart skull, from a 7,000-year-old skeleton found in Germany among artifacts from the first widespread farming culture of central Europe. Right: Blue eyes and dark skin, that's how the European hunter-gatherer appeared 7,000 years ago. Artist depiction based on La Braña 1, whose remains were recovered at La Braña-Arintero site in León, Spain. 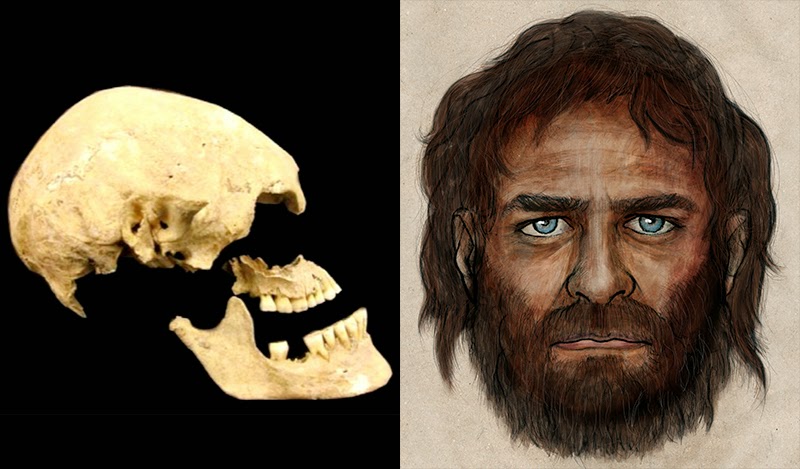 What if you researched your family's genealogy, and a mysterious stranger turned out to be an ancestor?

That's the surprising feeling had by a team of scientists who peered back into Europe's murky prehistoric past thousands of years ago. With sophisticated genetic tools, supercomputing simulations and modeling, they traced the origins of modern Europeans to three distinct populations.

The international research team published their September 2014 results in the journal Nature.

The 8,000 year-old skull discovered in Loschbour, Luxembourg provided DNA evidence for the study of European ancestry. Scientists really only have a handful of ancient remains well-preserved enough for their genomes to be sequenced.

The remains studied were found at the caves of Loschbour, La Braña, Stuttgart, a ritual site at Motala, and at Mal'ta.XSEDE, the Extreme Science and Engineering Discovery Environment, provided the computational resources used in the study. It's a single virtual system that scientists use to interactively share computing resources, data and expertise.

Genomic analysis code ran on Stampede, the nearly 10 petaflop Dell/Intel Linux supercomputer at the Texas Advanced Computing Center (TACC). The research was funded in part by the National Cancer Institute of the National Institutes of Health.

"The main finding was that modern Europeans seem to be a mixture of three different ancestral populations," said study co-author Joshua Schraiber, a National Science Foundation Postdoctoral fellow at the University of Washington.

Schraiber said these results surprised him because the prevailing view among scientists held that only two distinct groups mixed between 7,000 and 8,000 years ago in Europe, as humans first started to adopt agriculture.

Hunter-gatherers with olive skin and mainly blue-eyes first expanded upon the continent about 12,000 years ago, moving north with the retreat of glaciers at the end of the last Ice Age. Later, early European farmers from the Near East migrated west and mixed with the hunter-gatherers. Genetic evidence revealed these farmers had light-colored skin and brown eyes.

The third mystery group that emerged from the data is ancient northern Eurasians. "People from the Siberia area is how I conceptualize it. We don't know too much anthropologically about who these people are. But the genetic evidence is relatively strong, because we do have ancient DNA from an individual that's very closely related to that population, too," Schraiber said.

"Having access to the TACC was really essential for me because at some point I was using a hundred gigabytes of RAM to do something."Joshua Schraiber, National Science Foundation Postdoctoral fellow, University of WashingtonThat individual is a three-year-old-boy whose remains were found near Lake Baikal in Siberia at a site called Mal'ta. Scientists determined his arm bone to be 24,000 years old. They then sequenced his genome, making it the second oldest one yet sequenced of a modern human. Interestingly enough, in late 2013 scientists used the Mal'ta genome to find that about one-third of Native American ancestry originated through gene flow from these ancient North Eurasians.

"I think there was a little bit of luck in this," Schraiber said, referring to the Mal'ta genome. "We knew the models weren't fitting. But we didn't know what was wrong. Luckily, this new ancient DNA had come out."

What scientists did was take the genomes from these ancient humans and compare them to those from 2,345 modern-day Europeans. "I used the POPRES data set, which had been used before to ask similar questions just looking at modern Europeans," Schraiber said. "And then I used a piece of software called Beagle, which was written by Brian Browning and Sharon Browning at the University of Washington, which computationally detects these regions of identity by descent."

"Having access to the Stampede supercomputer at TACC was essential for me because at some point I was using a hundred gigabytes of RAM to do something. It took days, even spreading it across multiple processors. It takes a lot of effort to do this identity by descent detection," Schraiber said.

Working on the hunch that the Mal'ta genome might fill in some missing blanks that the modeling pointed out, Schraiber saw a lot more identity by descent between the ancient individuals and modern individuals than he expected. "It made us happy in a lot of ways to find that these are people who share ancestors with modern Europeans."

Schraiber looks to East Asia and Africa as the next hot spots to study human history as scientists push forward to discover and analyze new sources of ancient DNA.