A new study suggests that the flightless birds named moa were completely extinct by the time New Zealand's human population had grown to two and half thousand people at most.

This is a restoration of an upland moa, Megalapteryx didinus. 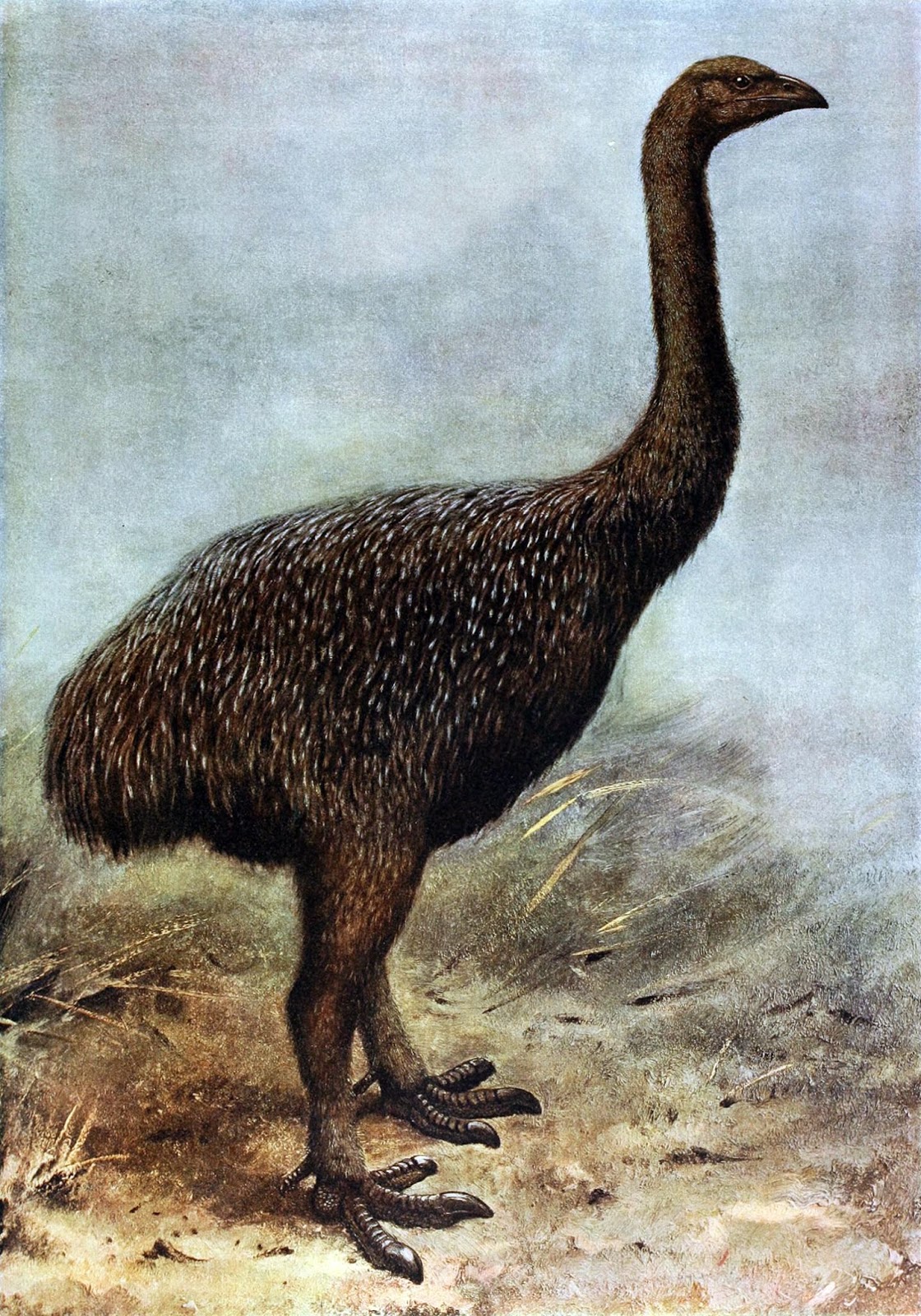 
The researchers calculate that the Polynesians whose activities caused moa extinction in little more than a century had amongst the lowest human population densities on record. They found that during the peak period of moa hunting, there were fewer than 1500 Polynesian settlers in New Zealand, or about 1 person per 100 square kilometres, one of the lowest population densities recorded for any pre-industrial society.

They found that the human population could have reached about 2500 by the time moa went extinct. For several decades before then moa would have been rare luxuries.

Estimates of the human population during the moa hunting period are more sensitive to how long it took to exterminate the birds through hunting and habitat destruction than to the size of the founding population.

To better define the critical period of moa hunting, the research was aimed at "book-ending" the moa hunter period with new estimates for when people started eating moa, and when there were no more moa to eat.

Starting with the latest estimate for a founding population of about 400 people (including 170-230 women), and applying population growth rates in the range achieved by past and present populations, the researchers modelled the human population size through the moa hunter period and beyond. When moa and seals were still available, the better diet enjoyed by the settlers likely fuelled higher population growth, and the analyses took this into account.

The first "book-end" - first evidence for moa hunting - was set by statistical analyses of 93 new high-precision radiocarbon dates on genetically identified moa eggshell pieces. These had been excavated from first settlement era archaeological sites in the eastern South Island, and showed that moa were still breeding nearby.

Chris Jacomb explains: "The analyses showed that the sites were all first occupied - and the people began eating moa - after the major Kaharoa eruption of Mt Tarawera of about 1314 CE."

Ash from this eruption is an important time marker because no uncontested archaeological evidence for settlement has ever been found beneath it, Mr Jacomb says.

The other "book-end" was derived from statistical analyses of 270 high-precision radiocarbon dates on moa from non-archaeological sites. Analysis of 210 of the ages showed that moa were exterminated first in the more accessible eastern lowlands of the South Island, at the end of the 14th century, just 70-80 years after the first evidence for moa consumption.

Analysis of all 270 dates, on all South Island moa species from throughout the South Island, showed that moa survived for only about another 20 years after that.

Their total extinction most probably occurred within a decade either side of 1425 CE, barely a century after the earliest well-dated site, at Wairau Bar near Blenheim, was settled by people from tropical East Polynesia. The last known birds lived in the mountains of north-west Nelson. Professor Holdaway adds that "the results provide further support for the rapid extinction model for moa that Chris Jacomb and I published 14 years ago in [the US journal] Science."

The researchers note that it is often suggested that people could not have caused the extinction of megafauna such as the mammoths and giant sloths of North America and the giant marsupials of Australia, because the human populations when the extinctions happened were too small.

Prof Holdaway and Mr Jacomb say that the extinction of the New Zealand terrestrial megafauna of moa, giant eagle, and giant geese, accomplished by the direct and indirect activities of a very low-density human population, shows that population size can no longer be used as an argument against human involvement in extinctions elsewhere.