Using the Very Large Telescope Interferometer (VLTI) in near-infrared light, the team of astronomers observed 92 nearby stars to probe exozodiacal light from hot dust close to their habitable zones and combined the new data with earlier observations.

Bright exozodiacal light, created by the glowing grains of hot exozodiacal dust, or the reflection of starlight off these grains, was observed around nine of the targeted stars.

This artist's view from an imagined planet around a nearby star shows the brilliant glow of exozodiacal light extending up into the sky and swamping the Milky Way. This light is starlight reflected from hot dust created as the result of collisions between asteroids, and the evaporation of comets. The presence of such thick dust clouds in the inner regions around some stars may pose an obstacle to the direct imaging of Earth-like planets in the future. 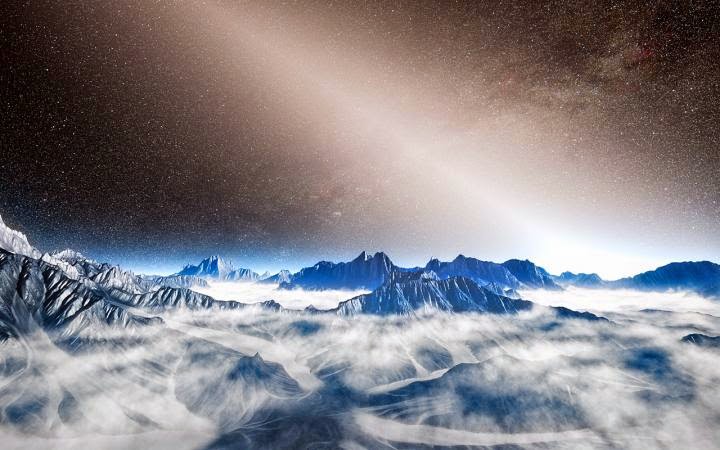 From dark clear sites on Earth, zodiacal light looks like a faint diffuse white glow seen in the night sky after the end of twilight, or before dawn. It is created by sunlight reflected off tiny particles and appears to extend up from the vicinity of the Sun. This reflected light is not just observed from Earth but can be observed from everywhere in the Solar System.

The glow being observed in this new study is a much more extreme version of the same phenomenon. While this exozodiacal light — zodiacal light around other star systems — had been previously detected, this is the first large systematic study of this phenomenon around nearby stars.

In contrast to earlier observations the team did not observe dust that will later form into planets, but dust created in collisions between small planets of a few kilometres in size — objects called planetesimals that are similar to the asteroids and comets of the Solar System. Dust of this kind is also the origin of the zodiacal light in the Solar System.

"If we want to study the evolution of Earth-like planets close to the habitable zone, we need to observe the zodiacal dust in this region around other stars," said Steve Ertel, lead author of the paper, from ESO and the University of Grenoble in France. "Detecting and characterising this kind of dust around other stars is a way to study the architecture and evolution of planetary systems."

Detecting faint dust close to the dazzling central star requires high resolution observations with high contrast. Interferometry — combining light collected at the exact same time at several different telescopes — performed in infrared light is, so far, the only technique that allows this kind of system to be discovered and studied.

By using the power of the VLTI and pushing the instrument to its limits in terms of accuracy and efficiency, the team was able to reach a performance level about ten times better than other available instruments in the world.

For each of the stars the team used the 1.8-metre Auxiliary Telescopes to feed light to the VLTI. Where strong exozodical light was present they were able to fully resolve the extended discs of dust, and separate their faint glow from the dominant light of the star.

By analysing the properties of the stars surrounded by a disc of exozodiacal dust, the team found that most of the dust was detected around older stars. This result was very surprising and raises some questions for our understanding of planetary systems. Any known dust production caused by collisions of planetesimals should diminish over time, as the number of planetesimals is reduced as they are destroyed.

The sample of observed objects also included 14 stars for which the detection of exoplanets has been reported. All of these planets are in the same region of the system as the dust in the systems showing exozodiacal light. The presence of exozodiacal light in systems with planets may create a problem for further astronomical studies of exoplanets.

Exozodiacal dust emission, even at low levels, makes it significantly harder to detect Earth-like planets with direct imaging. The exozodiacal light detected in this survey is a factor of 1000 times brighter than the zodiacal light seen around the Sun. The number of stars containing zodiacal light at the level of the Solar System is most likely much higher than the numbers found in the survey. These observations are therefore only a first step towards more detailed studies of exozodiacal light.

"The high detection rate found at this bright level suggests that there must be a significant number of systems containing fainter dust, undetectable in our survey, but still much brighter than the Solar System's zodiacal dust," explains Olivier Absil, co-author of the paper, from the University of Liège. "The presence of such dust in so many systems could therefore become an obstacle for future observations, which aim to make direct images of Earth-like exoplanets."
The team used the VLTI visitor instrument PIONIER, which is able to interferometrically connect all four Auxiliary Telescopes or all four Unit Telescopes of the VLT at the Paranal Observatory. This led to not only extremely high resolution of the targets but also allowed for a high observing efficiency.

Previous observations were made with the CHARA array — an optical astronomical interferometer operated by the Center for High Angular Resolution Astronomy (CHARA) of the Georgia State University, and its fibred beam combiner FLUOR.
As a by-product, these observations have also led to the discovery of new, unexpected stellar companions orbiting around some of the most massive stars in the sample. "These new companions suggest that we should revise our current understanding of how many of this type of star are actually double," says Lindsay Marion, lead author of an additional paper dedicated to this complementary work using the same data.

Announcement on the PIONIER Instrument: http://www.eso.org/public/announcements/ann1081/

This research was presented in a paper "A near-infrared interferometric survey of debris-disc stars. IV. An unbiased sample of 92 southern stars observed in H-band with VLTI/PIONIER", by S. Ertel et al., to appear in the journal Astronomy & Astrophysics. The complementary paper on companion stars found in the survey is "Searching for faint companions with VLTI/PIONIER. II. 92 main sequence stars from the Exozodi survey", by L. Marion et al., in the same edition of the journal.