Metastasis is bad news for cancer patients. Northwestern University scientists now have demonstrated a simple but powerful tool that can detect live cancer cells in the bloodstream, potentially long before the cells could settle somewhere in the body and form a dangerous tumor.

NanoFlares-specially designed stem cells that have been developed to detect blood-borne cancers. When the cells come in contact with cancerous cells, they emit light. 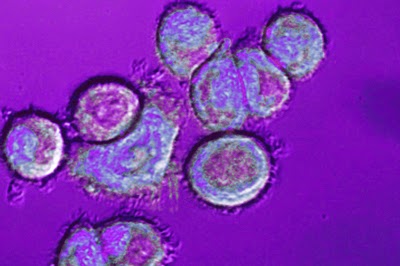 Courtesy of the International Institute for Nanotechnology at Northwestern University

The NanoFlare technology is the first genetic-based approach that is able to detect live circulating tumor cells out of the complex matrix that is human blood -- no easy feat. In a breast cancer study, the NanoFlares easily entered cells and lit up the cell if a biomarker target was present, even if only a trace amount. The NanoFlares are tiny spherical nucleic acids with gold nanoparticle cores outfitted with single-stranded DNA “flares.”

“This technology has the potential to profoundly change the way breast cancer in particular and cancers in general are both studied and treated,” said Chad A. Mirkin, a nanomedicine expert and a corresponding author of the study.

The research team, in a paper to be published the week of Nov. 17 by the Proceedings of the National Academy of Sciences (PNAS), reports two key innovations:

• The ability to track tumor cells in the bloodstream based on genetic content located within the cell itself, as opposed to using proteins located on the cell’s surface (current technology)

• The ability to collect the cells in live form, so they may be studied and used to inform researchers and clinicians as to how to treat a disease -- an important step toward personalized medicine

“Cancers are very genetically diverse, and it’s important to know what cancer subtype a patient has,” Mirkin said. “Now you can think about collecting a patient’s cells and studying how those cells respond to different therapies. The way a patient responds to treatment depends on the genetic makeup of the cancer.”

A NanoFlare is designed to recognize a specific genetic code snippet associated with a cancer. The core nanoparticle, only 13 nanometers in diameter, enters cells, and the NanoFlare seeks its target. If the genetic target is present in the cell, the NanoFlare binds to it and the reporter “flare” is released to produce a fluorescent signal. The researchers then can isolate those cells.

“The NanoFlare turns on a light in the cancer cells you are looking for,” said Thaxton, an assistant professor of urology at Feinberg. “That the NanoFlares are effective in the complex matrix of human blood is a great technical advance. We can find small numbers of cancer cells in blood, which really is like searching for a needle in a haystack.”

“This could lead to personalized therapy where we can look at how an individual’s cells respond to different therapeutic cocktails,” said Mirkin, whose lab developed NanoFlares in 2007. 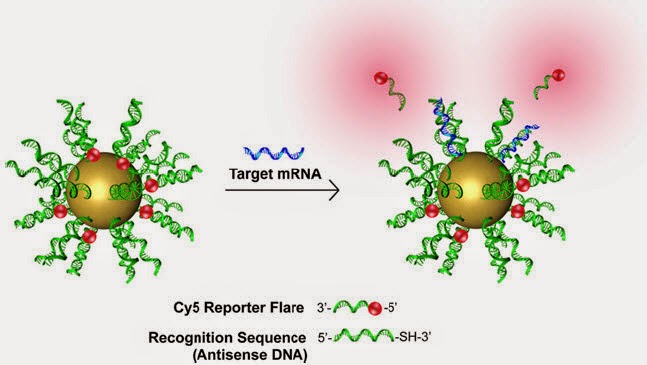 In the study, the genetic targets were messenger RNA (mRNA) that code for certain proteins known to be biomarkers for aggressive breast cancer cells.

The research team first used the blood of healthy individuals, spiking some of the blood with living breast cancer cells to see if the NanoFlares could detect them. (Unspiked blood was used as a control.)

Cheng, an assistant professor of medicine in hematology/oncology at Feinberg, provided the cell lines and NanoFlare targets the researchers used to model blood samples taken from breast cancer patients.

The research team tested four different NanoFlares, each with a different genetic target relevant to breast cancer metastasis. The technology successfully detected the cancer cells with less than 1 percent incidence of false-negative results.

Currently, in another study, the researchers are focused on detecting circulating tumor cells in the blood of patients with a diagnosis of breast cancer.

“When it comes to detecting and treating cancer, the mantra is the earlier, the better,” Thaxton said. “This technology may enable us to better detect circulating cancer cells and provides another tool to add to the toolkit of cancer diagnosis.

The National Cancer Institute, the National Institutes of Health, the American Cancer Society, the Air Force Office of Scientific Research and the Howard Hughes Medical Institute supported the research.

Citation: “NanoFlares for the detection, isolation, and culture of live tumor cells from human blood.”
on November 30, 2014