In his general theory of relativity, Albert Einstein predicted that there are such things as gravitational waves. In fact, the very existence of these waves is the linchpin of the entire theory. Despite the great lengths that physicists have gone to in recent decades, however, they still have not managed to detect them directly with a measurement. This could largely be due to the fact that this requires a level of precision that it is practically impossible to achieve with today's measuring devices.


Zoom into Markarian 177 and SDSS1133 and see how they compare with a simulated galaxy collision. When the central black holes in these galaxies combine, a "kick" launches the merged black hole on a wide orbit taking it far from the galaxy's core.
Credit: NASA's Goddard Space Flight Center/L. Blecha (UMD)

Ultimately, it is all about measuring the tiniest of compressions and extensions of space which, according to Einstein's theory, arise when gravitational waves pass through it. And even using the high-precision measuring equipment of the future, only waves with a corresponding level of intensity may well be detectable, such as those formed during the fusion of two merging black holes.

If two galaxies head towards each other in space and eventually collide, they merge into one. The two supermassive black holes in the centre of the two galaxies also fuse. In this process, if the general theory of relativity holds true, gravitational waves are formed and spread out in space. 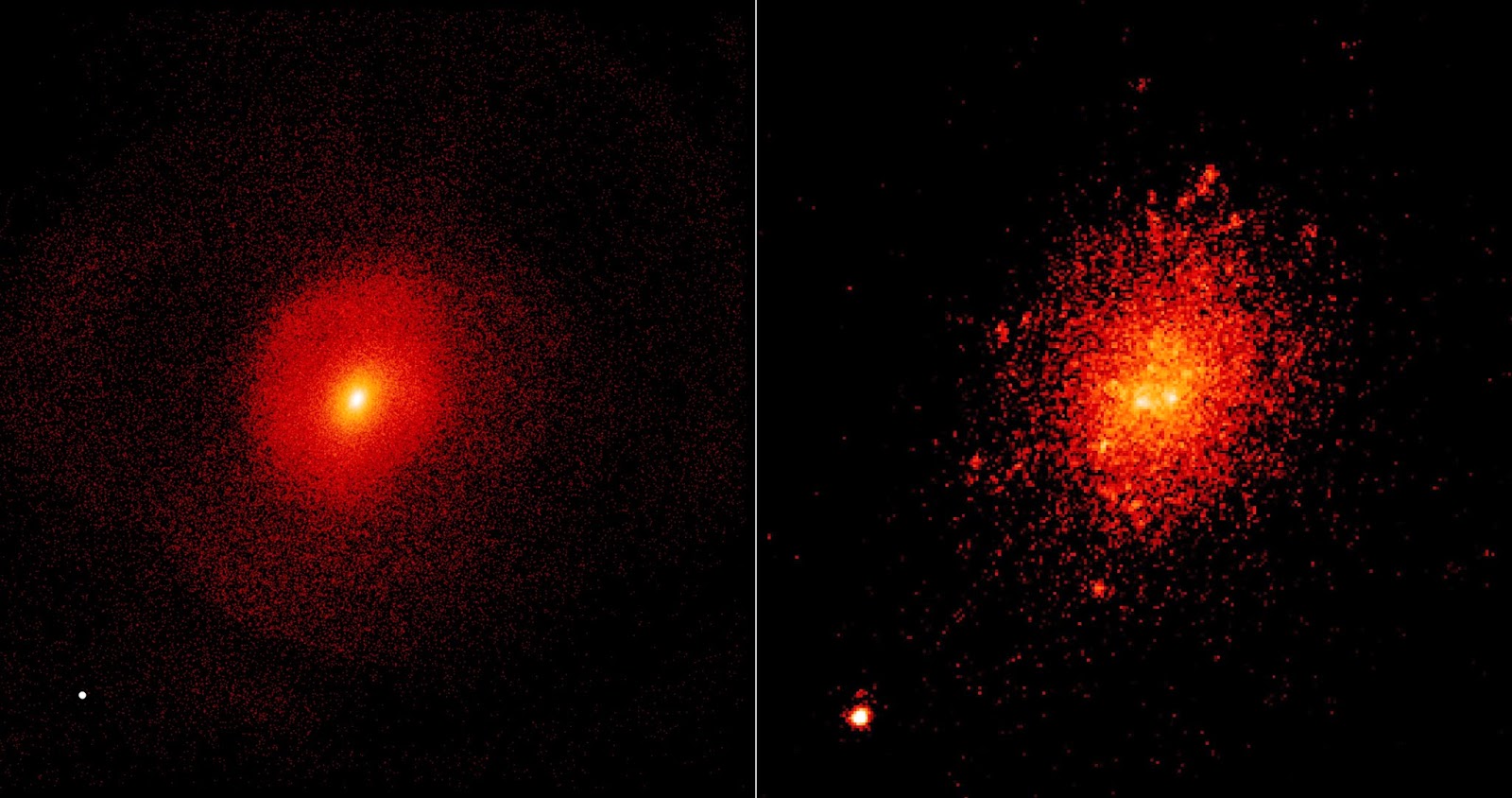 If the black holes have unequal masses or are spinning at different speeds, the gravitational waves will be emitted asymmetrically - giving the fused black hole a "kick" that propels it in the opposite direction. In some cases, this recoil kick is relatively weak and the fused black hole drifts back into the centre. In other cases, however, the kick is strong enough to propel the black hole out of the galaxy entirely, where it will forever wander through the universe.

Remnant of a Collision Between Two Galaxies...

Astronomers have been searching for such recoiling black holes, but have not found any strong candidates yet. An international team of scientists including Kevin Schawinski, a professor at the Institute for Astronomy at ETH Zurich, and Michael Koss, a Swiss National Science Foundation Ambizione Fellow working with the Schawinski group, discovered an object that may in fact be a recoiling black hole.
SDSS1133 (bright spot, lower left) has been a persistent source for more than 60 years. This sequence of archival astronomical imagery, taken through different instruments and filters, shows that the source is detectable in 1950 and brightest in 2001.

The researchers first realized that SDSS1133 was a unique object last year, while observing it with a reflecting telescope at the Keck Observatory in Hawaii. Comparisons with an astronomical map from 2001 showed that it was already ten times weaker last year than in 2001 - and although the object was visible on maps from the 1950s and 1990s, it could only be seen very weakly. SDSS1133 shone very brightly in 2001 but did not go completely dark afterwards, which showed that it cannot be a normal supernova - the life-ending explosion of a star - because supernovae tend to be detectable for only a few months before fading significantly.

From a comparison of the wavelength spectrum of the light emitted by SDSS1133 and a nearby dwarf galaxy the scientists concluded that the object might be a black hole that belonged to this dwarf galaxy at one stage and was jettisoned out of it.

... Or One of the Longest-lived Supernovae?

And yet the researchers are far from certain, mainly because there is a second, more exotic possibility: SDSS1133 could be a new type of long-duration outburst before a supernova within a giant star. This giant star would have lost much of its mass in a series of eruptions over the course of at least 50 years before its final explosion.

The dwarf galaxy Markarian 177 (center) and its unusual source SDSS1133 (blue) lie 90 million light-years away. The galaxies are located in the bowl of the Big Dipper, a well-known star pattern in the constellation Ursa Major. 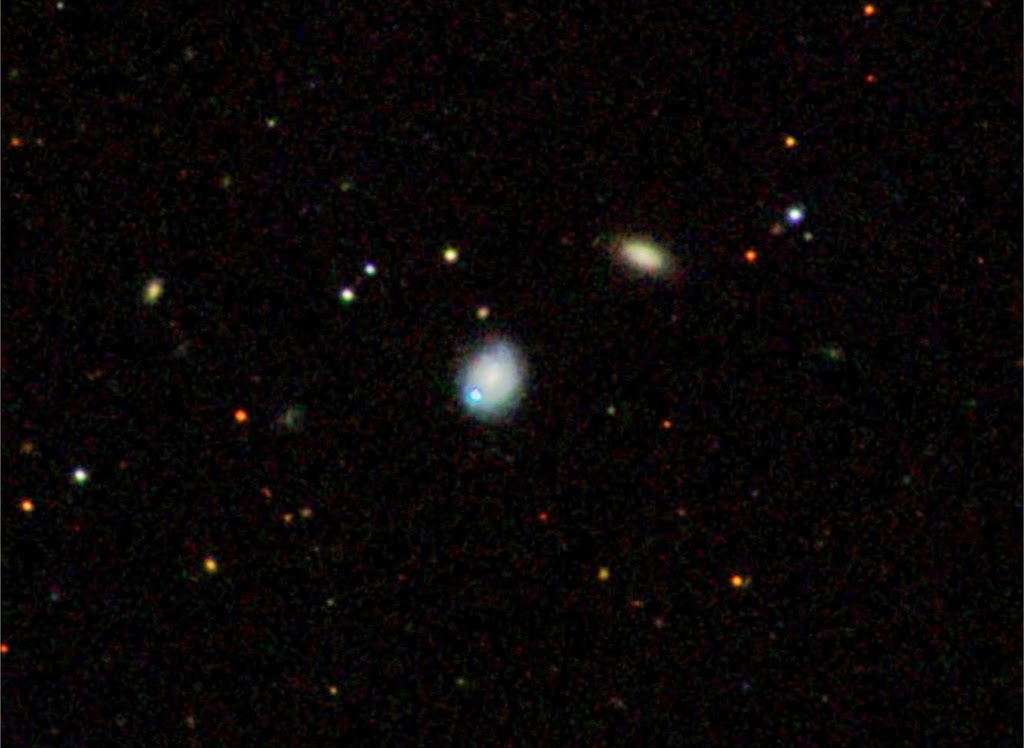 Scientists have already observed stars changing in this fashion: Eta Carinae, one of the most massive stars in our own galaxy, briefly became the second-brightest star in the sky in 1843. If this type of activity were also the explanation for SDSS1133, that would make it the longest continuous outbursts ever observed before a supernova.

Answers on the Horizon

ETH scientists will have the opportunity to search for answers to these questions next year. Black holes and supernovae both emit ultraviolet light, but with differing wavelengths. The researchers have been allocated observation time with the Hubble Space Telescope in October 2015 in order to measure this spectrum more precisely.

Using the Keck II telescope in Hawaii, researchers obtained high-resolution images of Markarian 177 and SDSS1133 using a near-infrared filter. Twin bright spots in the galaxy's central region are consistent with recent star formation, a disturbance that hints this galaxy may have merged with another. 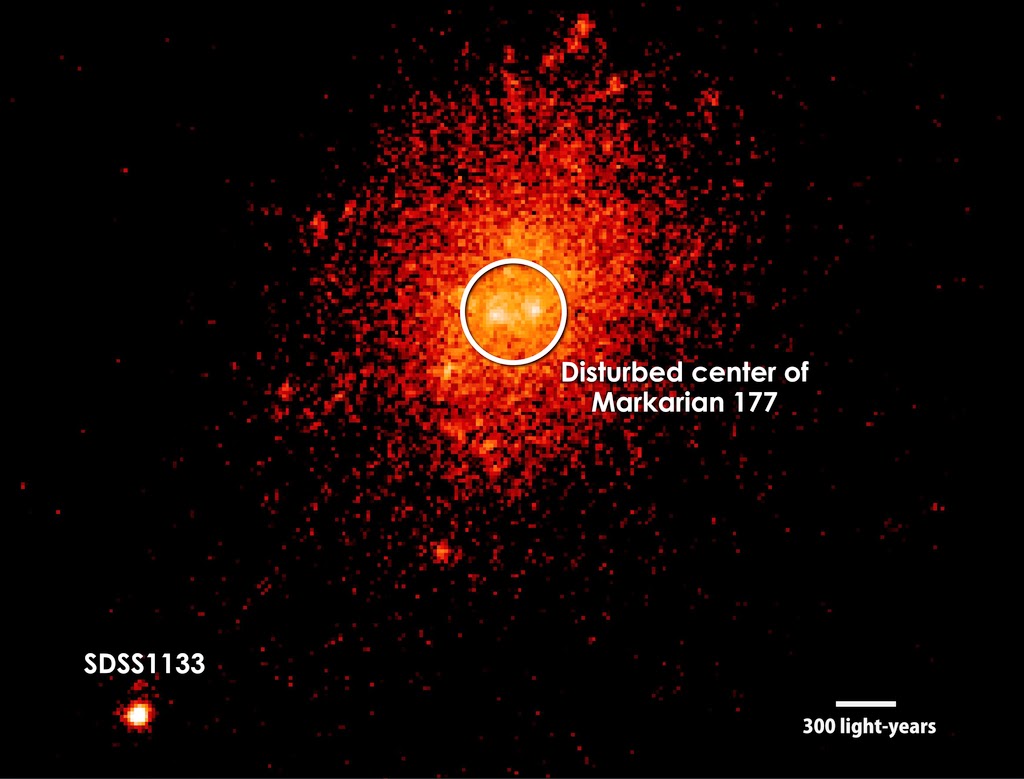 Changes in the object's brightness in the coming years will also give scientists clues as to whether they are dealing with a jettisoned black hole or an exploding mega-star: for a recoiling black hole they expect to see variable brightness, whereas the brightness of a supernova explosion should generally decrease over time. "Whether SDSS1133 is a recoiling black hole or an exploding mega-star, we are observing something that has never before been seen in the universe", says Michael Koss.

A computer simulation of colliding galaxies shows how merged supermassive black holes can be placed in an elongated orbit. The simulation begins with disks of stars, gas and dark matter representing two galaxies of comparable mass; only the stars are shown. The galaxies make a close pass that results in trong tidal distortions that warp their disks. These disturbances trigger instabilities that drive gas to the galaxy centers, where it forms new stars and fuels the supermassive black holes.

Before the galaxies completely merge, their black holes spiral together and coalesce. Gravitational waves emitted in the merger create a "recoil kick" that ejects the black hole from the galaxy's center; in this case, the kick is 90 percent of the escape speed. The simulation stops just as the black hole reaches the farthest point of its orbit, which is why it slows down in the last few frames. The video represents an elapsed time of about 2.7 billion years. The simulation took five days to complete on the Odyssey computing cluster at Harvard University.

Credit: L. Blecha (UMD)
And should they discover that the object is in fact a recoiling black hole, that would considerably increase the odds of one day being able to detect gravitational waves. The scientists estimate that the recoil, if confirmed, occurred around ten million years ago. Consequently, it is not this object in itself that would be important for the concrete measurement of gravitational waves, but rather the fact that it is existing. "Dwarf galaxies are very common," says Koss. "Therefore it would be highly probable that other recoil events would appear before too long. The hope is that we would be able to observe one near Earth and measure the gravitational waves."

The European Space Agency (ESA) will use space probes and laser interferometers to detect gravitational waves in space during one of its next large-scale missions, "eLISA". The launch of the probes has been scheduled for 2034. However, the preparatory mission LISA Pathfinder is already due to blast off next year with a view to testing key technologies for eLISA. ETH Zurich is also involved in LISA Pathfinder.