Dark Matter May Be Massive 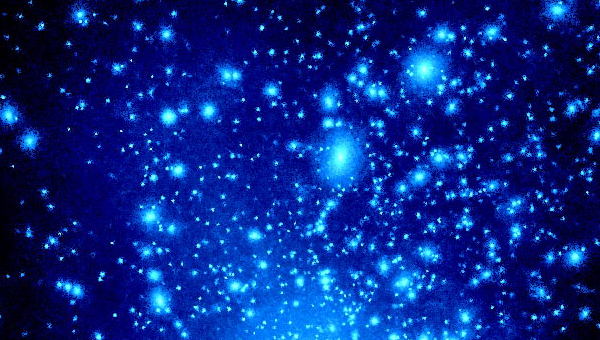 Dark matter is unseen matter, that, combined with normal matter, could create the gravity that, among other things, prevents spinning galaxies from flying apart. Physicists calculate that dark matter comprises 27 percent of the universe; normal matter 5 percent.

Instead of WIMPS, weakly interacting massive particles, or axions, which are weakly interacting low-mass particles, dark matter may be made of macroscopic objects, anywhere from a few ounces to the size of a good asteroid, and probably as dense as a neutron star, or the nucleus of an atom, the researchers suggest.

Physics professor Glenn Starkman and David Jacobs, who received his PhD in Physics from CWRU in May and is now a fellow at the University of Cape Town, say published observations provide guidance, limiting where to look. They lay out the possibilities in a paper athttp://arxiv.org/pdf/1410.2236.pdf.

The Macros, as Starkman and Jacobs call them, would not only dwarf WIMPS and axions, but differ in an important way. They could potentially be assembled out of particles in the Standard Model of particle physics instead of requiring new physics to explain their existence.

"We've been looking for WIMPs for a long time and haven't seen them," Starkman said. "We expected to make WIMPS in the Large Hadron Collider, and we haven't."

"The community had kind of turned away from the idea that dark matter could be made of normal-ish stuff in the late '80s," Starkman said. "We ask, was that completely correct and how do we know dark matter isn't more ordinary stuff— stuff that could be made from quarks and electrons?"

After eliminating most ordinary matter, including failed Jupiters, white dwarfs, neutron stars, stellar black holes, the black holes in centers of galaxies and neutrinos with a lot of mass, as possible candidates, physicists turned their focus on the exotics.

Matter that was somewhere in between ordinary and exotic—relatives of neutron stars or large nuclei—was left on the table, Starkman said. "We say relatives because they probably have a considerable admixture of strange quarks, which are made in accelerators and ordinarily have extremely short lives," he said.

Although strange quarks are highly unstable, Starkman points out that neutrons are also highly unstable. But in helium, bound with stable protons, neutrons remain stable.

The Macros would have to be assembled from ordinary and strange quarks or baryons before the strange quarks or baryons decay, and at a temperature above 3.5 trillion degrees Celsius, comparable to the temperature in the center of a massive supernova, Starkman and Jacobs calculated. The quarks would have to be assembled with 90 percent efficiency, leaving just 10 percent to form the protons and neutrons found in the universe today.

The limits of the possible dark matter are as follows:

A minimum of 55 grams. If dark matter were smaller, it would have been seen in detectors in Skylab or in tracks found in sheets of mica.

A maximum of 1024 (a million billion billion) grams. Above this, the Macros would be so massive they would bend starlight, which has not been seen.

The range of 1017 to 1020 grams per centimeter squared should also be eliminated from the search, the theorists say. Dark matter in that range would be massive for gravitational lensing to affect individual photons from gamma ray bursts in ways that have not been seen.

If dark matter is within this allowed range, there are reasons it hasn't been seen.

At the mass of 1018 grams, dark matter Macros would hit the Earth about once every billion years.

At lower masses, they would strike the Earth more frequently but might not leave a recognizable record or observable mark.

In the range of 109 to 1018, dark matter would collide with the Earth once annually, providing nothing to the underground dark matter detectors in place.