Bizarre Object At The Center Of Our Galaxy

For years, astronomers have been puzzled by a bizarre object in the center of the Milky Way that was believed to be a hydrogen gas cloud headed toward our galaxy's enormous black hole.

Having studied it during its closest approach to the black hole this summer, UCLA astronomers believe that they have solved the riddle of the object widely known as G2.

Telescopes from Hawaii's W.M. Keck Observatory use a powerful technology called adaptive optics, which enabled UCLA astronomers to discover that G2 is a pair of binary stars that merged together, cloaked in gas and dust. 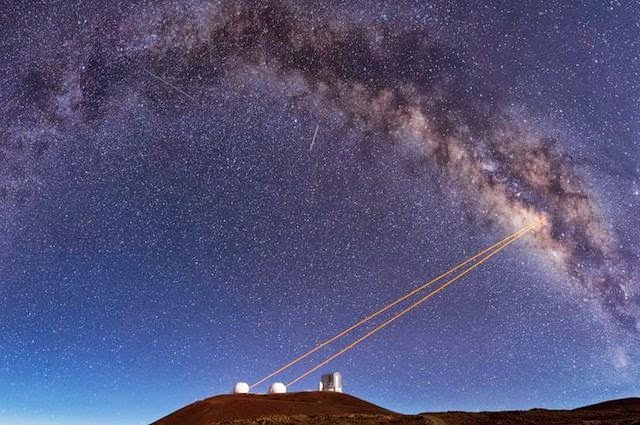 A team led by Andrea Ghez, professor of physics and astronomy in the UCLA College, determined that G2 is most likely a pair of binary stars that had been orbiting the black hole in tandem and merged together into an extremely large star, cloaked in gas and dust — its movements choreographed by the black hole's powerful gravitational field. The research is published today in the journal Astrophysical Journal Letters.

Astronomers had figured that if G2 had been a hydrogen cloud, it could have been torn apart by the black hole, and that the resulting celestial fireworks would have dramatically changed the state of the black hole.

"G2 survived and continued happily on its orbit; a simple gas cloud would not have done that," said Ghez, who holds the Lauren B. Leichtman and Arthur E. Levine Chair in Astrophysics. "G2 was basically unaffected by the black hole. There were no fireworks."

Black holes, which form out of the collapse of matter, have such high density that nothing can escape their gravitational pull — not even light. They cannot be seen directly, but their influence on nearby stars is visible and provides a signature, said Ghez, a 2008 MacArthur Fellow.

Ghez, who studies thousands of stars in the neighborhood of the supermassive black hole, said G2 appears to be just one of an emerging class of stars near the black hole that are created because the black hole's powerful gravity drives binary stars to merge into one. She also noted that, in our galaxy, massive stars primarily come in pairs. She says the star suffered an abrasion to its outer layer but otherwise will be fine.

Ghez and her colleagues — who include lead author Gunther Witzel, a UCLA postdoctoral scholar, and Mark Morris and Eric Becklin, both UCLA professors of physics and astronomy — conducted the research at Hawaii's W.M. Keck Observatory, which houses the world's two largest optical and infrared telescopes.

When two stars near the black hole merge into one, the star expands for more than 1 million years before it settles back down, said Ghez, who directs the UCLA Galactic Center Group. "This may be happening more than we thought. The stars at the center of the galaxy are massive and mostly binaries. It's possible that many of the stars we've been watching and not understanding may be the end product of mergers that are calm now."

Ghez and her colleagues also determined that G2 appears to be in that inflated stage now. The body has fascinated many astronomers in recent years, particularly during the year leading up to its approach to the black hole. "It was one of the most watched events in astronomy in my career," Ghez said.

Ghez said G2 now is undergoing what she calls a "spaghetti-fication" — a common phenomenon near black holes in which large objects become elongated. At the same time, the gas at G2's surface is being heated by stars around it, creating an enormous cloud of gas and dust that has shrouded most of the massive star.

Witzel said the researchers wouldn't have been able to arrive at their conclusions without the Keck's advanced technology. "It is a result that in its precision was possible only with these incredible tools, the Keck Observatory's 10-meter telescopes," Witzel said.

The telescopes use adaptive optics, a powerful technology pioneered in part by Ghez that corrects the distorting effects of the Earth's atmosphere in real time to more clearly reveal the space around the supermassive black hole. The technique has helped Ghez and her colleagues elucidate many previously unexplained facets of the environments surrounding supermassive black holes.

"We are seeing phenomena about black holes that you can't watch anywhere else in the universe," Ghez added. "We are starting to understand the physics of black holes in a way that has never been possible before."

The research was funded by the National Science Foundation, the Lauren Leichtman and Arthur Levine Chair in Astrophysics, the Preston Family Graduate Student Fellowship and the Janet Marott Student Travel Awards. The W. M. Keck Observatory is operated as a scientific partnership among the University of California, Caltech and NASA.