Nestled among a triplet of young galaxies more than 12.5 billion light-years away is a cosmic powerhouse: a galaxy that is producing stars nearly 1,000 times faster than our own Milky Way. This energetic starburst galaxy, known as AzTEC-3, together with its gang of calmer galaxies may represent the best evidence yet that large galaxies grow from the merger of smaller ones in the early Universe, a process known as hierarchical merging.

Artist's impression of the protocluster observed by ALMA. It shows the central starburst galaxy AzTEC-3 along with its labeled cohorts of smaller, less active galaxies. New ALMA observations suggest that AzTEC-3 recently merged with another young galaxy and that the whole system represents the first steps toward forming a galaxy cluster. 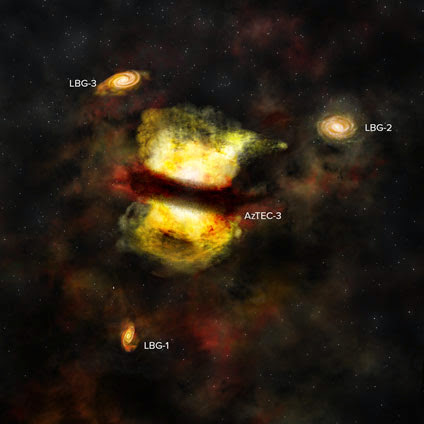 An international team of astronomers observed these remarkable objects with the Atacama Large Millimeter/submillimeter Array (ALMA).

"The ALMA data reveal that AzTEC-3 is a very compact, highly disturbed galaxy that is bursting with new stars at close to its theoretically predicted maximum limit and is surrounded by a population of more normal, but also actively star-forming galaxies," said Dominik Riechers, an astronomer and assistant professor at Cornell University in Ithaca, New York, and lead author on a paper published today (Nov. 10) in the Astrophysical Journal. "This particular grouping of galaxies represents an important milestone in the evolution of our Universe: the formation of a galaxy cluster and the early assemblage of large, mature galaxies."

Combined data from Japan's Subaru telescope and ALMA of the AzTEC-3 region; the circled regions are members of this protocluster, which were previously highlighted by Subaru. The ALMA data are highlighted with arrows. 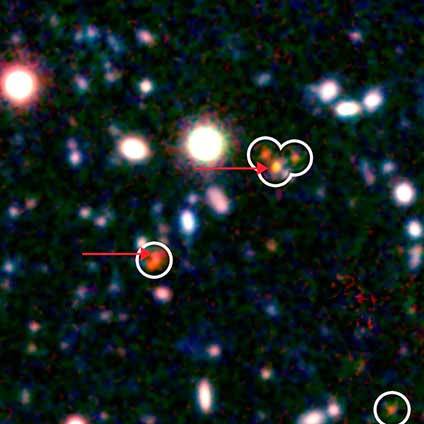 In the early Universe, starburst galaxies like AzTEC-3 were forming new stars at a monstrous pace fueled by the enormous quantities of star-forming material they devoured and by merging with other adolescent galaxies. Over billions of years, these mergers continued, eventually producing the large galaxies and clusters of galaxies we see in the Universe today.

Evidence for this hierarchical model of galaxy evolution has been mounting, but these latest ALMA data show a strikingly clear picture of the all-important first steps along this process when the Universe was only 8 percent of its current age.

Image of the star-forming gas in AzTEC-3 (upper right) and its neighbor LBG-1 (lower left) observed by ALMA. 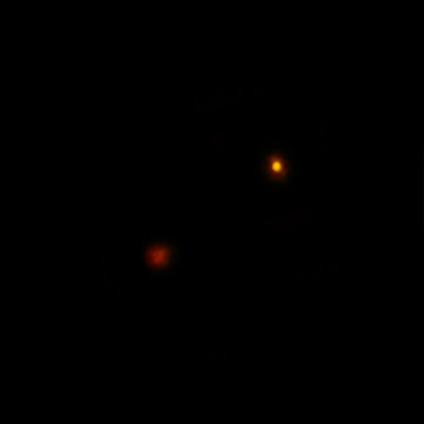 "One of the primary science goals of ALMA is the detection and detailed study of galaxies throughout cosmic time," said Chris Carilli, an astronomer with the National Radio Astronomy Observatory in Socorro, New Mexico. "These new observations help us put the pieces together by showing the first steps of a galaxy merger in the early Universe."

AzTEC-3, which is located in the direction of the constellation Sextans, is what astronomers refer to as a submillimeter galaxy, since it shines brightly in that portion of the spectrum, but is remarkably dim at optical and infrared wavelengths. This is due to light from its stars being absorbed by dust in the star-forming environments of the galaxy and then re-emitted by the dust at far-infrared wavelengths. As this light travels across the cosmos, it becomes stretched due to the expansion of the Universe, so by the time it arrives at Earth, the far-infrared light has shifted to the submillimeter/millimeter portion of the spectrum.

ALMA, with its remarkable sensitivity and high resolving power, was able to observe this system at these wavelengths in unprecedented detail. It also was able to study, for the first time, the star-forming gas in three additional, extremely distant members of an emerging galactic protocluster.

The ALMA data revealed that the three smaller, more normal galaxies are indeed producing stars from their gas at a relatively calm and steady pace. Unlike its neighbors, however, AzTEC-3 is burning through star-forming fuel at breakneck speed. Indeed, AzTEC-3 appears to form more new stars each day than our Milky Way galaxy forms in an entire year -- outpacing the normal galaxies in its proximity by about a factor of 100.

The researchers also observed very little rotation in AzTEC-3's dust and gas -- suggesting that something had disrupted its motion. Taken together, these two characteristics are strong indications that AzTEC-3 recently merged with another galaxy.

"AzTEC-3 is currently undergoing an extreme, but short-lived event," said Riechers. "This is perhaps the most violent phase in its evolution, leading to a star formation activity level that is very rare at its cosmic epoch."

The astronomers believe that AzTEC-3 and the other nearby galaxies appear to be part of the same system, but are not yet gravitationally bound into a clearly defined cluster. This is why the astronomers refer to them collectively as a protocluster.

The starburst galaxy was originally observed with and named after the AzTEC millimeter-wavelength camera, which was installed at the time on the James Clerk Maxwell Telescope, a single-dish radio telescope located on Mauna Kea, Hawaii. Only with ALMA has it become possible to understand the nature of this exceptional galaxy and those in its immediate environment.