The latest research on the oldest surviving rock art of Southeast Asia shows that the region’s first people, hunter-gatherers who arrived over 50,000 years ago, brought with them a rich art practice.

A naturalistic painting of a deer at a rock art site near Siem Reap, Cambodia is the oldest painting of the region . 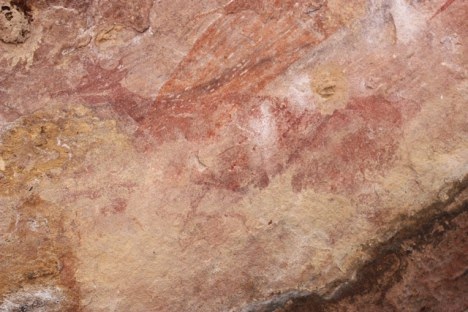 Published this week in the archaeological journal Antiquity, the research shows that these earliest people skilfully produced paintings of animals in rock shelters from southwest China to Indonesia. Besides these countries, early sites were also recorded in Thailand, Cambodia and Malaysia.

The oldest paintings were identified by analysing overlapping superimpostions of art in various styles as well as numerical dating. It was found that the oldest art mainly consists of naturalistic images of wild animals and, in some locations, hand stencils.

The research shows that 35,000 – 40,000 year old dates for some rock art in Sulawesi, Indonesia announced in October by Griffith University Senior Research Fellow Maxime Aubert is not an anomaly. Instead, the practice was widespread across the region.

A bull from the Xianrendong rock art site (Yunnan, China) is a natural projection of stone that resembles a profile animal. It was painted with red ochre to highlight the head, front legs and side of the body. The head has a natural hole for an eye. The image was enhanced with DStretch

Professor Taçon said that, “As with the early art of Europe, the oldest Southeast Asian images often incorporated or were placed in relation to natural features of rock surfaces.

“This shows a purposeful engagement with the new places early peoples arrived in for both symbolic and practical reasons.

“Essentially, they humanised landscapes wherever they went, transforming them from wild places to cultural landscapes. This was the beginning of a process that continues to this day.”

But unlike in Europe, the oldest surviving rock art of Southeast Asia is more often found in rock shelters rather than deep caves, suggesting experiences in deep caves cannot have been their inspiration as has long been argued for Europe.

“This significantly shifts debates about the origins of art-making and supports ideas that this fundamental human behaviour began with our most ancient ancestors in Africa rather than Europe.

“The research supports the idea suggested by the early Indonesian rock art dates that modern humans brought the practice of making semi-permanent images in rocky landscapes to Europe and Asia from Africa,’’ Professor Taçon said.

Hand stencils like these ones were recently shown to have been made up to 40,000 years ago in Sulawesi, Indonesia but are also found at the earliest surviving rock art sites of northern Australia

These results have implications not only for our understanding of Southeast Asian and European rock art but also Australian, because in Kakadu-Arnhem Land and other parts of northern Australia the oldest surviving rock art also consists of naturalistic animals and stencils.

Thus the practice of making these sorts of designs may have been brought to Australia at the time of initial colonisation, but it may alternatively have been independently invented or resulted from as yet unknown forms of culture contact.

All three possibilities are equally intriguing. New investigations in both northern Australia and Southeast Asia are currently being planned.