Supersonic, Bi-Directional Flying Wing Would Fly From New York To Tokyo In 4 Hours

Imagine flying from New York to Tokyo in only four hours aboard a fuel-efficient supersonic jet that looks like something right out of Star Wars. Such a plane could become reality in the next two to three decades, thanks to the efforts of a University of Miami aerospace engineering professor.

Ge-Cheng Zha’s supersonic, bi-directional flying wing will be able to whisk passengers from New York to Tokyo in four hours. 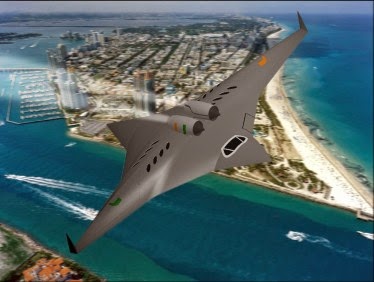 Ge-Cheng Zha, along with collaborators from Florida State University, is designing a supersonic, bi-directional flying wing (SBiDir-FW) capable of whisking passengers to destinations in significantly less time than it would take conventional aircraft—and without the sonic boom generated by aircraft breaking the sound barrier.

The project has just been awarded a $100,000 grant from NASA’s prestigious Innovative Advanced Concepts program, allowing Zha and colleagues to continue development of their high-tech, futuristic plane.

“I am glad that this novel concept is recognized by the technological authorities for its scientific merit,” said Zha, a professor in UM’s College of Engineering and principal investigator of the project. “This prize means that NASA rewards audacious thinking.”

NASA selected Zha’s design and other the projects based on their potential to transform future aerospace missions, enable new capabilities, or significantly alter and improve current approaches to launching, building, and operating aerospace systems.

“These selections represent the best and most creative new ideas for future technologies that have the potential to radically improve how NASA missions explore new frontiers,” said Michael Gazarik, director of NASA’s Space Technology Program. “Through the NASA Innovative Advanced Concepts program, NASA is taking the long-term view of technological investment and the advancement that is essential for accomplishing our missions. We are inventing the ways in which next-generation aircraft and spacecraft will change the world and inspiring Americans to take bold steps.”

“I am hoping to develop an environmentally friendly and economically viable airplane for supersonic civil transport in the next 20 to 30 years,” said Zha. “Imagine flying from New York to Tokyo in four hours instead of 15 hours.”

Conventional airplanes are composed of a tube-shaped fuselage with two wings inserted and are symmetric along the longitudinal axis. Such a fuselage is designed to hold passengers and cargo, with lift being generated by the wings. “Hence, a conventional airplane is not very efficient and generates a strong sonic boom,” says Zha.

The SBiDir-FW platform is symmetric along both the longitudinal and span axes. It is a flying wing that generates lift everywhere and is able to rotate 90 degrees during flight between supersonic and subsonic speeds, explains Zha.

“No matter how fast a supersonic plane can fly, it needs to take off and land at very low speed, which severely hurts the high-speed supersonic performance for a conventional airplane,” said Zha. “The SBiDir-FW removes this performance conflict by rotating the airplane to fly in two different directions at subsonic and supersonic. Such rotation enables the SBiDir-FW to achieve superior performance at both supersonic and subsonic speeds.”

Innovative Advanced Concepts awards enable scientists to explore basic feasibility and properties of a potential breakthrough concept. The projects were chosen through a peer-review process that evaluated their innovation and how technically viable they are. All are very early in development—20 years or longer from being used on a mission.

Louis Cattafesta, professor of aerospace engineering at Florida State University, and Farrukh Alvi, professor and director of the Florida Center for Advanced Aero-Propulsion at FSU, are also working on the SBiDir-FW.

Contacts and sources:
University of Miami
on September 29, 2014 No comments: