An artist’s illustration of a white dwarf star (the stretched object right of centre) being dragged on to a neutron star (bottom centre). At the top left is the galaxy where the pair originated and other more distant galaxies can be seen elsewhere in the image. 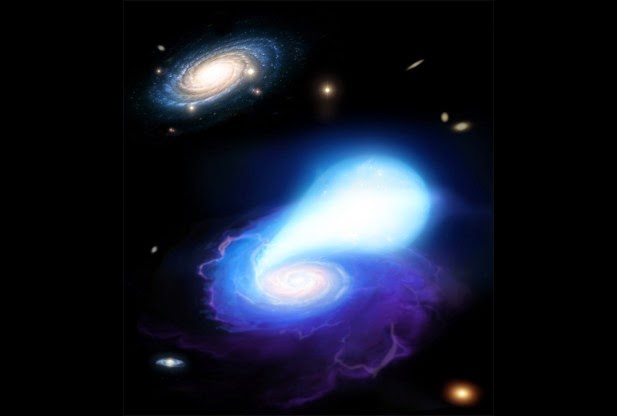 Our paper examines so-called 'calcium-rich' transients" says Dr Lyman. "These are luminous explosions that last on the timescales of weeks, however, they're not as bright and don't last as long as traditional supernovae, which makes them difficult to discover and study in detail."

Previous studies had shown that calcium comprised up to half of the material thrown off in such explosions compared to only a tiny fraction in normal supernovae. This means that these curious events may actually be the dominant producers of calcium in our universe.

"One of the weirdest aspects is that they seem to explode in unusual places. For example, if you look at a galaxy, you expect any explosions to roughly be in line with the underlying light you see from that galaxy, since that is where the stars are" comments Dr Lyman. "However, a large fraction of these are exploding at huge distances from their galaxies, where the number of stellar systems is miniscule.

"What we address in the paper is whether there are any systems underneath where these transients have exploded, for example there could be very faint dwarf galaxies there, explaining the weird locations. We present observations, going just about as faint as you can go, to show there is in fact nothing at the location of these transients - so the question becomes, how did they get there?"

The researchers used the Very Large Telescope in Chile and Hubble Space Telescope observations of the nearest examples of these calcium rich transients to attempt to detect anything left behind or in the surrounding area of the explosion.

The deep observations taken allowed them to rule out the presence of faint dwarf galaxies or globular star clusters at the locations of these nearest examples. Furthermore, an explanation for core-collapse supernovae, which calcium-rich transients resemble, although fainter, is the collapse of a massive star in a binary system where material is stripped from the massive star undergoing collapse. The researchers found no evidence for a surviving binary companion or other massive stars in the vicinity, allowing them to reject massive stars as the progenitors of calcium rich transients.

Professor Andrew Levan from the University of Warwick’s Department of Physics and a researcher on the paper said: "It was increasingly looking like hypervelocity massive stars could not explain the locations of these supernovae. They must be lower mass longer lived stars, but still in some sort of binary systems as there is no known way that a single low mass star can go supernova by itself, or create an event that would look like a supernova."

The researchers then compared their data to what is known about short-duration gamma ray bursts (SGRBs). These are also often seen to explode in remote locations with no coincident galaxy detected. SGRBs are understood to occur when two neutron stars collide, or when a neutron star merges with a black hole – this has been backed up by the detection of a 'kilonova' accompanying a SGRB thanks to work led by Professor Nial Tanvir, a collaborator on this study.

Although neutron star and black hole mergers would not explain these brighter calcium rich transients, the research team considered that if the collision was instead between a white dwarf star and neutron star, it would fit their observations and analysis because:
It would provide enough energy to generate the luminosity of calcium rich transients.
The presence of a white dwarf would provide a mechanism to produce calcium rich material.
The presence of the Neutron star could explain why this binary star system was found so far from a host galaxy.

The researchers note that such merging systems of white dwarfs and neutron stars are postulated to produce high energy gamma-ray bursts, motivating further observations of any new examples of calcium rich transients to confirm this. Additionally, such merging systems will contribute significant sources of gravitational waves, potentially detectable by upcoming experiments that will shed further light on the nature of these exotic systems.