What Lit Up The Universe

New research from UCL shows we will soon uncover the origin of the ultraviolet light that bathes the cosmos, helping scientists understand how galaxies were built.

A computer model shows one scenario for how light is spread through the early universe on vast scales (more than 50 million light years across). Astronomers will soon know whether or not these kinds of computer models give an accurate portrayal of light in the real cosmos. 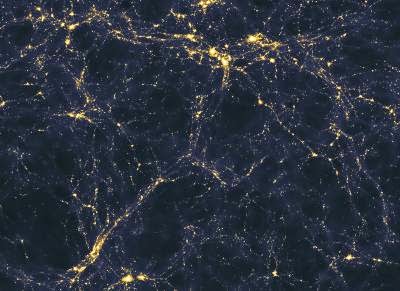 The study published today in The Astrophysical Journal Letters by UCL cosmologists Dr Andrew Pontzen and Dr Hiranya Peiris (both UCL Physics & Astronomy), together with collaborators at Princeton and Barcelona Universities, shows how forthcoming astronomical surveys will reveal what lit up the cosmos.

"Which produces more light? A country's biggest cities or its many tiny towns?" asked Dr Pontzen, lead author of the study. "Cities are brighter, but towns are far more numerous. Understanding the balance would tell you something about the organisation of the country. We're posing a similar question about the universe: does ultraviolet light come from numerous but faint galaxies, or from a smaller number of quasars?"

Quasars are the brightest objects in the Universe; their intense light is generated by gas as it falls towards a black hole. Galaxies can contain millions or billions of stars, but are still dim by comparison. Understanding whether the numerous small galaxies outshine the rare, bright quasars will provide insight into the way the universe built up today's populations of stars and planets. It will also help scientists properly calibrate their measurements of dark energy, the agent thought to be accelerating the universe's expansion and determining its far future.

The new method proposed by the team builds on a technique already used by astronomers in which quasars act as beacons to understand space. The intense light from quasars makes them easy to spot even at extreme distances, up to 95% of the way across the observable universe. The team think that studying how this light interacts with hydrogen gas on its journey to Earth will reveal the main sources of illumination in the universe, even if those sources are not themselves quasars.

Two types of hydrogen gas are found in the universe – a plain, neutral form and a second charged form which results from bombardment by UV light. These two forms can be distinguished by studying a particular wavelength of light called 'Lyman-alpha' which is only absorbed by the neutral type of hydrogen. Scientists can see where in the universe this 'Lyman-alpha' light has been absorbed to map the neutral hydrogen.

Since the quasars being studied are billions of light years away, they act as a time capsule: looking at the light shows us what the universe looked like in the distant past. The resulting map will reveal where neutral hydrogen was located billions of years ago as the universe was vigorously building its galaxies.

An even distribution of neutral hydrogen gas would suggest numerous galaxies as the source of most light, whereas a much less uniform pattern, showing a patchwork of charged and neutral hydrogen gas, would indicate that rare quasars were the primary origin of light.

Current samples of quasars aren't quite big enough for a robust analysis of the differences between the two scenarios; however, a number of surveys currently being planned should help scientists find the answer.

Chief among these is the DESI (Dark Energy Spectroscopic Instrument) survey which will include detailed measurements of about a million distant quasars. Although these measurements are designed to reveal how the expansion of the universe is accelerating due to dark energy, the new research shows that results from DESI will also determine whether the intervening gas is uniformly illuminated. In turn, the measurement of patchiness will reveal whether light in our universe is generated by 'a few cities' (quasars) or by 'many small towns' (galaxies).

Co-author Dr Hiranya Peiris, said: "It's amazing how little is known about the objects that bathed the universe in ultraviolet radiation while galaxies assembled into their present form. This technique gives us a novel handle on the intergalactic environment during this critical time in the universe's history."

Dr Pontzen, said: "It's good news all round. DESI is going to give us invaluable information about what was going on in early galaxies, objects that are so faint and distant we would never see them individually. And once that's understood in the data, the team can take account of it and still get accurate measurements of how the universe is expanding, telling us about dark energy. It illustrates how these big, ambitious projects are going to deliver astonishingly rich maps to explore. We're now working to understand what other unexpected bonuses might be pulled out from the data."