Since 2006, when NASA's Stardust spacecraft delivered its aerogel and aluminum foil dust collectors to Earth, a team of scientists has combed through the collectors in search of rare, microscopic particles of interstellar dust.

The team now reports that they have found seven dust motes that probably came from outside our solar system, perhaps created in a supernova explosion millions of years ago and altered by eons of exposure to the extremes of space. They would be the first confirmed samples of contemporary interstellar dust. 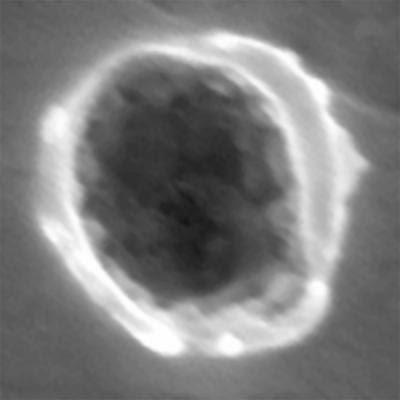 "They are very precious particles," said Andrew Westphal, a physicist at the University of California, Berkeley's Space Sciences Laboratory and the lead author – with 65 main coauthors – of a report on the particles appearing in the Aug. 15 issue of the journal Science. Twelve other papers about the particles are now available online and will appear next week in the journalMeteoritics & Planetary Science.

Westphal cautioned that additional tests must still be done before the team can say definitively that these are pieces of debris from interstellar space. But if they are, the particles could help explain the origin and evolution of interstellar dust that until now could only be guessed from astronomical observations.

Specifically, these particles are much more diverse in terms of chemical composition and structure than previously thought; the small ones are much different from the big ones, and may have had different histories; and many of the big ones have a fluffy structure, like a snowflake, he said.

"The fact that the two largest fluffy particles have crystalline material – a magnesium-iron-silicate mineral called olivine – may imply that these are particles that came from the disks around other stars and were modified in the interstellar medium," he added. "We seem to be getting our first glimpse of the surprising diversity of interstellar dust particles, which is impossible to explore through astronomical observations alone."

Needles in a Haystack

Two particles, each only about two microns (thousandths of a millimeter) in diameter, were isolated from the light, fluffy aerogel detectors after their tracks were discovered by volunteers calling themselves "Dusters" who scanned more than a million images through Stardust@home, a UC Berkeley citizen-science project that proved critical to finding these needles in a haystack. A third track was made by a particle coming from the right direction – the flow of the interstellar wind – but apparently was going so fast, more than 15 kilometers per second (10 miles per second), that it vaporized. Another 29 tracks discovered by volunteers were determined to have been kicked out of the spacecraft into the collectors.

An additional 100 tracks found by Dusters have yet to be analyzed, and only 77 of the 132 aerogel panels have been scanned to date. Westphal expects to find no more than a dozen particles of interstellar dust in all – a millionth the amount of cometary material picked up by other collectors that were on board Stardust.

Four of the particles reported in Science were found in aluminum foils located between aerogel tiles on the collector tray. Although the foils were not originally planned as collection surfaces, an international team led by physicist and nanoastronomer Rhonda Stroud of the Naval Research Laboratory searched the foils for the smallest grains that might be captured, too tiny to image in the aerogel. The team identified four pits lined with partially melted material composed of elements that fit the profile of interstellar dust particles.

"They were splatted a bit, but the majority of the particles were still there at the bottom of the crater," said Stroud. "Their diversity was a surprise, but also these fluffy particles, sort of like a tossed salad, were complex, an agglomeration of other particles, rather than one dense particle suggested by the simplest models of interstellar particles."

Three of these particles, just a few tenths of a micron across, also contained sulfur compounds which some astronomers have argued do not occur in interstellar dust particles. Stroud and other members of the preliminary examination team plan to continue analysis of the remaining 95 percent of the foils, in hopes of finding enough particles to understand the variety and origins of interstellar dust.

The two aerogel-embedded particles – dubbed Orion and Hylabrook by their Duster discoverers and paper coauthors – are destined for further tests to determine their oxygen isotope abundances, which could provide even stronger evidence for an extrasolar origin. Supernovas, red giants, and other evolved stars produce interstellar dust and generate heavy elements like carbon, nitrogen and oxygen that are necessary for life.

Stardust was launched in 1999 to fly through the coma of comet Wild-2 and capture cometary dust with aerogel tiles and aluminum foils mounted on the front of a two-sided collector. Collectors mounted on the rear were designed to catch particles from the "snowstorm of interstellar dust streaming through the galaxy," said UC Berkeley research physicist Anna Butterworth.

"This dust is relatively new, since the lifetime of interstellar dust is only 50 to 100 million years, so we are sampling our contemporary galaxy," said Butterworth.

The separate comet and interstellar dust collectors, each a tennis-racket sized mosaic of 132 aerogel tiles, were dropped by parachute as Stardust flew by Earth in 2006, and a consortium of scientists led by Westphal began to analyze the interstellar collectors. Scientists at the Johnson Space Center in Houston have scanned half the panels at various depths through the transparent aerogel and turned these scans into movies. Westphal and his team tailored the movies for their virtual microscope, allowing Dusters,714 are coauthors of the Science paper – to go online and search for tracks as if focusing a microscope at different depths.

"We expected to find grains less than a micron across that would leave a track a couple of microns wide. That is about one-fiftieth the width of a human hair. We might not see the particles in an optical microscope, so the Dusters are looking for the impact tracks they made," Butterworth said.

Thirty-one of these were extracted along with surrounding aerogel by scientists at Johnson Space Center and shipped to UC Berkeley to be analyzed by a scanning transmission x-ray microscope, or STXM, attached to a synchrotron beam line at the Advanced Light Source at Lawrence Berkeley National Laboratory. STXM used soft x-rays to probe the chemical composition, and ruled out 29 grains because they contained aluminum metal, which does not occur in space, or other substances probably knocked out of the spacecraft and embedded in the aerogel.

Stardust@home will continue to analyze the remaining detector aerogel tiles once Phase 7 starts on Aug. 15. Foil analysis will also be incorporated into the project soon.

"As one of the first citizen-science projects, Stardust@home has been an amazing success," said Butterworth, who is first author of one of the 12 MAPS papers about the project. "If we had had one person searching the aerogel 40 hours per week, they would have taken three years to cover once the same area searched multiple times by the Dusters."

The Stardust analysis was funded primarily by NASA, with additional resources from the Department of Energy.