Injuries, birth defects (such as cleft palates) or surgery to remove a tumor can create gaps in bone that are too large to heal naturally. And when they occur in the head, face or jaw, these bone defects can dramatically alter a person’s appearance.

Researchers reported that they have developed a “self-fitting” material that expands with warm salt water to precisely fill bone defects, and also acts as a scaffold for new bone growth.

A new material that changes shape upon heating could help heal bone lesions caused by injuries, tumor removal or birth defects, such as cleft palates. (The white bar is 1 cm, or less than half an inch long.) 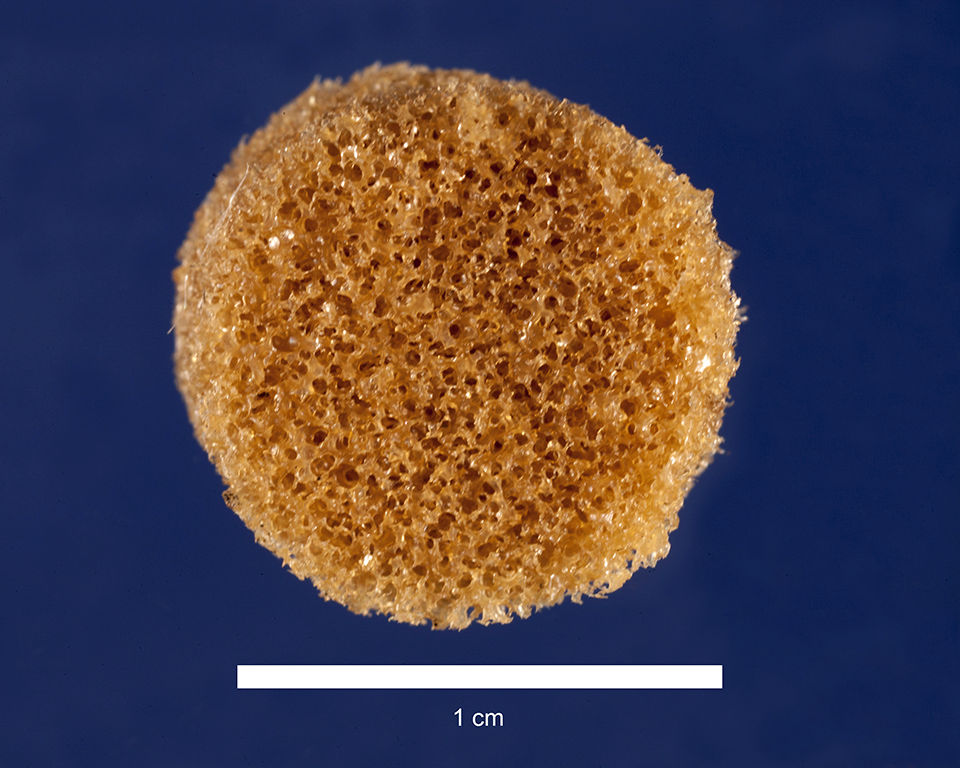 The team will describe their approach in one of nearly 12,000 presentations at the 248thNational Meeting & Exposition of the American Chemical Society (ACS), the world’s largest scientific society, taking place here through Thursday.

Currently, the most common method for filling bone defects in the head, face or jaw (known as the cranio-maxillofacial area) is autografting. That is a process in which surgeons harvest bone from elsewhere in the body, such as the hip bone, and then try to shape it to fit the bone defect.

“The problem is that the autograft is a rigid material that is very difficult to shape into these irregular defects,” says Melissa Grunlan, Ph.D., leader of the study. Also, harvesting bone for the autograft can itself create complications at the place where the bone was taken.

Another approach is to use bone putty or cement to plug gaps. However, these materials aren’t ideal. They become very brittle when they harden, and they lack pores, or small holes, that would allow new bone cells to move in and rebuild the damaged tissue.

To develop a better material, Grunlan and her colleagues at Texas A&M University made a shape-memory polymer (SMP) that molds itself precisely to the shape of the bone defect without being brittle. It also supports the growth of new bone tissue.

SMPs are materials whose geometry changes in response to heat. The team made a porous SMP foam by linking together molecules of poly(ε-caprolactone), an elastic, biodegradable substance that is already used in some medical implants. The resulting material resembled a stiff sponge, with many interconnected pores to allow bone cells to migrate in and grow.

Upon heating to 140 degrees Fahrenheit, the SMP becomes very soft and malleable. So, during surgery to repair a bone defect, a surgeon could warm the SMP to that temperature and fill in the defect with the softened material. Then, as the SMP is cooled to body temperature (98.6 degrees Fahrenheit), it would resume its former stiff texture and “lock” into place.

The researchers also coated the SMPs with polydopamine, a sticky substance that helps lock the polymer into place by inducing formation of a mineral that is found in bone. It may also help osteoblasts, the cells that produce bone, to adhere and spread throughout the polymer. The SMP is biodegradable, so that eventually the scaffold will disappear, leaving only new bone tissue behind.

To test whether the SMP scaffold could support bone cell growth, the researchers seeded the polymer with human osteoblasts. After three days, the polydopamine-coated SMPs had grown about five times more osteoblasts than those without a coating. Furthermore, the osteoblasts produced more of the two proteins, runX2 and osteopontin, that are critical for new bone formation.

Grunlan says that the next step will be to test the SMP’s ability to heal cranio-maxillofacial bone defects in animals. “The work we’ve done in vitro is very encouraging,” she says. “Now we’d like to move this into preclinical and, hopefully, clinical studies.”