The existence of a 'quantum Cheshire Cat', theoretically predicted last year by Professor Sandu Popescu of the University of Bristol and colleagues, has been observed experimentally by a team in Vienna.

In an interferometer, an object can be separated from one of its properties, like a cat and its grin moving on different paths 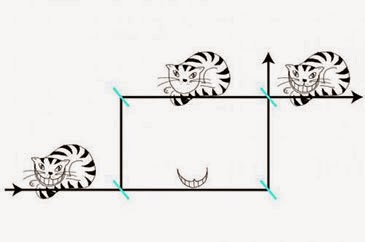 “Well! I’ve often seen a cat without a grin,” thought Alice, "but a grin without a cat! It’s the most curious thing I ever saw in my life!" No wonder Alice is surprised. In real life, assuming that cats do indeed grin, the grin is a property of the cat – it makes no sense to think of a grin without a cat. And this goes for almost all physical properties.

Yet such an effect is precisely what a team of scientists includingProfessor Sandu Popescu of Bristol's School of Physics discovered last year and described in a paper in the New Journal of Physics.

Very much like the grin without a cat in the famous scene in Alice's Adventures in Wonderland, they showed that properties of microscopic particles (such as the charge of an electron) can be disembodied from the particle to which they belong.

This month, a group of scientists from Vienna, publishing in Nature Communications, confirmed experimentally this theoretical prediction. Working with neutrons from the neutron beam at the nuclear reactor in Grenoble, France, they were able to disembody the spin from a neutron. A little piece of Wonderland thus became reality.