NASA's Voyager 2 spacecraft gave humanity its first glimpse of Neptune and its moon Triton in the summer of 1989. Like an old film, Voyager’s historic footage of Triton has been “restored” and used to construct the best-ever global color map of that strange moon.

The Voyager 2 spacecraft flew by Triton, a moon of Neptune, in the summer of 1989. Paul Schenk, a scientist at the Lunar and Planetary Institute in Houston, used Voyager data to construct the best-ever global color map of Triton. This map has a resolution of 1,970 feet (600 meters) per pixel. 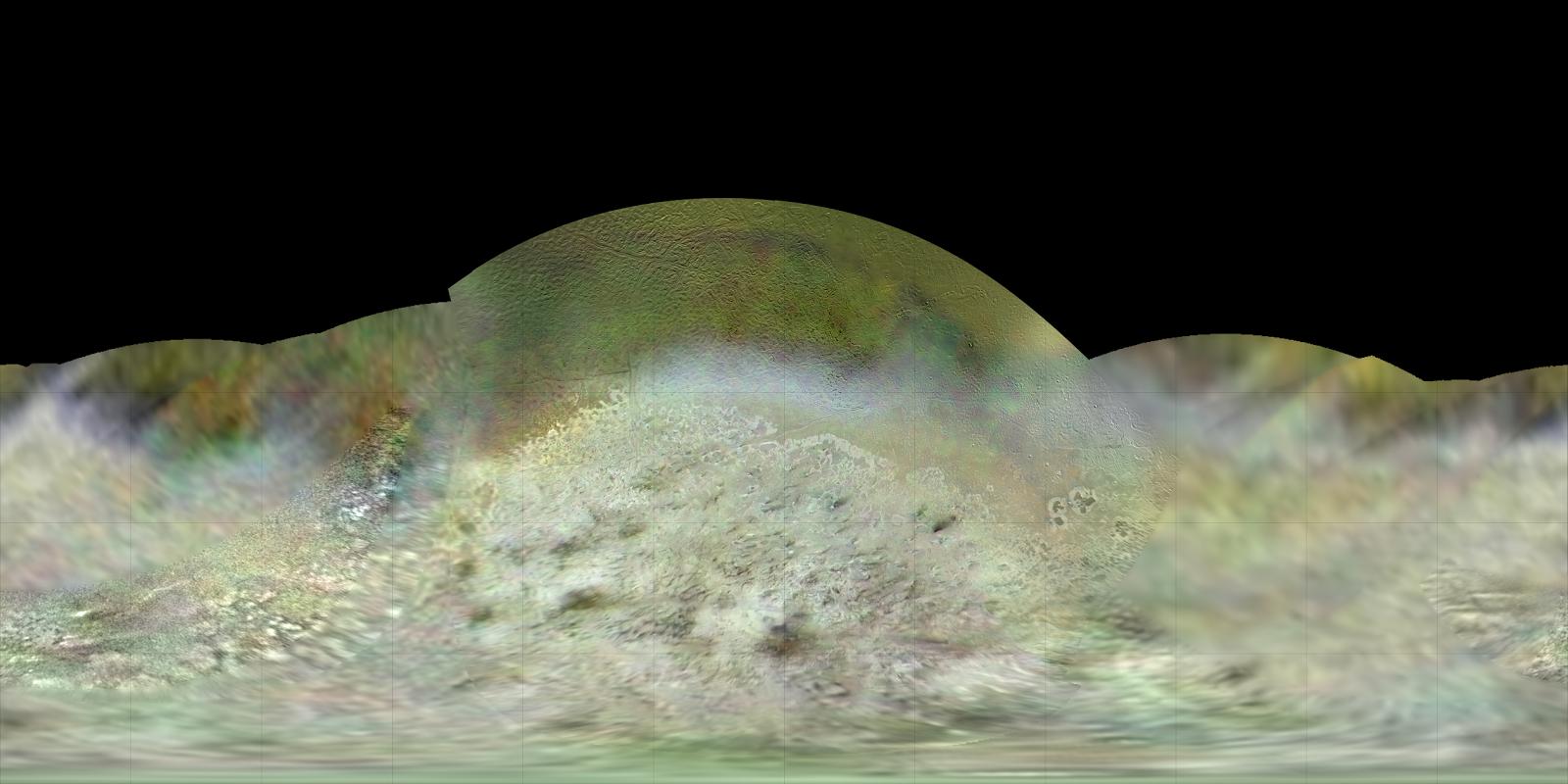 
The map, produced by Paul Schenk, a scientist at the Lunar and Planetary Institute in Houston, has also been used to make a movie recreating that historic Voyager encounter, which took place 25 years ago, on August 25, 1989.

The new Triton map has a resolution of 1,970 feet (600 meters) per pixel. The colors have been enhanced to bring out contrast but are a close approximation to Triton’s natural colors. Voyager’s “eyes” saw in colors slightly different from human eyes, and this map was produced using orange, green and blue filter images.

The Voyager 2 spacecraft flew by Triton, a moon of Neptune, on August 25, 1989. Paul Schenk, a scientist at the Lunar and Planetary Institute in Houston, used Voyager data to construct this video recreating that exciting encounter.

In 1989, most of the northern hemisphere was in darkness and unseen by Voyager. Because of the speed of Voyager's visit and the slow rotation of Triton, only one hemisphere was seen clearly at close distance. The rest of the surface was either in darkness or seen as blurry markings. 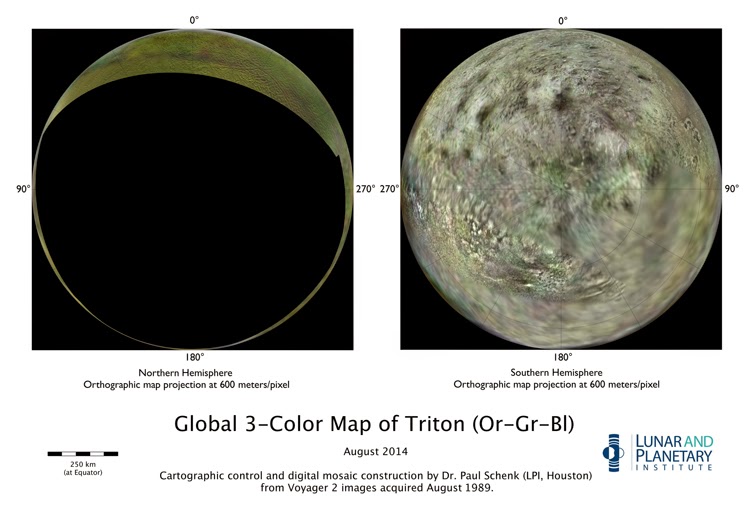 The production of the new Triton map was inspired by anticipation of NASA's New Horizons encounter with Pluto, coming up a little under a year from now. Among the improvements on the map are updates to the accuracy of feature locations, sharpening of feature details by removing some of the blurring effects of the camera, and improved color processing.

Although Triton is a moon of a planet and Pluto is a dwarf planet, Triton serves as a preview of sorts for the upcoming Pluto encounter. Although both bodies originated in the outer solar system, Triton was captured by Neptune and has undergone a radically different thermal history than Pluto. Tidal heating has likely melted the interior of Triton, producing the volcanoes, fractures and other geological features that Voyager saw on that bitterly cold, icy surface.

Pluto is unlikely to be a copy of Triton, but some of the same types of features may be present. Triton is slightly larger than Pluto, has a very similar internal density and bulk composition, and has the same low-temperature volatiles frozen on its surface. The surface composition of both bodies includes carbon monoxide, carbon dioxide, methane and nitrogen ices.

Voyager also discovered atmospheric plumes on Triton, making it one of the known active bodies in the outer solar system, along with objects such as Jupiter's moon Io and Saturn's moon Enceladus. Scientists will be looking at Pluto next year to see if it will join this list. They will also be looking to see how Pluto and Triton compare and contrast, and how their different histories have shaped the surfaces we see.

Although a fast flyby, New Horizons' Pluto encounter on July 14, 2015, will not be a replay of Voyager but more of a sequel and a reboot, with a new and more technologically advanced spacecraft and, more importantly, a new cast of characters. Those characters are Pluto and its family of five known moons, all of which will be seen up close for the first time next summer.

Triton may not be a perfect preview of coming attractions, but it serves as a prequel to the cosmic blockbuster expected when New Horizons arrives at Pluto next year.

In another historic milestone for the Voyager mission, Aug. 25 also marks the two-year anniversary of Voyager 1 reaching interstellar space.