Biological effects of Fukushima radiation on plants, insects, and animals detailed in new series of articles.

Following the 1986 Chernobyl nuclear power plant meltdown, biological samples were obtained only after extensive delays, limiting the information that could be gained about the impacts of that historic disaster. Determined not to repeat the shortcomings of the Chernobyl studies, scientists began gathering biological information only a few months after the disastrous meltdown of the Fukushima Daiichi power plant in Japan in 2011. Results of these studies are now beginning to reveal serious biological effects of the Fukushima radiation on non-human organisms ranging from plants to butterflies to birds.

This is a pale grass blue butterfly, one of the most common species of butterfly in Japan. Recent research has revealed major impacts on this species from the radiation leaks at the Fukushima nuclear power plant. 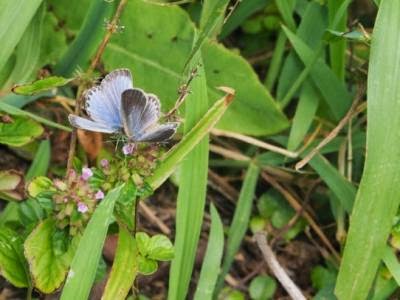 A series of articles summarizing these studies has now been published in the Journal of Heredity. These describe widespread impacts, ranging from population declines to genetic damage to responses by the repair mechanisms that help organisms cope with radiation exposure.

"A growing body of empirical results from studies of birds, monkeys, butterflies, and other insects suggests that some species have been significantly impacted by the radioactive releases related to the Fukushima disaster," stated Dr. Timothy Mousseau of the University of South Carolina, lead author of one of the studies.

Most importantly, these studies supply a baseline for future research on the effects of ionizing radiation exposure to the environment.

Common to all of the published studies is the hypothesis that chronic (low-dose) exposure to ionizing radiation results in genetic damage and increased mutation rates in reproductive and non-reproductive cells.

One of the studies (Hayashi et al. 2014) documented the effects of radiation on rice by exposing healthy seedlings to low-level gamma radiation at a contaminated site in Fukushima Prefecture. After three days, a number of effects were observed, including activation of genes involved in self-defense, ranging from DNA replication and repair to stress responses to cell death.

"The experimental design employed in this work will provide a new way to test how the entire rice plant genome responds to ionizing radiation under field conditions," explained Dr. Randeep Rakwal of the University of Tsukuba in Japan, one of the authors of the study.

Another team of researchers (Taira et al. 2014) examined the response of the pale grass blue butterfly, one of the most common butterfly species in Japan, to radiation exposure at the Fukushima site. They found size reduction, slowed growth, high mortality and morphological abnormality both at the Fukushima site and among laboratory-bred butterflies with parents collected from the contaminated site.

Multiple sources of exposure were included in the butterfly study. "Non-contaminated larvae fed leaves from contaminated host plants collected near the reactor showed high rates of abnormality and mortality," explained Dr. Joji Otaki of the University of the Ryukyus in Okinawa, Japan. Some of their results suggested the possible evolution of radiation resistance in Fukushima butterflies as well.

A review of genetic and ecological studies for a range of other species at both Chernobyl and Fukushima (Mousseau 2014) revealed significant consequences of radiation. Population censuses of birds, butterflies, and cicadas at Fukushima showed major declines attributable to radiation exposure. Morphological effects, such as aberrant feathers on barn swallows, were also observed. The authors suggest that long-term studies at Chernobyl could predict likely effects in the future at the Fukushima site.

All of these studies highlight the need for early and ongoing monitoring at sites of accidental radiation release. "Detailed analyses of genetic impacts to natural populations could provide the information needed to predict recovery times for wild communities at Fukushima as well as any sites of future nuclear accidents," Mousseau said. "There is an urgent need for greater investment in basic scientific research of the wild animals and plants of Fukushima."