Scientists hunting for life beyond Earth have discovered more than 1,800 planets outside our solar system, or exoplanets, in recent years, but so far, no one has been able to confirm an exomoon. Now, physicists from The University of Texas at Arlington believe following a trail of radio wave emissions may lead them to that discovery.

Schematic of a plasma torus around an exoplanet, which is created by the ions injected from an exomoon's ionosphere into the planet's magnetosphere.

Their recent findings, published in the Aug. 10 issue of The Astrophysical Journal, describe radio wave emissions that result from the interaction between Jupiter’s magnetic field and its moon Io. They suggest using detailed calculations about the Jupiter/Io dynamic to look for radio emissions that could indicate moons orbiting an exoplanet.

“This is a new way of looking at these things,” said Zdzislaw Musielak, professor of physics in the UT Arlington College of Science and co-author of the new paper. “We said, ‘What if this mechanism happens outside of our solar system?’ Then, we did the calculations and they show that actually there are some star systems that if they have moons, it could be discovered in this way.”

The habitable zone (green), where liquid water can exist, is farther from hot stars than cooler ones. 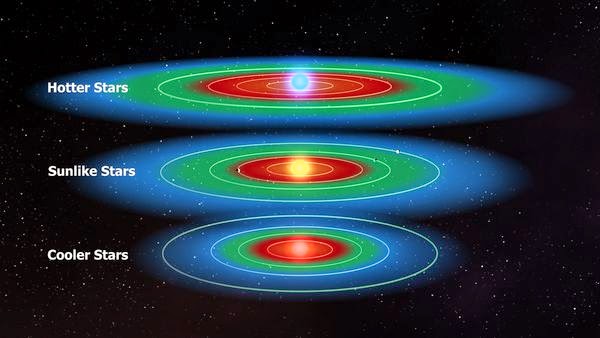 
The idea of life thriving on a moon has inspired science fiction, such as Star Wars’ furry Ewoks. Scientists even think some moons in our own Solar System ‑ Saturn’s Enceladus and Jupiter’s Europa ‑ are good candidates for supporting life based on their atmospheric composition, potential for water and distance from the sun.

The difficulty comes in trying to spot an exomoon using existing methods, Musielak said. NASA’s Kepler telescope, for example, measures changes in brightness from a star to identify transits, or passes, by an orbiting planet. Reliably isolating whether a moon is part of that transit hasn’t been possible, so far.

The UT Arlington team builds on earlier theories about using radio wave observations to discover exoplanets, but applies it in a new way. Their focus is on Io and its ionosphere, a charged upper atmosphere that is likely created by the moon’s extremely active volcanoes.

During its orbit, Io’s ionosphere interacts with Jupiter’s magnetosphere, a layer of charged plasma that protects the planet from radiation, to create a frictional current that causes radio wave emissions. These are called “Io-controlled decametric emissions” and the researchers believe finding similar emissions near known exoplanets could be key to predicting where other moons exist.

Noyola said it is important to note when modeling the Io example to other planet/moon pairs that other moons do not necessarily have to have the volcanic activity of Io to have an ionosphere.

“Larger moons – such as Saturn’s largest moon, Titan - can sustain a thick atmosphere, and that could also mean they have an ionosphere. So volcanic activity isn’t a requirement,” Noyola said.

The paper also addresses Alfvén waves that are produced by the Io and Jupiter magnetosphere interaction and says those waves also could be used to spot exomoons in similar situations. Alfvén waves are the rippling of the plasma in a magnetic field, first described by Hannes Alfvén in the early 1940s.

In their paper, the UT Arlington team even pinpointed two exoplanets where they are “cautiously optimistic” that the observational community could apply the study’s calculations to search for exomoons the size of our moon with future, more sensitive radio telescopes – Gliese 876b, which is about 15 light years way, and Epsilon Eridani b, which is about 10.5 light years away. Current telescopes – such as the National Science Foundation-supported Long Wavelength Array – could be used to detect exomoons in closer planetary systems, with the bigger moons holding better the possibilities of detection, Satyal said.

“Most of the detected exoplanets are gas giants, many of which are in the habitable zone,” he said. “These gas giants cannot support life, but it is believed that the exomoons orbiting these planets could still be habitable.”

Traci Peterson
University of Texas at Arlington
on August 12, 2014