New supercomputing calculations provide the first evidence that particles predicted by the theory of quark-gluon interactions but never before observed are being produced in heavy-ion collisions at the Relativistic Heavy Ion Collider (RHIC), a facility that is dedicated to studying nuclear physics. 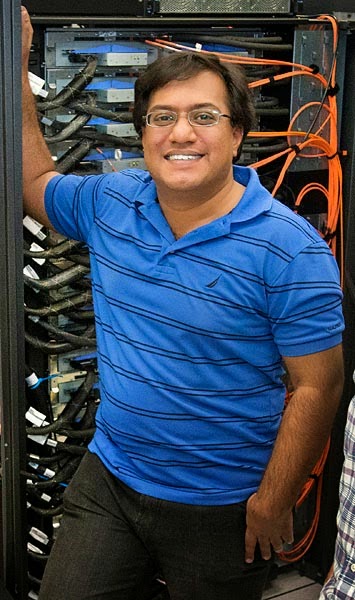 These heavy strange baryons, containing at least one strange quark, still cannot be observed directly, but instead make their presence known by lowering the temperature at which other strange baryons "freeze out" from the quark-gluon plasma (QGP) discovered and created at RHIC, a U.S. Department of Energy (DOE) Office of Science user facility located at DOE's Brookhaven National Laboratory.

RHIC is one of just two places in the world where scientists can create and study a primordial soup of unbound quarks and gluons—akin to what existed in the early universe some 14 billion years ago. The research is helping to unravel how these building blocks of matter became bound into hadrons, particles composed of two or three quarks held together by gluons, the carriers of nature's strongest force.

Added Berndt Mueller, Associate Laboratory Director for Nuclear and Particle Physics at Brookhaven, "This finding is particularly remarkable because strange quarks were one of the early signatures of the formation of the primordial quark-gluon plasma. Now we're using this QGP signature as a tool to discover previously unknown baryons that emerge from the QGP and could not be produced otherwise."

"Baryons, which are hadrons made of three quarks, make up almost all the matter we see in the universe today," said Brookhaven theoretical physicist Swagato Mukherjee, a co-author on a paper describing the new results in Physical Review Letters.

"The theory that tells us how this matter forms—including the protons and neutrons that make up the nuclei of atoms—also predicts the existence of many different baryons, including some that are very heavy and short-lived, containing one or more heavy 'strange' quarks. Now we have indirect evidence from our calculations and comparisons with experimental data at RHIC that these predicted higher mass states of strange baryons do exist," he said.

The evidence comes from an effect on the thermodynamic properties of the matter nuclear physicists can detect coming out of collisions at RHIC. Specifically, the scientists observe certain more-common strange baryons (omega baryons, cascade baryons, lambda baryons) "freezing out" of RHIC's quark-gluon plasma at a lower temperature than would be expected if the predicted extra-heavy strange baryons didn't exist.

"It's similar to the way table salt lowers the freezing point of liquid water," said Mukherjee. "These 'invisible' hadrons are like salt molecules floating around in the hot gas of hadrons, making other particles freeze out at a lower temperature than they would if the 'salt' wasn't there."

To see the evidence, the scientists performed calculations using lattice QCD, a technique that uses points on an imaginary four-dimensional lattice (three spatial dimensions plus time) to represent the positions of quarks and gluons, and complex mathematical equations to calculate interactions among them, as described by the theory of quantum chromodynamics (QCD).

"The calculations tell you where you have bound or unbound quarks, depending on the temperature," Mukherjee said.

The scientists were specifically looking for fluctuations of conserved baryon number and strangeness and exploring how the calculations fit with the observed RHIC measurements at a wide range of energies.

The calculations show that inclusion of the predicted but "experimentally uncharted" strange baryons fit better with the data, providing the first evidence that these so-far unobserved particles exist and exert their effect on the freeze-out temperature of the observable particles.

These findings are helping physicists quantitatively plot the points on the phase diagram that maps out the different phases of nuclear matter, including hadrons and quark-gluon plasma, and the transitions between them under various conditions of temperature and density.

"To accurately plot points on the phase diagram, you have to know what the contents are on the bound-state, hadron side of the transition line—even if you haven't seen them," Mukherjee said. "We've found that the higher mass states of strange baryons affect the production of ground states that we can observe. And the line where we see the ordinary matter moves to a lower temperature because of the multitude of higher states that we can't see."

The research was carried out by the Brookhaven Lab's Lattice Gauge Theory group, led by Frithjof Karsch, in collaboration with scientists from Bielefeld University, Germany, and Central China Normal University. The supercomputing calculations were performed using GPU-clusters at DOE's Thomas Jefferson National Accelerator Facility (Jefferson Lab), Bielefeld University, Paderborn University, and Indiana University with funding from the Scientific Discovery through Advanced Computing (SciDAC) program of the DOE Office of Science (Nuclear Physics and Advanced Scientific Computing Research), the Federal Ministry of Education and Research of Germany, the German Research Foundation, the European Commission Directorate-General for Research & Innovation and the GSI BILAER grant. The experimental program at RHIC is funded primarily by the DOE Office of Science.

Brookhaven National Laboratory is supported by the Office of Science of the U.S. Department of Energy. The Office of Science is the single largest supporter of basic research in the physical sciences in the United States, and is working to address some of the most pressing challenges of our time. For more information, please visit science.energy.gov.