Dust -- And The Microbes Hitching Rides On It -- Influences Rain, Climate

Dusty air blowing across the Pacific from Asia and Africa plays a critical role in precipitation patterns throughout the drought-stricken western U.S.

A scientist presented new research suggesting that the exact chemical make-up of that dust, including microbes found in it, is the key to how much rain and snow falls from clouds throughout the region. This information could help better predict rain events, as well as explain how air pollution from a variety of sources influences regional climate in general.

Hundreds of millions of tons of dust are picked up from the deserts of Africa and blown across the Atlantic Ocean each year. That dust helps build beaches in the Caribbean and fertilizes soils in the Amazon. It affects air quality in North and South America. And some say dust storms might play a role in the suppression of hurricanes and the decline of coral reefs. 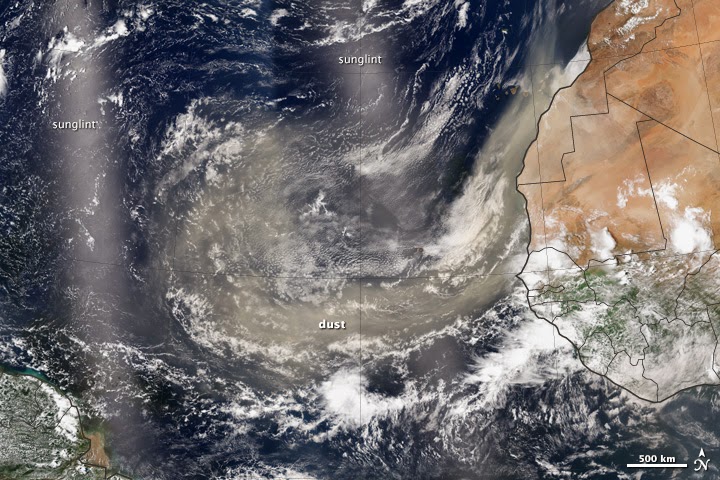 She made a presentation on how aerosols impact clouds and climate at the 248th National Meeting & Exposition of the American Chemical Society (ACS), the world's largest scientific society. The meeting is taking place through Thursday and features nearly 12,000 scientific presentations.

"We've learned that not all of the particles in the air at high altitudes have the same influence on clouds. We're starting to think that these differences contribute to how rain gets distributed," says Kim Prather, Ph.D.

Most of the dust that Prather's team at the University of California, San Diego, detects in clouds and precipitation originates in Asian and Chinese deserts. It gets swept westward by the jet stream where it mixes with a variety of other airborne particles such as sea spray and smoke. Prather says that each of these types of particles — collectively known as aerosols — has its own, distinctive impact on clouds.

A major key to what turns ordinary clouds into rainmakers in the first place is their ability to form ice crystals around the microscopic particles that invade and "seed" them, Prather said. Without ice crystals as a catalyst, rain development inside clouds can be impaired.

"The standard belief is the more ice you have in a cloud, the more likely you will get precipitation out of it," she says. "Our goal is to catch the first stages of ice forming and find out what exactly the chemical constituents are that the ice is forming on."

Prather and her team use special single-particle mass spectrometers, which sample cloud droplets and ice crystals in real-time. The instruments are used aboard research aircraft flying through clouds high above the western seaboard. One of her most recent — and surprising — discoveries is that the material she measures is remarkably loaded with signs of life.

"We're seeing lots of biological components such as bacteria and molecules associated with microbial life," she says. "In fact, many of the species we find in the ice crystals have these biological chemicals and are not simply dust particles."

Prather speculates that the microbes hitch a ride on bits of sand, iron and other debris swept aloft from desert regions. Microbes and biological components could also become mixed with the dust as it is transported across the Pacific. She and her team are eager to learn just how important these bioparticles are in the rainmaking process.

Such research eventually could lead to more accurate weather forecasting and rainfall predictions, she believes. Only recently have some computer weather models begun to use dust data gathered by satellite imagery that captures dust's sweep toward the west coast.

"Long term, our goal is to be able to predict how much precipitation we can expect to form when certain aerosols such as dust are coming toward us," says Prather. "That's a lofty goal but we're making headway."

Another pay-off to her research also could be a way to improve cloud-seeding technology. Since the late 1940s, cloud seeding in certain parts of the continental U.S. has been commonplace, even though results continue to be spotty. Prather says her current research may help identify better ways of seeding clouds based on the natural processes she studies. "It's clear that Mother Nature has developed very effective ways to seed clouds, so perhaps we could take some tips from her."