Researchers at the University of Tennessee, Knoxville, have made a novel discovery that may potentially protect the world from future collisions with asteroids.

The team studied near-Earth asteroid 1950 DA and discovered that the body, which rotates so quickly it defies gravity, is held together by cohesive forces called van der Waals, never detected before on an asteroid. 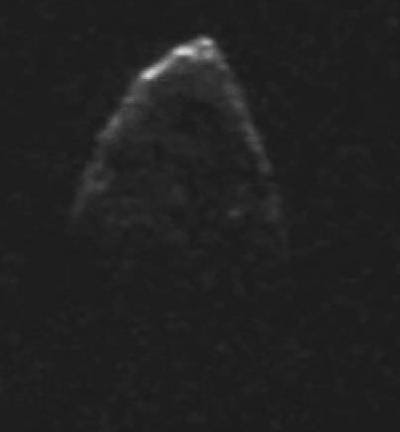 The findings, published in this week's edition of the science journal Nature, have potential implications for defending our planet from a massive asteroid impact.

Previous research has shown that asteroids are loose piles of rubble held together by gravity and friction. However, the UT team found that 1950 DA is spinning so quickly that it defies these forces. Ben Rozitis, a postdoctoral researcher; Eric MacLennan, a doctoral candidate; and Joshua Emery, an assistant professor in the Department of Earth and Planetary Sciences, wanted to know what keeps the body from breaking apart.

Looking at thermal images and orbital drift to calculate thermal inertia and bulk density, the team detected the action of cohesive forces in an environment with little gravity.

"We found that 1950 DA is rotating faster than the breakup limit for its density," said Rozitis. "So if just gravity were holding this rubble pile together, as is generally assumed, it would fly apart. Therefore, interparticle cohesive forces must be holding it together."

In fact, the rotation is so fast that at its equator, 1950 DA effectively experiences negative gravity. If an astronaut were to attempt to stand on this surface, he or she would fly off into space unless he or she were somehow anchored.

The presence of cohesive forces has been predicted in small asteroids, but definitive evidence has never been seen before.

The finding provides important information for efforts aimed at stopping an asteroid from crashing into Earth.

"Following the February 2013 asteroid impact in Chelyabinsk, Russia, there is renewed interest in figuring out how to deal with the potential hazard of an asteroid impact," said Rozitis. "Understanding what holds these asteroids together can inform strategies to guard against future impacts."

This research reveals some potential techniques, such as a kinetic impactor which would deploy a massive object on a collision course with the asteroid, could exacerbate the impact's effects. For example, this technique could destabilize the cohesive forces keeping the asteroid together, causing it to break apart into several threatening asteroids headed for Earth.

This may be what occurred with the asteroid P/2013 R3, which was caught by the Hubble Space Telescope in 2013 and 2014 coming undone, possibly due to a collision with a meteor.

"With such tenuous cohesive forces holding one of these asteroids together, a very small impulse may result in a complete disruption," said Rozitis.

The researchers' findings also have implications for space exploration. For example, the European Space Agency's Rosetta spacecraft landed on Comet 67P/Churyumov-Gerasimenko's surface last week and it may find a dusty surface dominated by such cohesive forces.

Contacts and sources:
Whitney Heins
University of Tennessee at Knoxville
on August 13, 2014