In conjunction with a group of international colleagues, marine biologist Dr. Mona Hoppenrath of the institute “Senckenberg am Meer” in Wilhelmshaven has authored the world’s first field guide covering marine benthic dinoflagellates.

The marine dinoflagellate Gambierdiscus toxicus produces toxins that can be dangerous to humans. 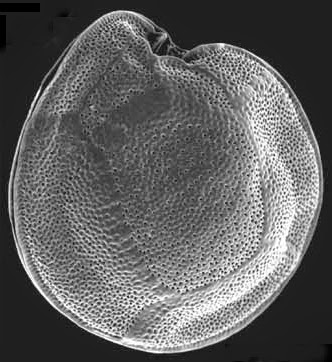 These tiny single-celled organisms have a world-wide distribution and, among others, cause the disease “ciguatera,” the most common type of fish poisoning. The book was published today under the title “Marine benthic dinoflagellates – unveiling their worldwide biodiversity” in the publication series “Kleine Senckenberg Reihe.”

Dinoflagellates live in salt and freshwater habitats around the globe and display highly diverse characteristics. These microscopic single-celled organisms cause waves to glow, play a central role in the aquatic food web and produce toxins that can be dangerous to humans.

“While planktonic dinoflagellates, i.e., those that are suspended in the water, have been studied quite well, the dinoflagellates that live in or on the bottom of the sea have received very little attention to date,” explains Dr. Mona Hoppenrath, scientist at Senckenberg am Meer in Wilhelmshaven and author of the newly published book.

This is particularly surprising since benthic dinoflagellates can pose a concrete danger to humans. Several species may cause the sometimes deadly fish poisoning “ciguatera.” “Ciguatera is the most common type of fish poisoning. It is caused by the toxic substances ciguatoxin and maitotoxin, which in turn are produced by dinoflagellates that live on algae and sea grass, such as Gambierdiscus toxicus,”according to Hoppenrath. Since the toxins become concentrated in the food chain, predatory fishes are particularly contaminated.

However, the new summary does not just cover the approximately 30 species of potentially dangerous dinoflagellates. Hoppenrath and her colleagues list, describe and illustrate a total of 189 species in 45 genera. In addition, they include information about habitats, geographic distribution and ecology.

Diamond-shaped dinoflagellate Peridinium quinquecorne – one of the few species that occur both planktonic and benthic. 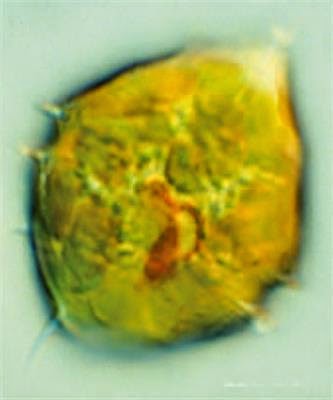 “We actually could begin work on a second edition already,” jokes Hoppenrath, since new species of benthic dinoflagellates are discovered at a steady rate. “We are sure that only a part of these single-celled organisms has been described so far,” adds the marine biologist from Wilhelmshaven.

The book’s authors count among the few experts on this group of organisms. They described more than one third of the currently known benthic species.

“We were especially surprised by the species diversity and by the fact that the benthic dinoflagellates are very different from the planktonic ones.” Taxonomically and systematically, it is difficult to reconcile these two closely related groups – if you describe a species from the sand and then search for a close relative in the ocean current, you will come up empty-handed, and vice-versa.

“It is a unique world down there at the bottom of the sea, and we can’t simply follow the ‘usual scheme,’” explains Hoppenrath.

Cover of the recently published book. For the first time, all benthic marine dinoflagellates are described. 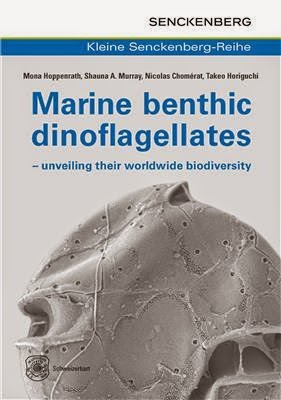 It is difficult to preserve the tiny single-celled creatures in collections – during the preparation process, the cells are frequently damaged or so severely deformed that the main field marks are lost. This lends even more importance to the illustrations and photographs in the new book. Hoppenrath summarizes as follows: “We believe that our work is of interest to scholars and scientists, on the one hand, but it will also serve as a valuable identification aid for ‘practitioners‘ – such as the Federal Environmental Agency (Bundesumweltamt) – in their surveys of dinoflagellates that are dangerous to humans.