Scientists at Brown University’s Center for Capture and Conversion of CO2 have discovered that copper foam could provide a new way of converting excess CO2 into useful industrial chemicals, including formic acid.

Copper is the only metal that can reduce CO2 to useful hydrocarbons. A foam of copper offers sponge-like pores and channels, providing more active sites for CO2 reactions than a simple surface. 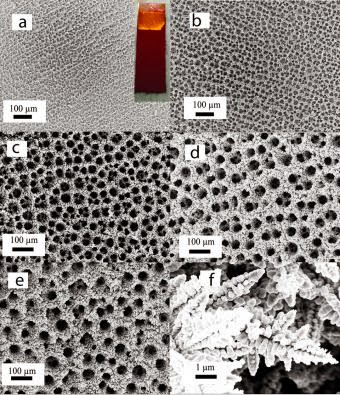 
A catalyst made from a foamy form of copper has vastly different electrochemical properties from catalysts made with smooth copper in reactions involving carbon dioxide, a new study shows. The research, by scientists in Brown University’s Center for the Capture and Conversion of CO2, suggests that copper foams could provide a new way of converting excess CO2 into useful industrial chemicals.

The research is published in the journal ACS Catalysis.

As levels of carbon dioxide in the atmosphere continue to rise, researchers are looking for ways to make use of it. One approach is to capture CO2 emitted from power plants and other facilities and use it as a carbon source to make industrial chemicals, most of which are currently made from fossil fuels. The problem is that CO2 is extremely stable, and reducing it to a reactive and useful form isn’t easy.

“Copper has been studied for a long time as an electrocatalyst for CO2 reduction, and it’s the only metal shown to be able to reduce CO2 to useful hydrocarbons,” said Tayhas Palmore, professor of engineering and senior author of the new research. “There was some indication that if you roughen the surface of planar copper, it would create more active sites for reactions with CO2.”

Copper foam, which has been developed only in the last few years, provided the surface roughness that Palmore and her colleagues were looking for. The foams are made by depositing copper on a surface in the presence of hydrogen and a strong electric current. Hydrogen bubbles cause the copper to be deposited in an arrangement of sponge-like pores and channels of varying sizes.

After depositing copper foams on an electrode, the researchers set up experiments to see what kinds of products would be produced in an electrochemical reaction with CO2 in water. The experiments were performed by Sujat Sen and Dan Liu, graduate students in chemistry working in Palmore’s lab at Brown’s School of Engineering.

The experiments showed that the copper foam converted CO2 into formic acid — a compound often used as a feedstock for microbes that produce biofuels — at a much greater efficiency than planar copper. The reaction also produced small amounts of propylene, a useful hydrocarbon that’s never been reported before in reactions involving copper.

“The product distribution was unique and very different from what had been reported with planar electrodes, which was a surprise,” Palmore said. “We’ve identified another parameter to consider in the electroreduction of CO2. It’s not just the kind of metal that’s responsible for the direction this chemistry goes, but also the architecture of the catalyst.”

Now that it’s clear that architecture matters, Palmore and her colleagues are working to see what happens when that architecture is tweaked. It’s likely, she says, that pores of different depths or diameters will produce different compounds from a CO2 feedstock. Ultimately, it might be possible to tune the copper foam toward a specific desired compound.

Palmore said she’s amazed by the fact that there’s still more to be learned about copper.

“People have studied electrocatalysis with copper for a couple decades now,” she said. “It’s remarkable that we can still make alterations to it that affect what’s produced.”

The work in the study is part of a larger effort by Brown’s Center for the Capture and Conversion of CO2. The Center, funded by the National Science Foundation, is exploring a variety of catalysts that can convert CO2 into usable forms of carbon.

“The goal is to find ways to produce some of the world's largest-volume chemicals from a sustainable carbon source that the Earth not only has in excess but urgently needs to reduce,” said Palmore, who leads the center. “This is a way for us as scientists to begin thinking of how we produce industrial chemicals in more sustainable ways and control costs at the same time. The cost of commodity chemicals is going nowhere but up as long as production is dependent on fossil fuels.”

The Center for Capture and Conversion of CO2 is a Center for Chemical Innovation funded by the National Science Foundation (CHE-1240020).