We live atop the thinnest layer of the Earth: the crust. Below is the mantle (red), outer core (orange), and finally inner core (yellow-white). The lower portion of the mantle is the largest layer – stretching from 400 to 1,800 miles below the surface. Research at Argonne’s Advanced Photon Source recently suggested the makeup of the lower mantle is significantly different from what was previously thought. 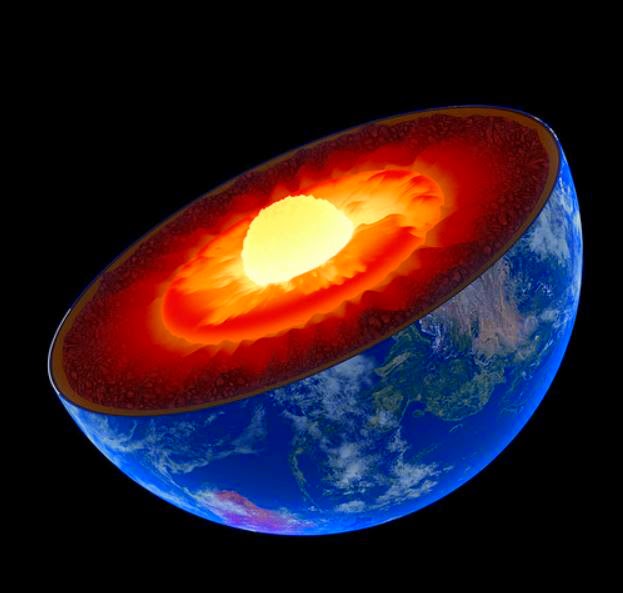 Research published this past June in Science suggested that the makeup of the Earth's lower mantle, which makes up the largest part of the Earth by volume, is significantly different than previously thought.

The work, performed at the Advanced Photon Source at the U.S. Department of Energy’s Argonne National Laboratory, will have a significant impact on our understanding of the lower mantle, scientists said. Understanding the composition of the mantle is essential to seismology, the study of earthquakes and movement below the Earth's surface, and should shed light on unexplained seismic phenomena observed there.

Though humans haven't yet managed to drill further than seven and a half miles into the Earth, we've built a comprehensive picture of what's beneath our feet through calculations and limited observation. We all live atop the crust, the thin outer layer; just beneath is the mantle, outer core and finally inner core. The lower portion of the mantle is the largest layer — stretching from 400 to 1,800 miles below the surface — and gives off the most heat. Until now, the entire lower mantle was thought to be composed of the same mineral throughout: ferromagnesian silicate, arranged in a type of structure called perovskite.

The pressure and heat of the lower mantle is intense — more than 3,500° Fahrenheit. Materials may have very different properties at these conditions; structures may exist there that would collapse at the surface.

To simulate these conditions, researchers use special facilities at the Advanced Photon Source, where they shine high-powered lasers to heat up the sample inside a pressure cell made of a pair of diamonds. Then they aim powerful beams of X-rays at the sample, which hit and scatter in all directions. By gathering the scatter data, scientists can reconstruct how the atoms in the sample were arranged.

The team found that at conditions that exist below about 1,200 miles underground, the ferromagnesian silicate perovskite actually breaks into two separate phases. One contains nearly no iron, while the other is full of iron. The iron-rich phase, called the H-phase, is much more stable under these conditions.

"We still don't fully understand the chemistry of the H-phase," said lead author and Carnegie Institution of Washington scientist Li Zhang. "But this finding indicates that all geodynamic models need to be reconsidered to take the H-phase into account. And there could be even more unidentified phases down there in the lower mantle as well, waiting to be identified."

The facilities at Argonne’s Advanced Photon Source were key to the findings, said Carnegie scientist Yue Meng, also an author on the paper. "Recent technological advances at our beamline allowed us to create the conditions to simulate these intense temperatures and pressures and probe the changes in chemistry and structure of the sample in situ," she said.

"What distinguished this work was the exceptional attention to detail in every aspect of the research — it demonstrates a new level for high-pressure research," Meng added.

The paper, "Disproportionation of (Mg,Fe)SiO3 perovskite in Earth’s deep lower mantle," was published in Science.Other Argonne coauthors were Wenjun Liu and Ruqing Xu.