Best View Yet Of Merging Galaxies In Distant Universe

Using the NASA/ESA Hubble Space Telescope and many other telescopes on the ground and in space, an international team of astronomers has obtained the best view yet of a collision that took place between two galaxies when the Universe was only half its current age.

They enlisted the help of a galaxy-sized magnifying glass to reveal otherwise invisible detail. These new studies of the galaxy H-ATLAS J142935.3-002836 have shown that this complex and distant object looks like the well-known local galaxy collision, the Antennae Galaxies.

The famous fictional detective Sherlock Holmes used a magnifying lens to reveal barely visible but important evidence. Astronomers are now combining the power of many telescopes on Earth and in space [1] with a vastly larger form of lens to study a case of vigorous star formation in the early Universe.

This diagram shows how the effect of gravitational lensing around a normal galaxy focuses the light coming from a very distant star-forming galaxy merger to created a distorted, but brighter view. 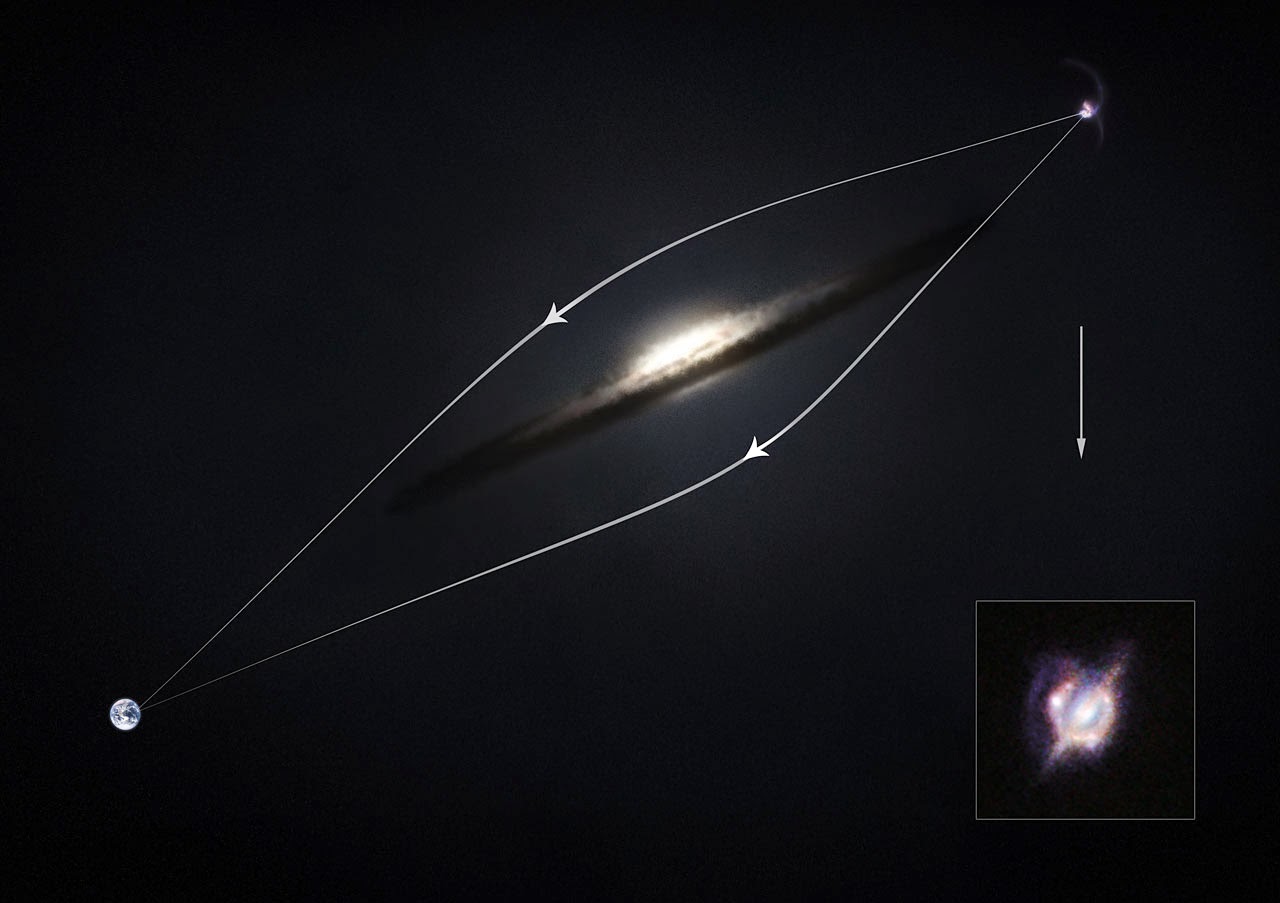 "While astronomers are often limited by the power of their telescopes, in some cases our ability to see detail is hugely boosted by natural lenses, created by the Universe," explains lead author Hugo Messias of the Universidad de Concepción (Chile) and the Centro de Astronomia e Astrofísica da Universidade de Lisboa (Portugal), "Einstein predicted in his theory of general relativity that, given enough mass, light does not travel in a straight line but will be bent in a similar way to light refracted by a normal lens."

These cosmic lenses are created by massive structures like galaxies and galaxy clusters, which deflect the light from objects behind them due to their strong gravity — an effect, called gravitational lensing. The magnifying properties of this effect allow astronomers to study objects that would not be visible otherwise and to directly compare local galaxies with much more remote ones, seen when the Universe was significantly younger.

This video takes the viewer deep into an apparently sparsely occupied region of the constellation of Virgo (The Virgin). Here at the centre, looking like many other faint spots, is a remarkable object, a gravitationally lensed view of a distant galaxy merger.

But for these gravitational lenses to work, the lensing galaxy, and the one far behind it, need to be very precisely aligned.

"These chance alignments are quite rare and tend to be hard to identify," adds Messias, "but, recent studies have shown that by observing at far-infrared and millimetre wavelengths we can find these cases much more efficiently."

This artist's impression shows how the effect of gravitational lensing by an intervening galaxy magnifies, brightens and distorts the appearance of a remote merging galaxy far behind it.

The viewpoint of the observer moves sideways so that that the distant galaxy merger appears first to one side, where it is faint, and then appears right behind the foreground object and is dramatically magnified and its total apparent brightness increases.

H-ATLAS J142935.3-002836 (or just H1429-0028 for short) is one of these sources and was found in the Herschel Astrophysical Terahertz Large Area Survey (H-ATLAS). It is among the brightest gravitationally lensed objects in the far-infrared regime found so far, even though we are seeing it at a time when the Universe was just half its current age.

Probing this object was at the limit of what is possible, so the international team of astronomers started an extensive follow-up campaign using the NASA/ESA Hubble Space Telescope alongside other space telescopes and some of the most powerful telescopes on the ground — including the Atacama Large Millimeter/submillimeter Array (ALMA), the Keck Observatory, the Karl Jansky Very Large Array (JVLA), and others. The different telescopes provided different views, which could be combined to get the best insight yet into the nature of this unusual object.

The Hubble and Keck images revealed a detailed gravitationally-induced ring of light around the foreground galaxy. These high resolution images also showed that the lensing galaxy is an edge-on disc galaxy — similar to our galaxy, the Milky Way — which obscures parts of the background light due to the large dust clouds it contains.

"We need to observe with Hubble to find cases of gravitational lensing and to highlight in high resolution the clues left by these huge cosmic lenses", adds Rob Ivison, co-author and ESO's Director for Science

But, it is not possible to see past the large dust clouds of the foreground galaxy with Hubble. The obscuration was overcome by ALMA and the JVLA, since these two facilities observe the sky at longer wavelengths, which are unaffected by dust. Using the combined data the team discovered that the background system was actually an ongoing collision between two galaxies.

Further characterisation of the object was undertaken by ALMA which traced carbon monoxide, allowing for detailed studies of star formation mechanisms in galaxies and for the motion of the material in the galaxy to be measured. This confirmed that the lensed object is indeed an ongoing galactic collision forming hundreds of new stars each year, and that one of the colliding galaxies still shows signs of rotation; an indication that it was a disc galaxy just before this encounter.

The system of these two colliding galaxies resembles the Antennae Galaxies an object much closer to us than H1429-0028 and which Hubble has imaged several times before in stunning detail. This is a spectacular collision between two galaxies, which are believed to have had a disc structure in the past. While the Antennae system is forming stars with a total rate of only a few tens of times the mass of our Sun each year, H1429-0028 each year turns more than 400 times the mass of the Sun of gas into new stars each year.

Ivison concludes: "With the combined power of Hubble and these other telescopes we have been able to locate this very fortunate alignment, take advantage of the foreground galaxy's lensing effects and characterise the properties of this distant merger and the extreme starburst within it. It is very much a testament to the power of telescope teamwork."
Notes