Astronomers and students have found a bridge of atomic hydrogen gas 2.6 million light years long between galaxies 500 million light years away. They detected the gas using the William E. Gordon Telescope at the Arecibo Observatory, a radio astronomy facility of the US National Science Foundation sited in Puerto Rico. The team publish their results today in a paper in Monthly Notices of the Royal Astronomical Society.

The bridge of gas (shown in green) stretches from the large galaxy at the bottom left to the group of galaxies at the top. A third nearby galaxy to the right also has a shorter stream of gas attached to it. The three insets show expanded views of the different galaxies and the green circle indicates the Arecibo telescope beam. 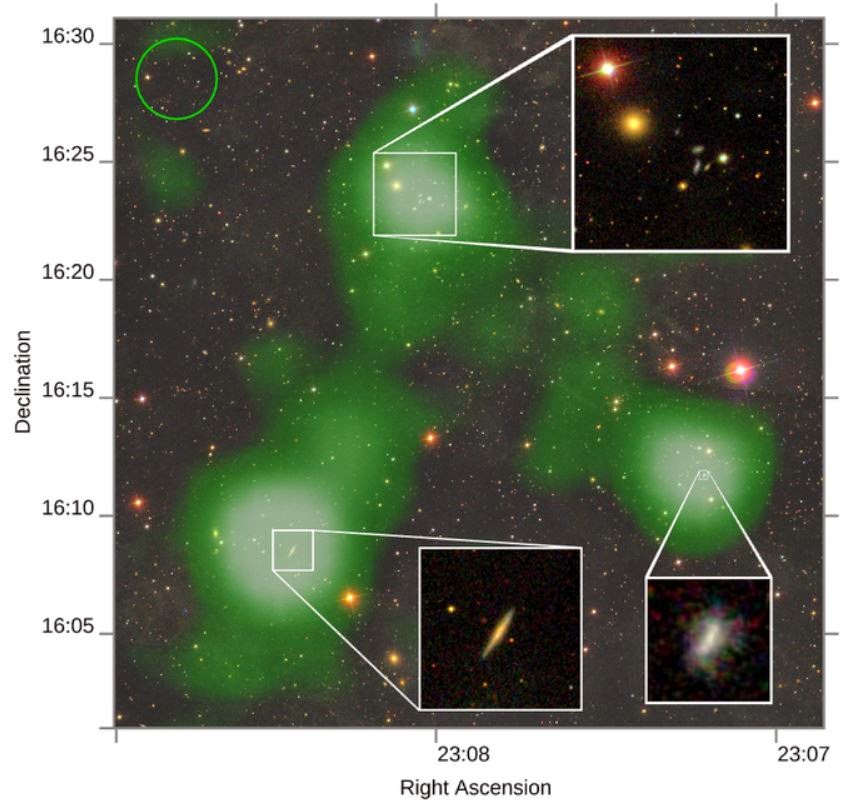 The stream of atomic hydrogen gas is the largest known, a million light years longer than a gas tail found in the Virgo Cluster by another Arecibo project a few years ago. Dr Rhys Taylor, a researcher at the Czech Academy of Sciences and lead author of the paper, said "This was totally unexpected. We frequently see gas streams in galaxy clusters, where there are lots of galaxies close together, but to find something this long and not in a cluster is unprecedented."

It is not just the length of the stream that is surprising but also the amount of gas found in it. Roberto Rodriguez, a 2014 graduate from the University of Puerto Rico in Humacao who worked on the project as an undergraduate, explained "We normally find gas inside galaxies, but here half of the gas – 15 billion times the mass of the Sun – is in the bridge. That’s far more than in the Milky Way and Andromeda galaxies combined!"

The team is still investigating the origin of the stream. One notion surmises that the large galaxy at one end of the stream passed close to the group of smaller galaxies at the other end in the past, and that the gas bridge was drawn out as they moved apart. A second notion suggests that the large galaxy plowed straight through the middle of the group, pushing gas out of it. The team plan to use computer simulations to find out which of these ideas can best match the shape of the bridge that is seen with the Arecibo Telescope.

The project involved three undergraduate researchers: Roberto Rodriguez and Clarissa Vazquez from UPR Humacao, and Hanna Herbst, now a graduate student at the University of Florida. Dr Robert Minchin, a staff astronomer at Arecibo Observatory and the principal investigator on the project, said "Student involvement is very important to us. We are proud to be inspiring the next generation of astronomers, and particularly proud of the involvement of Puerto Rican students."

The bridge was found in data taken between 2008 and 2011 for the Arecibo Galaxy Environment Survey (AGES), which is using the power of the Arecibo Telescope to survey a large area of sky with a high level of sensitivity.