Most bacteria living in the gut play a positive role in promoting a healthy immune system, but antibiotic treatments often do not discriminate between good and bad bacteria. The study published today in Journal of Allergy and Clinical Immunology helps scientists understand how different antibiotics affect good bacteria. 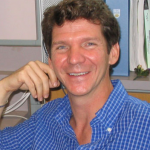 “This is the first step to understanding which bacteria are absolutely necessary to develop a healthy immune system later in life,” says Kelly McNagny, a professor in the Dept. of Medical Genetics who led the research along with UBC microbiologist Brett Finlay.

The researchers tested the impact of two antibiotics, vancomycin and streptomycin, on newborn mice. They found that streptomycin increased susceptibility to a disease known as hypersensitivity pneumonitis later in life, but vancomycin had no effect.

The difference in each antibiotic’s long-term effects can be attributed to how they changed the bacterial ecosystem in the gut. Hypersensitivity pneumonitis is an allergic disease found in people with occupations such as farming, sausage-making, and cleaning hot tubs.

The researchers stress that infants should be treated with antibiotics when needed, but they hope these results will help pinpoint which bacteria make us less susceptible to disease. This could open up the possibility of boosting helpful bacteria through the use of probiotics.

“Probiotics could be the next big trend in parenting because once you know which bacteria prevent disease, you can make sure that children get inoculated with those bacteria,” says McNagny.

This research was supported by the Canadian Institutes of Health Research and AllerGen NCE, a national research network funded by Industry Canada through the Networks of Centres of Excellence (NCE) Program.