Just after midnight on August 29,  a fissure eruption started in the Northern part of Holuhraun lava, between Dyngjujökull Glacier and the Askja caldera, North of Vatnajökull glacier. The fissure is 300 meters long and in direction Northeast and Southwest.
No volcanic ash has been detected with the radar system at the moment. The wind field conditions in the area are wind blowing toward NW at 12 m/s at 5 km altitude. Seismic eruption tremor is low indicating effusive eruption without significant explosive activity.

Scientists who have been at work close to the eruption monitor the event at a safe distance. The Coast Guard aircraft, TF-SIF is scheduled to take off at 9:30 this morning. The Icelandic Met Office has raised the aviation colorcode over the eruption site to red and the Icelandic Air Traffic Contol has closed down the airspace from the earth up to 18000 feet for instrumental flights (see picture below).

The National Crisis Coordination Center is active and the Commissioner of the Icelandic Police has raised the Civil Protection Phase to Emergency Phase in collaboration with the District Commissioner in Husavík..

About an hour later the  ÍSAVÍA No-fly zone for instrumental flight was reevaluated and can be seen on the map. It is smaller than before, Akureyri airport is no longer under restrictions and the height of the zone now only reaches 5000 feet. 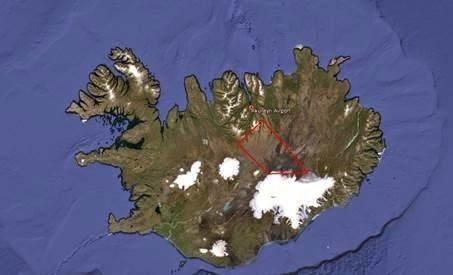