The Greenland Ice Sheet is a 1.7 million-square-kilometer, 2-mile thick layer of ice that covers Greenland. Its fate is inextricably linked to our global climate system.

In the last 40 years, ice loss from the Greenland Ice Sheet increased four-fold contributing to one-quarter of global sea level rise. Some of the increased melting at the surface of the ice sheet is due to a warmer atmosphere, but the ocean’s role in driving ice loss largely remains a mystery.

Sermilik Fjord, into which Helheim Glaciers drains, in August 2011. 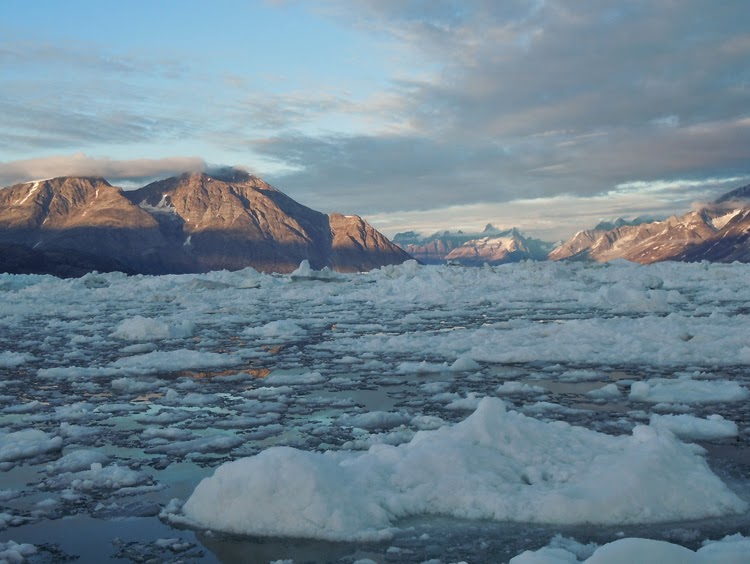 Research by scientists at Woods Hole Oceanographic Institution (WHOI) and the Univ. of Oregon sheds new light on the connection between the ocean and Greenland’s outlet glaciers, and provides important data for future estimates of how fast the ice sheet will melt and how much mass will be lost. The study was published today in Nature Geosciences.

“Over the past few decades, many glaciers that drain the Greenland Ice Sheet have accelerated, thinned and retreated,” said the study’s lead author, Rebecca Jackson, a graduate student in the MIT-WHOI joint program in oceanography. “Scientists have noticed a link between glacier behavior and warming waters off the coast of Greenland, but we have very few direct measurements of ocean waters near the glaciers or at what time scales they vary, which are needed to understand what’s happening there.”

Icebergs in Sermilik Fjord, near the terminus of Helheim Glacier, in August 2013. 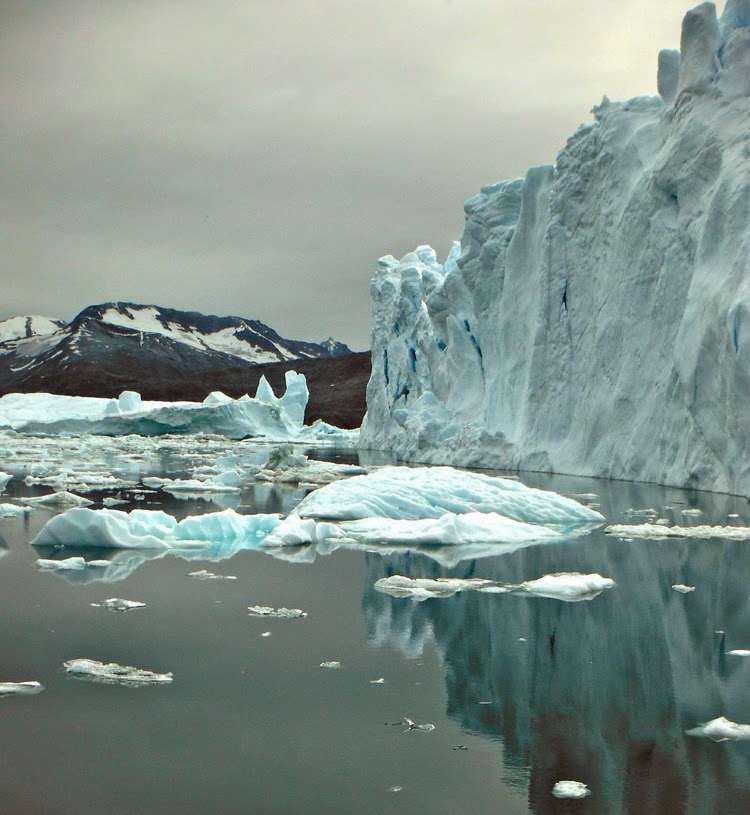 Currently, scientists think that the accelerated rate of ice sheet melt might be due to warmer ocean waters melting on the underside of the ice, where the glaciers extend into the ocean. Little, however, is known about this “submarine melting” – it has not been directly measured at any of Greenland’s major outlet glaciers, and scientists have limited information about the ocean temperature or circulation near the glaciers, which, they think, will impact the melt rate.

To begin to tease apart the mechanisms in this dynamic system, scientists needed more data.

Between 2009 and 2013, the study’s co-authors –Jackson, WHOI physical oceanographer Fiamma Straneo and David Sutherland from University of Oregon – deployed multiple moorings in two fjords where the third and fifth largest outlet glaciers of the Greenland Ice Sheet terminate.

In one study site, moorings were located in the middle of the fjord, in the upper fjord toward the glacier, and on the shelf outside the fjord. At the second study site, a cluster of moorings were deployed in the middle of the second fjord. The moorings collected extensive measurements of temperature and salinity at various water depths, with some measured ocean currents -- the first data to provide information about the fjords’s conditions from fall through the spring.

“Almost all previous studies of Greenland’s fjords were conducted during the summer when the waters are fairly calm, and were relatively brief – with no information about how fast water properties change or what drives those changes,” Jackson noted.

From their analysis of the data, the researchers found rapid fluctuations in ocean temperature near the glaciers, resulting from “surprisingly” fast ocean currents in the fjords. The fjord currents, which reverse every few days, are driven by winds and ocean currents outside the fjord. These findings imply that changes in temperature in the ocean waters outside the fjord can be rapidly communicated to the glacier, through an efficient pumping of new water into the fjord.

“We see much more variability in the upper fjord than we would have expected,” Jackson said. “Our findings go against the prevailing paradigm that focused on the input of freshwater to the fjord as a driver of new water into the fjord.”

Furthermore, the observed variability in ocean properties near the glaciers suggests large and rapid fluctuations in submarine melt rates. The scientists suspect the melt rate of the glacier varies with the temperature of the water near the glacier.

“These observations of ocean conditions near outlet glaciers are one step towards a better understanding of submarine melting and the impact of the ocean on the Greenland Ice Sheet,” Jackson said.

The research was funded by the National Science Foundation and the WHOI Ocean Climate Change Institute.