A combined NASA and European Space Agency (ESA)-funded study has found firm evidence that nitrogen in the atmosphere of Saturn’s moon Titan originated in conditions similar to the cold birthplace of the most ancient comets, called the Oort cloud. The finding rules out the possibility that Titan’s building blocks formed within the warm disk of material thought to have surrounded the infant planet Saturn during its formation.

Saturn's fourth-largest moon, Dione, can be seen through the haze of the planet's largest moon, Titan, in this view of the two posing before the planet and its rings from NASA's Cassini spacecraft. 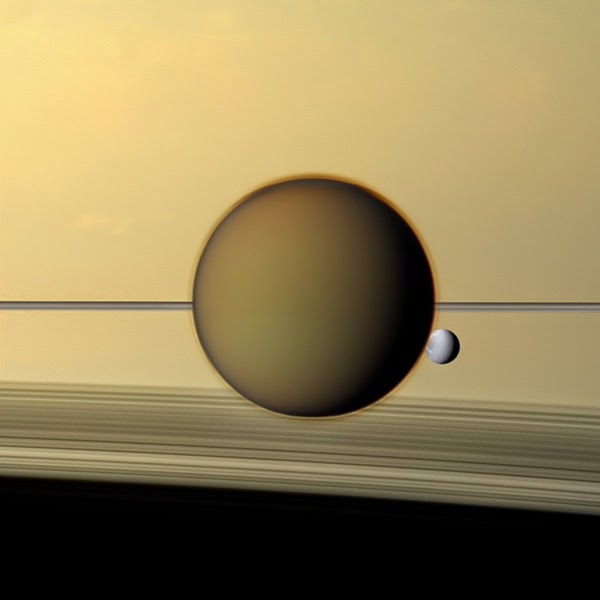 The main implication of this new research is that Titan’s building blocks formed early in the solar system’s history, in the cold disk of gas and dust that formed the sun. This was also the birthplace of many comets, which retain a primitive, or largely unchanged, composition today.

The research, led by Kathleen Mandt of Southwest Research Institute in San Antonio, was published this week in the Astrophysical Journal Letters. Co-authors on the study include colleagues from France's National Center for Scientific Research (CNRS) and Observatoire de Paris.

Nitrogen is the main ingredient in the atmosphere of Earth, as well as on Titan, and the planet-sized moon of Saturn is frequently compared to an early version of Earth, locked in a deep freeze.

The paper suggests that information about Titan’s original building blocks is still present in the icy moon’s atmosphere, allowing researchers to test different ideas about how it might have formed. Mandt and colleagues demonstrate that a particular chemical hint as to the origin of Titan’s nitrogen should be essentially the same today as when this moon formed, up to 4.6 billion years ago. That hint is the ratio of one isotope, or form, of nitrogen, called nitrogen-14, to another isotope, called nitrogen-15.

The team finds that our solar system is not old enough for this nitrogen isotope ratio to have changed significantly. This is contrary to what scientists commonly have assumed.

“When we looked closely at how this ratio could evolve with time, we found that it was impossible for it to change significantly. Titan’s atmosphere contains so much nitrogen that no process can significantly modify this tracer even given more than four billion years of solar system history,” Mandt said.

The small amount of change in this isotope ratio over long time periods makes it possible for researchers to compare Titan’s original building blocks to other solar system objects in search of connections between them.

As planetary scientists investigate the mystery of how the solar system formed, isotope ratios are one of the most valuable types of clues they are able to collect. In planetary atmospheres and surface materials, the specific amount of one form of an element, like nitrogen, relative to another form of that same element can be a powerful diagnostic tool because it is closely tied to the conditions under which materials form.

The study also has implications for Earth. It supports the emerging view that ammonia ice from comets is not likely to be the primary source of Earth’s nitrogen. In the past, researchers assumed a connection between comets, Titan and Earth, and supposed the nitrogen isotope ratio in Titan’s original atmosphere was the same as that ratio is on Earth today. Measurements of the nitrogen isotope ratio at Titan by several instruments of the NASA and ESA Cassini-Huygens mission showed that this is not the case — meaning this ratio is different on Titan and Earth — while measurements of the ratio in comets have borne out their connection to Titan. The findings mean the sources of Earth’s and Titan’s nitrogen must have been different.

Other researchers previously had shown that Earth’s nitrogen isotope ratio likely has not changed significantly since our planet formed.

“Some have suggested that meteorites brought nitrogen to Earth, or that nitrogen was captured directly from the disk of gas that formed the sun. This is an interesting puzzle for future investigations,” Mandt said.

Mandt and colleagues are eager to see whether their findings are supported by data from ESA’s Rosetta mission, when it studies comet 67P/ Churyumov-Gerasimenko beginning later this year. If their analysis is correct, the comet should have a lower ratio of two isotopes — in this case of hydrogen in methane ice — than the ratio on Titan. In essence, they believe this chemical ratio on Titan is more similar to Oort cloud comets than comets born in the Kuiper Belt, which begins near the orbit of Neptune (67P/ Churyumov-Gerasimenko is a Kuiper Belt comet).

“This exciting result is a key example of Cassini science informing our knowledge of the history of solar system and how the Earth formed,” said Scott Edgington, Cassini Deputy Project Scientist at NASA’s Jet Propulsion Laboratory, Pasadena, California.

The Cassini-Huygens mission is a cooperative project of NASA, the European Space Agency and the Italian Space Agency. JPL, a division of the California Institute of Technology, Pasadena, manages the mission for NASA’s Science Mission Directorate in Washington.

Rosetta is an ESA mission with contributions from its member states and NASA. JPL manages the U.S. contribution of the Rosetta mission for NASA’s Science Mission Directorate in Washington.