An international team of astronomers, using data from several NASA and European Space Agency (ESA) space observatories, has discovered unexpected behavior from the supermassive black hole at the heart of the galaxy NGC 5548, located 244.6 million light-years from Earth. This behavior may provide new insights into how supermassive black holes interact with their host galaxies.

In this illustration, the position of a dark, absorbing cloud of material is located high above the supermassive black hole and accretion disk in the center of the active galaxy NGC 5548. Numerous other filaments twist around the black hole as they are swept away by a torrent of radiation "winds." 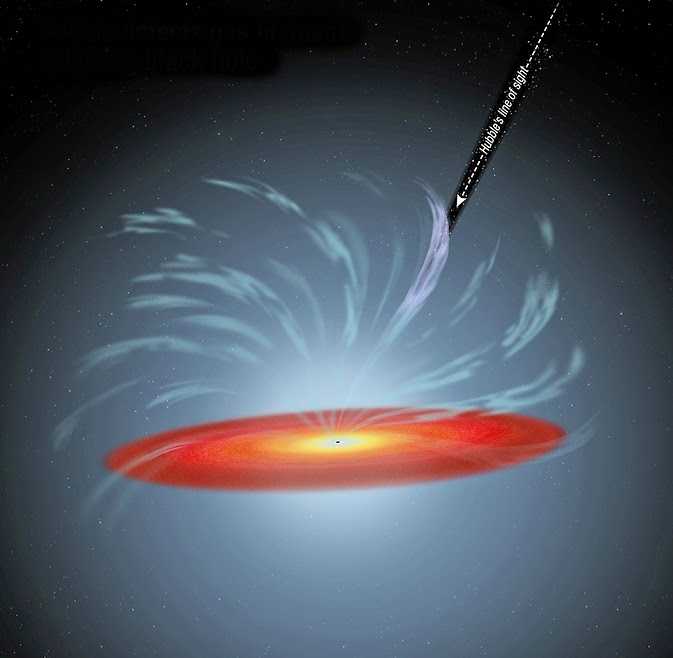 "The data represented dramatic changes since the last observation with Hubble in 2011," said Gerard Kriss of the Space Telescope Science Institute (STScI) in Baltimore, Maryland. "I saw signatures of much colder gas than was present before, indicating that the wind had cooled down due to a significant decrease in X-ray radiation from the galaxy's nucleus."

After combining and analyzing data from all six sources, the team was able to put together the pieces of the puzzle. Supermassive black holes in the nuclei of active galaxies, such as NGC 5548, expel large amounts of matter through powerful winds of ionized gas. For instance, the persistent wind of NGC 5548 reaches velocities exceeding 621 miles (approximately 1,000 kilometers) a second. But now a new wind has arisen, much stronger and faster than the persistent wind.

This is the galaxy known as NGC 5548. At its heart, though not visible here, is a supermassive black hole behaving in a strange and unexpected manner. Researchers detected a clumpy gas stream flowing quickly outwards and blocking 90 percent of the X-rays emitted by the black hole. This activity could provide insights into how supermassive black holes interact with their host galaxies. 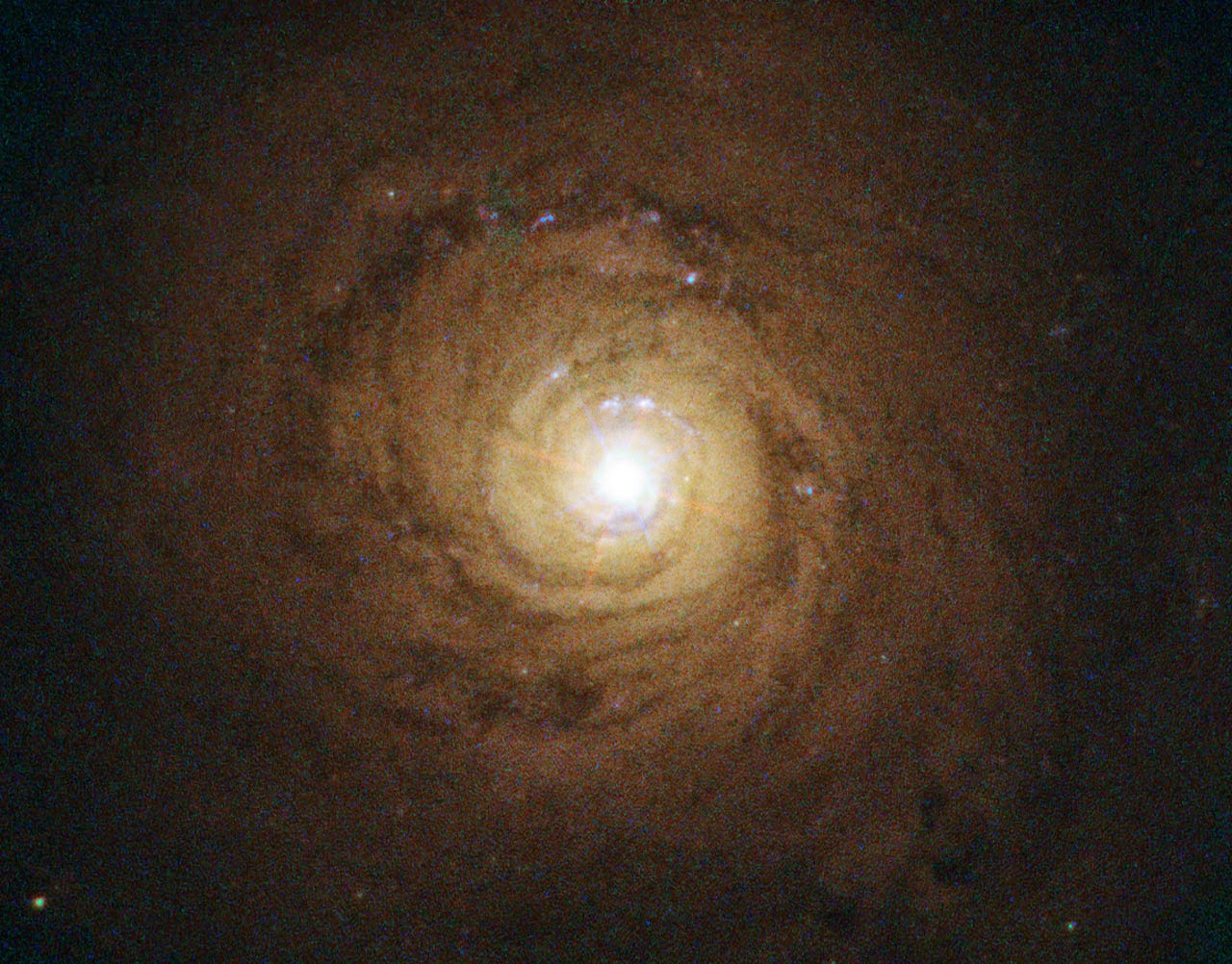 "These new winds reach speeds of up to 3,107 miles (5,000 kilometers) per second, but is much closer to the nucleus than the persistent wind," said lead scientist Jelle Kaastra of the SRON Netherlands Institute for Space Research. "The new gas outflow blocks 90 percent of the low-energy X-rays that come from very close to the black hole, and it obscures up to a third of the region that emits the ultraviolet radiation at a few light-days distance from the black hole."

The newly discovered gas stream in NGC 5548 -- one of the best-studied of the type of galaxy know as Type I Seyfert -- provides the first direct evidence of a shielding process that accelerates the powerful gas streams, or winds, to high speeds. These winds only occur if their starting point is shielded from X-rays.

It appears the shielding in NGC 5548 has been going on for at least three years, but just recently began crossing their line of sight.

"There are other galaxies with similar streams of gas flowing outward from the direction of its central black hole, but we've never before found evidence that the stream of gas changed its position as dramatically as this one has," said Kriss. "This is the first time we've seen a stream like this move into our line of sight. We got lucky."

Researchers also deduced that in more luminous quasars, the winds may be strong enough to blow off gas that otherwise would have become "food" for the black hole, thereby regulating both the growth of the black hole and that of its host galaxy.

The researchers say that this is the first direct evidence for the long-predicted shielding process that is needed to accelerate powerful gas streams, or winds, to high speeds. “This is a milestone in understanding how supermassive black holes interact with their host galaxies,” says Jelle Kaastra of the SRON Netherlands Institute for Space Research, who led the research team. “We were very lucky. You don’t normally see this kind of event with objects like this. It tells us more about the powerful ionised winds that allow supermassive black holes in the nuclei of active galaxies to expel large amounts of matter. In larger quasars than NGC 5548, these winds can regulate the growth of both the black hole and its host galaxy.”

As matter spirals down into a black hole it forms a flat disc, known as an accretion disc. The disc is heated so much that it emits X-rays, near to the black hole, and less energetic ultraviolet radiation further out. The ultraviolet radiation can create winds strong enough to blow gas away from the black hole, which otherwise would have fallen into it. But, the winds only come into existence if their starting point is shielded from X-rays.

Earlier observations had seen the effects of both X-rays and ultraviolet radiation on a region of warm gas for away from the black hole, but these most recent observations have shown the presence of a new gas stream between the disc and the original cloud. The newly discovered gas stream in the archetypal Seyfert galaxy NGC 5548 — one of the best-studied sources of this type over the past half-century — absorbs most of the X-ray radiation before it reaches the original cloud, shielding it from X-rays and leaving only the ultraviolet radiation. The same stream shields gas closer to the accretion disc. This makes the strong winds possible, and it appears that the shielding has been going on for at least three years.

Directly after Hubble had observed NGC 5548 on 22 June 2013, the team discovered unexpected features in the data. “There were dramatic changes since the last observation with Hubble in 2011. We saw signatures of much colder gas than was present before, indicating that the wind had cooled down, due to a strong decrease in the ionising X-ray radiation from the nucleus,” said team member Gerard Kriss of the Space Telescope Science Institute in Baltimore, USA.

After combining and analysing data from the six observatories involved, the team was able to put the pieces of the puzzle together. NGC 5548’s persistent wind, which has been known about for two decades, reaches velocities exceeding 3.5 million kilometres per hour. But, a new wind has arisen which is much stronger and faster than the persistent wind.

“The new wind reaches speeds of up to 18 million kilometres per hour, but is much closer to the nucleus than the persistent wind,” says Kaastra. “The new gas outflow blocks 90 percent of the low-energy X-rays that come from very close to the black hole, and it obscures up to a third of the region that emits the ultraviolet radiation at a distance of a few light-days from the black hole.”

Strong X-ray absorption by ionised gas has been seen in several other sources, and it has been attributed for instance to passing clouds. “However, in our case, thanks to the combined XMM-Newton and Hubble data, we know this is a fast stream of outflowing gas very close to the nucleus,” said team member Massimo Cappi, of INAF-IASF Bologna. “It may even originate from the accretion disc,” added team member Pierre-Olivier Petrucci, of CNRS, IPAG Grenoble.

These results are being published online in the 19 June issue of Science Express.

The Hubble Space Telescope is a project of international cooperation between NASA and the European Space Agency. NASA's Goddard Space Flight Center in Greenbelt, Maryland, manages the telescope. STScI conducts Hubble science operations and is operated for NASA by the Association of Universities for Research in Astronomy, Inc., in Washington.