Previously, as with the longitude problem 300 years earlier for fixing locations on Earth, there was no unified system of reference for calibrating the heavens.

But now, when investigating the atmospheric structure and chemical make-up of stars, astronomers can use a new stellar scale as a 'ruler' – making it much easier for them to classify and compare data on star discoveries.

The first standardized way to measure stars has been developed for Gaia mission. 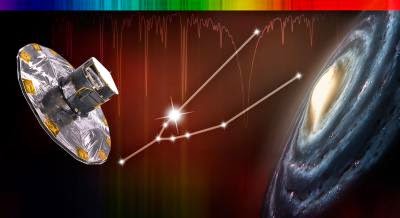 In fact, the work is a critical first step in the Gaia satellite's mission to map the Milky Way, as the unprecedented levels of stellar data that will result need "consistent stellar parameters", the same way we need values to measure everything from temperature to time, say astronomers.

The guidelines are free to download and are already being used by the world's largest astronomy projects. The work has recently been published in the journal Astronomy & Astrophysics.

The team, including Dr Paula Jofre from the University of Cambridge's Institute of Astronomy, selected 34 initial 'benchmark' stars to represent the different kinds of stellar populations in our galaxy, such as hot stars, cold stars, red giants and dwarfs, as well as stars that cover the different chemical patterns – or 'metallicity' – in their spectrum, as this is the "cosmic clock" which allows astronomers to read a star's age.

This detailed range of information on the 34 stars form the first value set for measuring the millions of stars Gaia aims to catalogue. Many of the benchmark stars can be seen with the human eye, and have been studied for most of human history – dating back to the very first astronomical records from ancient Babylon.

"We took stars which had been measured a lot so the parameters are very well-known, but needed to be brought to the same scale for the new benchmark - essentially, using the stars we know most about to help measure the stars we know nothing about," said Jofre.

"In previous galactic studies, the Sun is used as the standard to show a method is working, along with a few other well-known stars. But I choose this one because it works for my method, you choose a different one for different reasons; data may not match.

"This is the first attempt to cover a wide range of stellar classifications, and do everything from the beginning – methodically and homogenously."

Launched at the end of last year, Gaia will gather data on over a billion stars in the Milky Way, allowing astronomers to study for the first time in close detail its myriad stars and planetary systems. Petabytes of data will be sent back to Earth – roughly the equivalent of all the information held in all the libraries of the world today.

The new value system was needed to ensure that analysis of this extraordinary amount of data is done in the most effective and efficient way, a template to measure the vast stream of data against.

Jofre focused on spectroscopic data to work out metallicity: the chemical combination that makes up a star. Just as a raindrop can split sunlight into the colours of the rainbow, spectroscopes split the light from a star into its chemical elements – and the results can be read like a musical score, with high notes or low notes in the scale giving clues as to the star's age. On average, the higher a star's metal content the younger it is.

Jofre created a 'spectral' library, combining the best data on the atmospheric structure of benchmark stars to determine a uniform scale for metallicity. Together with definitive scales for the stars' temperatures and surface gravities, produced with colleagues at the University of Uppsala and the University of Bordeaux, her work completes the measuring system that will be used to gauge data from Gaia.

"Now this set of data scales for the benchmark stars can be used as a way of making definitive measurements of others stars – invaluable to astronomers working on a wide range of projects," Jofre said.

The benchmark stars are already being used as a standardising model by Gaia's sister project, the Gaia-ESO survey, which is observing stellar spectra at a high resolution from the Very Large Telescope in Chile. They will also provide the basis for the thousands of reference stars needed to set the parameters for the hugely ambitious Gaia satellite once it starts mapping the entire galaxy – the "pillars for the enormous calibrators".

The fact that the ideal benchmark stars needed to be ones we already have a lot of data on means that many are bright and relatively near to the Earth – and have been the subject of wonder across civilisations.

Aldebaran, Arcturus, Pollux, Procyon and Alpha Centauri have played a part in the culture and mythology of mankind since they were first identified thousands of years ago. Babylonian astronomers used them as a reference point to describe the positions of the moon and planets as they moved through the night sky, appearing in the Babylonian Astronomical Diaries dating back to almost 1000 years BC.

"Many people interested in astronomy know these stars, their position in constellations, and the best time of year to see them. It is amazing that there is still so much to learn about the physics of these most well-known stars," said Dr. Ulrike Heiter from the Uppsala University.

"While stars do move over millennia, for humans they are fixed points – used to navigate the Earth for centuries. We are still using them as fixed points, but this time for navigating the galaxy," Jofre said.

UK Gaia lead Professor Gerry Gilmore added: "Advances in understanding the history and structure of our Galaxy with ambitious projects are possible only because, like Newton, we see farther by standing on the shoulders of giants. For reliably determining what chemical elements the stars are made of, those giants are the benchmark stars. All our vastly expanding knowledge depends on really understanding the few."

Contacts and sources:
Fred Lewsey
University of Cambridge
on June 23, 2014