The approval of a new treatment method by which three parents will be able to beget a child is being discussed since a few years in Great Britain and will possibly become a reality in two years. The method is supposed to help in eliminating the mother's genetic defects already in the test tube. The defect lies in so-called mitochondria, the "power houses" of cells.

Already a few dysfunctional mitochondria (in yellow on top of the picture) could cause a disease by overgrowing functional ones (in blue). 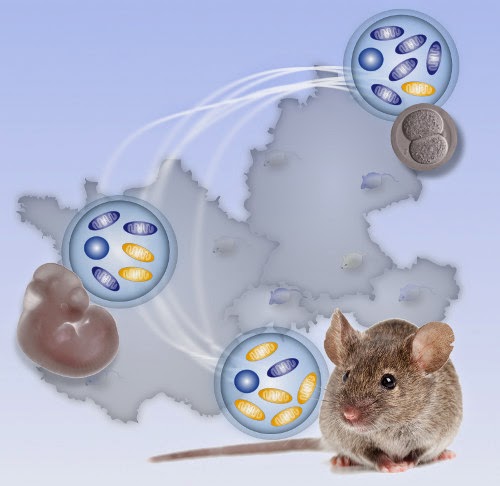 Mitochondria are cell organelles located within animal and human cells. They produce energy for the organism, possess their own genetic material - mitochondrial DNA (mtDNA) - and are transmitted exclusively by the mother. Depending on their activity and tasks, different numbers of mitochondria are present in a cell - usually a few hundred to a thousand per body cell.

Jörg Burgstaller, a scientist and member of Gottfried Brem's research group at the Vetmeduni Vienna, has been working for several years on the genetics of mitochondria. It was known before that different types of mitochondria within a cell can proliferate at different rates. However, it was not known whether this is a singular phenomenon or if these cases occur more frequently.

Burgstaller investigated this in four newly bred mouse models which carried different mixtures of mitochondria whose DNA were related to each other to a differing extent. This meant no health problem for the mice since all mtDNAs are were fully functional.

The effect is of significance in reproduction medicine

However, this method raises the following problem: in every nuclear transfer, a small number of defective mitochondria are transferred into the healthy egg cell. "So far it was believed that this minimal ‘contamination’ is of no consequence for the baby. However, our data show that the effect may have dramatic consequences on the health of the offspring.

If the mitochondria of both mothers are genetically very different, it may have the same effects seen in the mouse model," says Burgstaller who developed the theory together with co-author Joanna Poulton, Professor of Mitochondrial Genetics at the John Radcliffe Hospital in Oxford. "One mitochondrial type may be able to assert itself against the other. If the assertive one happens to carry the defective mtDNA, the benefit of the therapy would be jeopardized."

The solution to the "Three-Parent Baby"-problem

Burgstaller and his colleagues suggest the following solution to the problem: the mtDNA of both mothers, i.e. the donor of the nucleus and the donor of the mitochondria, should be analyzed in advance and aligned to each other. So called “machting haplotypes” could prevent the dangerous effect. In the future the effect may even be utilized in a targeted manner to suppress defective mtDNA.

The work was conducted in cooperation with BIAT (Biomodels Austria) and the technology platform Vetcore at Vetmeduni Vienna, Joanna Poulton from John Radcliffe Hospital in Oxford, Jaroslav Piálek from the Czech Academy of Sciences, and Iain Johnston and Nick Jones from the Imperial College (London).